I would be interested to see your take on how transit systems can better integrate bicycles into their plans to solve ‘last mile’ issues. Even on systems I’ve used that are relatively welcoming to bikes (see Berlin) it always appears to be something of an after thought and the awkwardness seems to discourage multi-modal riders.

Since I am primarily a bicycle advocate, I’m also interested to hear any thoughts on how the bicycle advocacy groups could work better with transit system operators to improve both sets of infrastructure since they do seem to be mutually supporting when properly integrated.

As a transit planner, I’m excited by the potential to dramatically expand the reach of transit networks through the use of cycling — especially in lower-density areas where adequate local bus service is rarely viable.  There are three broad parts to the problem:

Transit agencies should care about this, because a sufficient uptake of local cycling could substantially reduce the demand for local all-day buses services in low-density areas — typically the least efficient services a transit agency runs, in terms of cost per passenger.

Getting to/from the station

Cycling for local access requires (a) focusing on short local trips and (b) on a kind of cycling that will appeal to a broad segment of the population.  That means safe routes that are designed for relatively slow speeds, not just painted bike lanes next to traffic on high-speed arterials.   In general, cycling for station access needs more of the features of European cycling infrastructure.  A Dutch planner once told me that the Dutch bicycle network is designed for a 60-year old woman with two bags of groceries, and that’s a good guideline.

Cycling advocacy organisations have a crucial role here, because if their agenda is driven too exclusively by the athletic cyclist who values speed, it won’t yield the kind of infrastructure that will appeal to the diverse range of people who could be attracted to local cycling, both for errands and for rapid transit access.

Lower-density areas often have plenty of space for local cycling infrastructure, if it’s thought about carefully, ideally as a development is being designed. 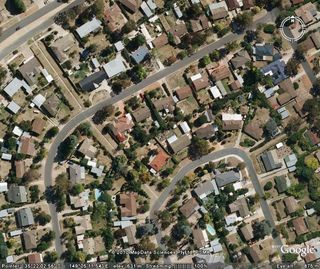 n Australia’s national capital, Canberra, I’ve worked for the last couple of years on re-organizing the system to create high-frequency rapid bus services in the major corridors.  While these corridors connect small high-density nodes to each other, most of Canberra is very low-density.  At first glance, you’d mistake most Canberra neighbourhoods for any typical 50s suburb: gently curving streets, lots of cul-de-sacs, houses on large blocks.  But unlike your typical suburb, the city is densely laced with off-street pedestrian and bike routes, and these give cycling a huge advantage there.

In this image, for example, the arterial in the far upper left corner has a ped-bike link extending southeast into the neighborhood, perpendicular to the pattern of curving streets, so that bikes have a much more direct path through a neighborhood than cars have to take.  Many of these short links also connect to a city-wide off-road bike network.  We’re finding a lot of interest in bicycle access to the rapid bus system because Canberra is already a great city for cycling, especially in the low-density areas where local buses will never compete with it.

Labyrinth street patterns that prevent through car traffic are still very popular in new suburbs, but they should always be built with these simple ped-bike connections through long blocks, so that from a ped-bike standpoint, the neighborhood becomes a grid permitting direct paths of travel.

Navigation is also criticial; a
good bike network has extensive navigational signs.  These need to include signs readily apparent wherever you exit from rapid transit.  The transit agency may control rapid transit stations and thus need to care about the inclusion of bike navigation signage there.

This is an important option, but remember: Successful transit is crowded!  Depending on the overall ridership and peak-demand patterns, most rapid transit agencies will need to impose some limits on bringing non-folding bikes on board, because they take so much space.

Buses rarely allow bikes on-board, even at low-demand times, but if Bus Rapid Transit is intended to fully imitate all the attractions of light rail, perhaps it should imitate this one as well.  In general, this requires an interior design that includes substantial side-facing seating so that at low-demand times there’s room to sit with your bicycle, and also adequate opportunites to stand with a bike while holding it.

Bike racks on the exterior of buses are only useful if every rapid bus has them.  Even so, their capacity is so limited that you can only count on them if they’re not very popular.  This is one of those features that only works as long as not many people use it — and those, by definition, don’t scale to the kind of future we’re planning for.

It’s not hard to provide bike racks at stations, but in North American and Australasian cycling culture the expense and quality of bicycles makes security a concern.  Bikes left in racks get stolen and vandalized.  Fully enclosed bike lockers take a lot of space and a lot of administrative effort, and don’t really serve spontaneous travel.
One common compromise is the “bike cage,” a secured caged area with room for many bikes.  Still, that’s something you have to register for and administer, so it usually happens only at workplaces.

One of the most interesting options is the “bike station,” essentially a space in a rapid transit station designed to be leased to a bike repair business.  The business provides staffed storage in the course of its other functions, and has space to store a lot of bicycles.  It’s a win-win.  Berkeley BART station was one of the first in North America.  They’re now being designed into major Brisbane Busway stations.  These only work where the business is viable, but cycling can still cover a large area if these stations are properly chosen. 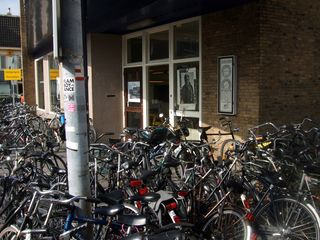 Other than this, the European approach to the bike storage problem — consistent with their emphasis on low-speed cycling — is simple:  Really cheap bicycles!

This mass of bicycles outside Haarlem rail station in the Netherlands consists mostly of a standard super-cheap bike that’s simply not worth stealing, so a basic bike lock is adequate to protect it.   It has one gear and no brakes; to stop, you pedal backwards.  (Yes, I was scared too, the first time I tried it, but you figure it out.  The main inconvenience is that when stopped at a light, you can’t backpedal to position your foot for starting.   To do this, you have to pick up the bike.)  It’s not trying to be fast or sexy, but it’s fine for ambling around at low speeds that are still much faster than walking.

At the home end of your trip, you need your own bike, but at the destination end one crucial tool is a bicycle-rental option, such as the Parisian Vélib system, which allows you to rent a bicycle for a one way trip, such as you are likely to be making from a transit station.  Vélib of course is a citywide system that depends on scale; there are stations everywhere in the city, which is why you can use the system to go almost anywhere.  Scaling this to lower-density places such as business parks may require a different model, possibly one based on all-day rental from a kiosk at the transit-station. 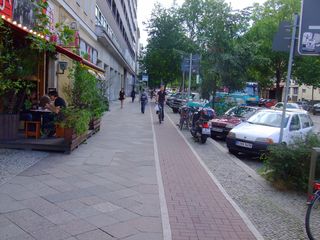 A Portland bike planner told me recently that the city is now looking at European-style low-speed bike paths.  These are generally separate from the street but adjacent to the sidewalk, like this one in Berlin, so they are slower and safer than on-street cycling.  These should also be looked at wherever the access to a rapid transit station is the goal.

In general, if you design your infrastructure for a 60-year old woman with two bags of groceries, you can make cycling attractive to a huge range of the population, and that really will help address the “last mile” problem.

Human Transit: The First Year
Quote of the Week

33 Responses to Can We Cycle the “Last Mile”?

You are here: Home › Can We Cycle the “Last Mile”?