The Transport Politic has a good overview of the recently announced rapid transit plans for San Diego.  The plan, in short, is to add only one more line to the region’s light rail system, a long northward extension to the huge University of California San Diego (UCSD) campus.   For other corridors in the region, the focus is Bus Rapid Transit. 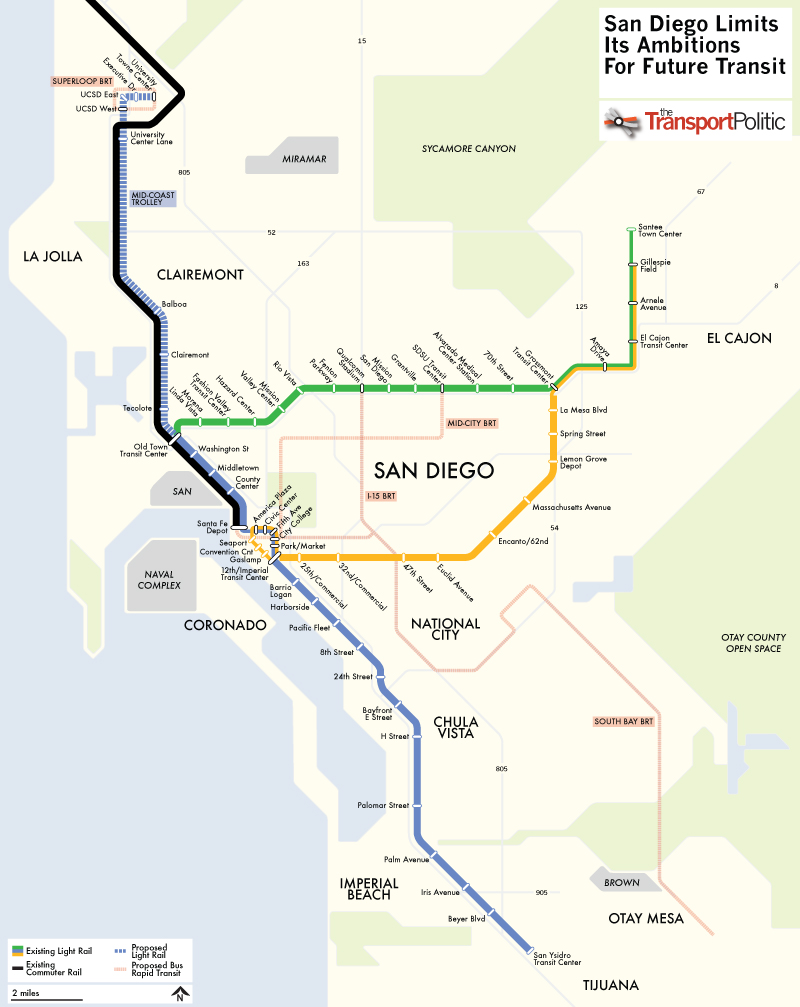 I suspect the plan reflects the influence of the locally based Alan Hoffman, an energetic and informed advocate of the Brisbane model of Bus Rapid Transit (BRT), a model I’ve discussed at length here.  (Hoffman was a key author on a readable 2008 survey of BRT around the developed world, downloadable here, that endorses the Brisbane model for North American cities, including San Diego.)  Brisbane features largely grade-separated busways capable of very high freqeuncy and reliability but also capable of running buses through to many destinations at the outer end of each corridor.  The Brisbane model works well where you have (a) a reasonably dense corridor, extending outward from downtown, where (b) a separated busway is physically feasible but where (c) there is no single overwhelmingly important transit destination at the corridor’s outer end.

By that principle, the San Diego plan looks right to me.  Light rail is to focus on extending to the biggest transit destination in the county outside of downtown, UCSD, and ending there.  A link from downtown to UCSD will have balanced, two-way demand flows all the way to the end of the line, a very good geography for rail transit with its fixed high capacity and attendant fixed infrastructure cost.

But corridors that don’t have a strong outer endpoint will benefit from a pattern in which high frequency runs along the corridor but can branch in several directions as you get further out from the city and demand grows more diffuse.  This is certainly the case with the I-15 and South Bay corridors as sketched.

The Mid-City corridor along Park and El Cajon Blvds., which focuses mostly on inner-city fabric, is more debatable.  It does have a strong outer endpoint, San Diego State University; it also serves San Diego’s great central park, Balboa Park, and the famous San Diego Zoo.  It probably could be light rail, or even some form of streetcar, so bus-based solutions should probably plan for convertibility to rail in the future, as capacity needs dictate.  Note, too, that what’s proposed for Mid-City is “low-end BRT,” similar to the Los Angeles Metro Rapid, where signal priority is the primary means of giving buses an advantage. It’s hard to create exclusive lanes on inner-city streets, especially in the early stages of network development, but Rapid Bus service can be a sensible step in that direction.  By doing what can be done to increase patronage without exclusive lanes, it helps build the argument for exclusive lanes in the future, much as it is has done on Wilshire Boulevard in Los Angeles.

There may be, as the Transport Politic suggests, some bias against spending too much money in the dense inner city, and/or against short corridors, in the region’s planning politics; some such bias is inevitable in large urban regions where the inner city is a small part of the political picture.  It will be intersting to watch Mid City plans evolve in more detail.  This corridor is already dense, but also likely to see further urban redevelopment, much like the Pearl District in Portland.  If such development can be harmonized with locally oriented Bus Rapid Transit — doing what a streetcar does but on tires, and a bit faster and more reliably — it will be an important data point for similar inner cities across North America.

You are here: Home › San Diego: The Rail-Bus Balance