As cycling becomes more and more popular, how should transit planning respond?  I’ve suggested before that better integration of cycling can be crucial to expanding the reach of rapid transit, and possibly eliminating some of the need for less efficient local-stop transit.  That post also attracted great comments from experienced bike+transit riders hammering out the details.

But the details of whether and how much this can work vary a lot from one city to another.

Adam Parast of the University of Washington — one of the voices behind the excellent Seattle Transit Blog — recently completed a Portland and Seattle Cycle Analysis.  It compares the cycling potential of these two rather perfectly different cities: 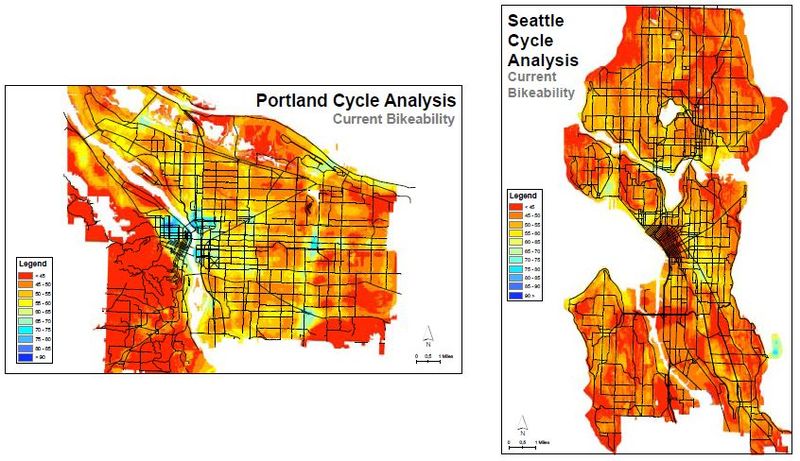 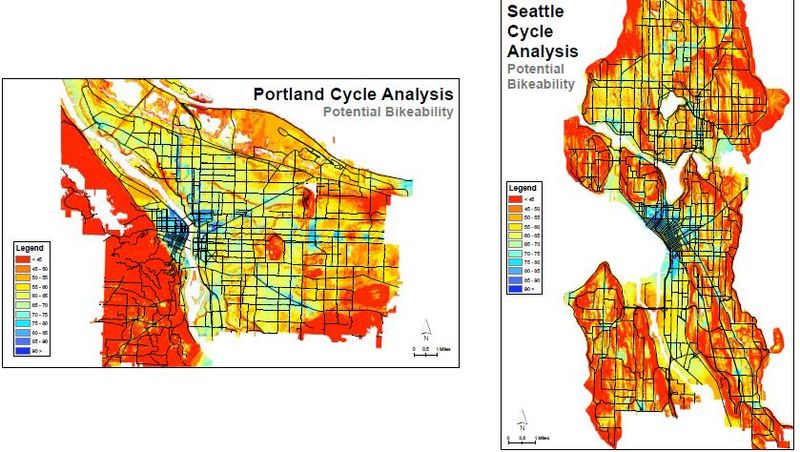 Portland is a valley, and the dense or densifiable parts of the city are mostly flat or gently sloping.  The westernmost part of the city has ferocious hills, but also a much lower density.  The contiguous bike-friendly area of Portland has the vast majority of the city’s population and activity; I think that’s a key to Portland’s cycling growth and potential.  Portland’s geography is much like that of the European cities that it admires, which are mostly either dead-flat like the Dutch cities or built on gentle valley floors, like Freiburg.  It’s easy to imagine that an aggressive bicycle infrastructure program could continue to drive Portland’s cycling to a point where many people would find they could meet most of the needs of life on a bike, without ever confronting a really steep hill.

Seattle, by contrast, is a city of obstacles, a labyrinth of hills and water barriers.  This makes the city rich in chokepoints where it’s relatively easy to give transit, and bikes, an advantage.  Adam describes this a different way: Seattle, to a cyclist, will always be a series of islands, an archipelago.

Adam could have made this same comparison between mostly-flat Los Angeles and the much more geographically challenged San Francisco Bay Area, or between dead-flat Melbourne and Sydney’s undulating landscape of promontories and ravines.  But Seattle really is exceptional, on a global scale, for the density and severity of obstacles that lacerate every part of the city.  As I observed before, nowhere in Seattle can you go more than a few miles in a straight line without plunging into the water or over a cliff. Even the heart of downtown is on a serious slope, such that people often use building elevators to get from 2nd Avenue to 3rd Avenue.  From a transport perspective, it’s a ridiculous place to build a city.  But of course, this fine-grained obstructedness is inseparable from what makes Seattle a spectacular and exciting place.

The image of Seattle as an archipelago suggests that it will need a lot of “boats.”  On each “island” pedestrians and cyclists will be able to get around locally without much trouble, but getting from one island to another will be a challenge.  Is it possible to design bike boulevards that will connect all of the islands?  Some effective boulevards already exist, crossing water barriers where the topography is gentle, such as the link north from downtown across the Fremont Bridge.  But many desire lines face huge topography barriers.  It’s hard to envision any infrastructure that will make an average cyclist want to ride from downtown to the fortress-like hilltops of West Seattle — let alone that archetype of Dutch cycling, a 60-year-old woman with two bags of groceries.

So archipelago cities who want to invest deeply in cycling — and who want cycling to penetrate the culture beyond the young and athletic — are going to need some links between these islands.  Perhaps we should be thinking about rapid transit more specifically in those terms.  Perhaps this means that highly obstructed “crossings,” such as downtown to West Seattle, should have rapid transit options where you can take your bike on board.  Sound Transit’s new Link light rail line is one such, and it usefully connects downtown to the bikeable “islands” of the Rainer Valley and Tukwila.  But elsewhere, Seattle has buses, and the standard bus generally has limited provision for bikes.

I wonder, in short, if Seattle’s very pro-transit mayor should be thinking along lines that would bring cyclist and active-modes interest to the transit agenda.  Light rail is certainly one product that usually allows bikes on board, but does it have to be light rail?  Should Seattle be designing a rapid bus product that integrates with bikes more effectively?  Do we have to focus on taking bikes on board, or can the same need be met by bike hire stations in each “island”?   It’s an interesting problem, maybe an important one, and not just in Seattle.

21 Responses to Should We Plan Transit for “Bikeability”?

You are here: Home › Should We Plan Transit for “Bikeability”?