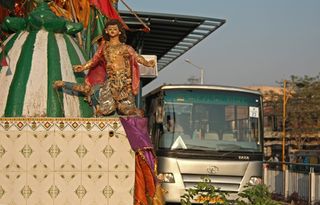 An excellent article by Meena Kadri at the Design Observer Group offers a tour of the new Bus Rapid Transit (BRT) system in Ahmedabad, India.  While North Americans argue about whether Bus Rapid Transit can substitute for rail, the developing world is building a lot of both.  India, though, made an early commitment to BRT for its second-tier cities and corridors.

Indian public policy is always intensely focused on the country’s issues of poverty and economic opportunity.  So many people need improved mobility that the government is strongly encouraged to choose whatever tool will create the most urban mobility for the least cost.  So while a rail transit program is underway for the busiest corridors in the biggest cities — where capacity needs require it — a massive investment is being made in Bus Rapid Transit.

What’s most encouraging is that they’re taking the speed and reliability needs seriously.  An early project in Pune was too compromised, as often occurs when you try to take away street capacity for a project that nobody understands yet.  Pune’s facility was only partially exclusive, so the ferocious scouring force of Indian traffic ultimately carried the day and defeated much of the project’s purpose. 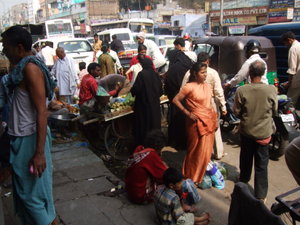 I worked for a bit on a BRT project in Visakhapatnam in 2008, and it raised fascinating issues.  When we first toured the proposed corridor, our first reaction was “Whoa, this is way too narrow!  Where are you going to put BRT here?”  Lined with street vendors, as many Indian boulevards are, the street seemed to have only space for four narrow lanes of traffic.  (“Lane,” of course, is an abstract concept in India, where vehicles vary dramatically in width and thus find different sorts of lanelike spaces to suit their need.)  But our guides pointed out a wall of permanent buildings lying well behind the vendors.  That, they explained, is the edge of the street right of way.  All the street vendors are engaged in “encroachment.”  The word may sound bureaucratic but it nicely captures the barnacle-like gradualness and persistence with which life will press into any available space.  The edge of the Indian street is a dynamic negotiation between the needs of transport and the needs of commerce.  Pedestrians, of course, must walk along the battle-line of this enduring conflict.

So one thing the BRT program was going to do is sweep all these merchants out of the way and restore the original width of the street.  (The merchants would be looked after, however; considerable budgets are set aside to manage “social impacts” from capital projects.)  But then we had to consider how the entire street could operate with BRT down the middle.  How would we manage access?  Would pedestrians flow across the boulevard at random, or would we try — against all the natural forces of the Indian street — to force them to use signalised crosswaks?

We also had to decide on raised platforms, with high-floored buses, or low platforms with low-floor buses.  I’ve always preferred the latter, because they can run through onto non-busway segments and because a high-floored bus is hard to evacuate if you have an emergency away from a station.  But South American experts have enthusiastically pushed the high-floor option.  It’s cheaper, and this really matters in India.  It also implies high-floor stations that are a bit more visually prominent and thus a little less vulnerable to commercial “encroachment.” 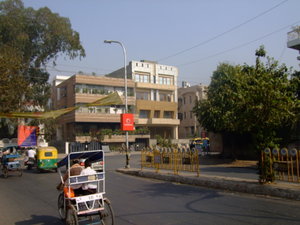 If you share the North American activist view that BRT is just a front for people who want to build more roads, a Indian BRT project will probably push that button.  It was clear, for example, that while city leaders were still not sold on BRT — it was funded and promoted by central government — they really liked the idea of reclaiming the full width of their street.  This would create room for BRT plus two lanes of traffic, and would also create space for a “slow vehicle lane” for low-speed one-gear bicycles and human powered rickshaws.  Safety, of course, was the rallying cry.  Indian streets can be really dangerous, especially for exposed humans, so we faced the usual irony: A street that separated pedestrians from cars would definitely improve the safety of pedestrians and other pedestrian-speed traffic, even though it would mean the cars would be able to drive faster.  The cruel fact of life is that pedestrians are a form of traffic calming.  Motorists really try hard not to hit them, and this keeps them from driving as fast as they otherwise would. 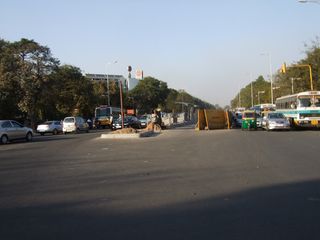 One of the most interesting challenges was encouraging our Indian clients not to buy too much technology.  Indians are usually good at figuring out the cheapest way to do things, but like almost everyone they do like technology for its own sake.  I tried at one point to talk them out of buying automatic ticket machines.  Labor is so cheap that every bus has a conductor as well as a driver, so there’s just no need for them.

Indian BRT is an interesting example of a point that I’ve often raised in bus-rail discussions.  Why exactly should we spend more on a nicer, more comfortable technology when we can provide the same mobility with a cheaper one — and thus extend the product further, into more territory, serving more people?  North American readers often resist the obvious point that a cheaper unit cost means you can build a larger network, partly because they doubt that cost savings would really be spent that way. 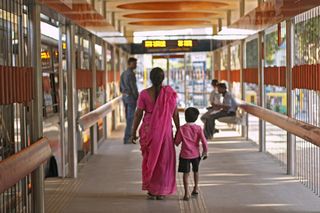 In India it’s much clearer.  You have a billion people and not much money.  So build big, extensive networks, by choosing the lowest-cost product that meets your standards for civilized space.  The Ahmedabad BRT does have new buses — not fancy but functional, with the same next-stop information (visual and announced) that you’d expect in Europe.  The BRT lane seems to be sufficiently protected from disruption.  But it’s still cheap, and that means it can take you further than a more expensive technology would do.  Yes, BRT has much worse emissions than rail, and eventually some sort of carbon trading system will make that problem bite.  But right now, Indian planners are looking at the advent of the new Tata Nano, a $2000 car designed to be affordable to the poorer families who currently get around, dangerously, on motorbikes.  The cities don’t have room for all those cars.  So there’s some urgency to getting good transit built in India, and on that score their priorities make sense.

Should We Redesign Our Bus Network? How?
Transit and the Hierarchy of Needs

28 Responses to Bus Rapid Transit in India: An Upbeat View

You are here: Home › Bus Rapid Transit in India: An Upbeat View