This just had to happen:  Portland’s TriMet has removed eight parking spaces from the Park-and-Ride at its Sunset Transit Center light rail station, and replaced them with secure space for 74 bikes.  From the Oregonian coverage:

Look at it this way: There are now 74 parking spaces where there was [sic] once just eight — as long as you’re riding a bike to link up with light rail or a bus.

“That’s potentially 74 cars that won’t be using the park and ride,” said Rob Sadowsky, executive director of the Portland-based Bicycle Transportation Alliance. “It’s 74 people who aren’t in traffic, who aren’t putting carbon into the atmosphere, and who are exercising.”

Sunset Transit Center (“Sunset TC” on this map) has always been a strategic location for access to the Blue and Red light rail lines.  It’s the first station beyond the major barrier of the West Hills, so for areas to the west it’s the only place to go for a fast light rail trip into the city.  The light rail line also turns south at this point, so the entire area north and west of it needs to feed to this station, by bus, car, and bike. 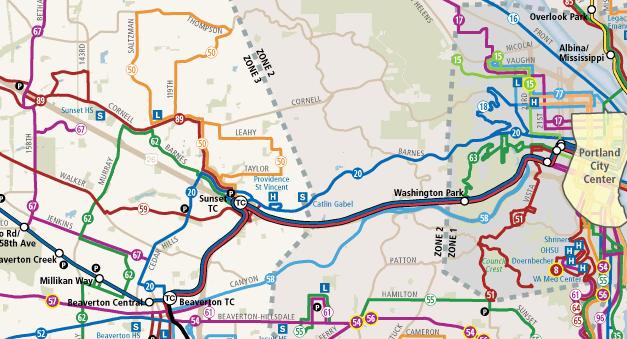 Because of this strategic geographic position, this station will always be one of TriMet’s busiest for access by all those modes.

People who park there are currently paying in time and inconvenience rather than money.  The parking often fills up, leaving angry motorists looking for a space.

But Lisa McAdams of Hillsboro said losing parking spaces to a bike and ride isn’t fair to people trying to take public transit instead of driving into Portland. “I’m sure a lot of people are ticked,” she said.

After five minutes of searching inside the Sunset garage Thursday afternoon, McAdams was about to give up and drive her Honda CR-V downtown when someone backed out of a space.

Yes, Lisa, you’ll often be circling the garage as long as the parking there is cheap or free.  It’s that old law of supply and demand.  Meanwhile, you have eight fewer chances to park, but there are 74 more chances for human beings to get on light rail, and get where they’re going.  Looks like an easy call.