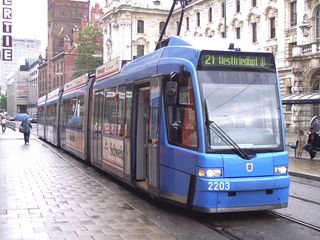 My tour of Germany, France, and the Netherlands in July brought me to numerous situations where trams are used to great effect in handling high volumes of passengers moving in exclusive rights-of-way.  (I cannot emphasize too often that these are usually more like light rail than like US streetcars or Australian trams, which are often compromised by having to share a traffic lane.)

I spoke to many transit experts on the trip, and only in Munich did I hear a planner state the view that it may make sense to convert buses into trams solely because trams can attract more riders.  (Note that Prof. Patrick Condon also wants to replace buses with trams, but he’s thinking about a development and urbanist outcome.  He’s also arguing, as my Munich contact would not, that it may be good for transit to be slower.)  This planner recently wrote to me to share the following data, showing that German cities with trams have higher per capita ridership than cities that run only with buses.  It’s too big to copy here, but it’s a simple Word file:

The result is, that cities with a tram system have in average 50% more passengers in the total system (tram and bus) than cities with a bus only system.

Cities like Wiesbaden with an extensive bus lane system are among them.

OK.  But if you’re going to throw these kind of data around as though they’re decisive, please remember:

Correlation is not causation, nor does it tell you which way causation goes.

In this case, the correlation may be more easily explained by a causation that goes the other way, i.e. that ridership is “causing” trams.  The best reason to convert a bus to a tram, or to build trams instead of a bus line, is because you need a higher capacity — in riders / driver — than you can handle on buses. It’s perfectly logical that high-demand corridors have trams rather than buses, but that doesn’t mean the trams caused the ridership.  It may be the opposite or a complex mix.

66 Responses to Munich: Do Trams Cause Ridership? Vice Versa?

You are here: Home › Munich: Do Trams Cause Ridership? Vice Versa?