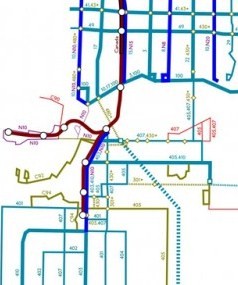 Inspired by my post on the urgent need for frequency mapping, Vancouver’s transit agency TransLink, via its blog The Buzzer, has been encouraging map enthusiasts to draw their own ideas for what a frequency-coded map might look like.

The most nuanced so far is this one by David M.  He’s sketched a bit of southern Vancouver and Richmond as an example.   Look at the original and note all the distinctions he’s tried to draw.

The most interesting idea to me:  He uses width to capture the three frequency/span categories I suggest (frequent, infrequent, and peak-only) but then he uses dashed lines (at these various widths) to indicate a nonstop segment.  I’m not sure whether I like that or not; I find it a little hard to follow a line that turns dashed and then solid again, but I might get used to it.

He has an interesting idea for colors, too.  The colors generally represent the same distinctions as line-widths, but with some additional nuance.  It would also be possible, of course, to use linewidth for frequency and then the full gamut of colors to distinguish lines.  This is what the old (early 00s) map at Portland’s Tri-Met did: 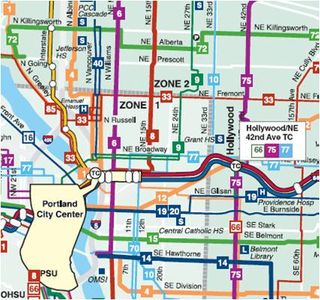 A little busy, maybe.  A scheme with fewer colors, using the colors to mean more than just different routes, seems to be cleaner.  What do you think?

Notes on a Cruise
Munich: Do Trams Cause Ridership? Vice Versa?

You are here: Home › Frequent Network Maps: Ideas from Vancouver