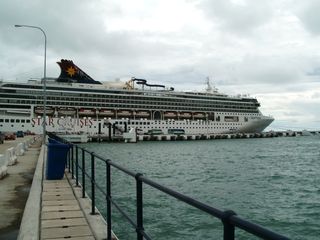 I am so not the kind of person who goes on cruises, with all respect to those who are.  A solo explorer by temperament, I hate being herded, hate being rushed, and hate having strangers trying to guess my desires.  I also hate not knowing where I am, and have pushed my Blackberry’s feeble GPS to the limit trying know which country I’m in or which island I’m looking at.  And don’t get me started about shopping.

But when I was asked by one of Australia’s leading bus operating companies to join their scheduling and operations staff on a short cruise out of Singapore to Phuket and Langkawi, I figured, hey, I’ll do it once.  The offer was: we’ll pay your fare, you just have to give two inspiring talks to our crew during the cruise.  Initially puzzled by the idea, I finally began to appreciate the wisdom of it.  I’m sure cruising vacationers reach a tipping point where they’ve lounged in so many chairs, sung so much karaoke, and bought so many silk shirts and drinking coconuts from the shipside stalls that they start thinking:  “If I don’t get some PowerPoint soon, I’ll go mad!”

It’s gone well, thanks in part to timely advice from HT readers.  At the moment I’m in a restaurant near the pier at Langkawi, looking out over the water, watching tall, thin, dramatic islands loom and vanish and loom again in the fog and driving rain.  So of course I’m thinking about transit.

If you are the cruising type, and are shopping for a cruise, remember to ask:  Where at each place will we stop?  Sydney, for example, has been having conversations about cruise terminals.  There’s one right at Circular Quay, the centroid of tourist Sydney, but there are also plans for one at White Bay, an industrial area where you’ll see the downtown Skyline and the intriguing Pyrmont and Balmain peninsulas, but won’t be able to walk to anything except a freeway.  So it will be much like the cruise experience at Phuket and Langkawi:  The cruise delivers you to a forlorn peninsular dock (Phuket’s is here, Langkawi’s here), each on the southern tip of the island, far beyond walking distance to anything at all, where your welcoming committee is a horde of taxi drivers all ready to tell you that the 5 km trip into town is really 20 km and will cost at least $50.  There will also be tourbuses, of course, but nothing that looks like public transit.

To a degree this makes sense.  Cruise ships need deep water right next to land, which means that the undersea slope is very steep.  You’re most likely to find this where the land above the water is steep too, and towns and cities rarely get started on steep slopes.  So it’s logical not to count on the cruise ship terminal being in the center of town, though some places, like Sydney’s Circular Quay, are lucky in this regard.

As for local transit to remote cruise ship terminals, the problem, of course, is peaking.  I remember dealing with this when doing a bus network study in Juneau, Alaska, a tiny town that takes up to five enormous cruise ships, each of which feels larger than the town itself.  It’s like having a large city just down the road that periodically appears and disappears.  Juneau’s public bus system doesn’t add any services when the cruise ships are there, and doesn’t try to serve the tourists on them.  I could imagine being on a ship, though, and wanting something cheaper and more authentic than the big buses that will deliver you in hordes, for a high fare, to the key tourist sites.

One could invent a much more logical transit system around cruise terminals, one that would exist only when the boats are there and probably run with local taxi vans.  It could work like demand-response van shuttles, offering to take you anywhere in a general area.  It would be more efficient, especially in terms of emissions and congestion, but of course it wouldn’t feed as many taxi drivers.  It would be ideal for unherdable solo explorers like me.  Not that there are many of us on a cruise.

Dissent of the Week
Frequent Network Maps: Ideas from Vancouver

22 Responses to Notes on a Cruise

You are here: Home › Notes on a Cruise