In his guest post, Aaron Priven explained the design process that he led for the distinctive AC Transit network map in 2003.  Here are some pieces of that map.  (For the whole thing in its most recent version, see here for PDF, or here in a version that you can pan and zoom online.) 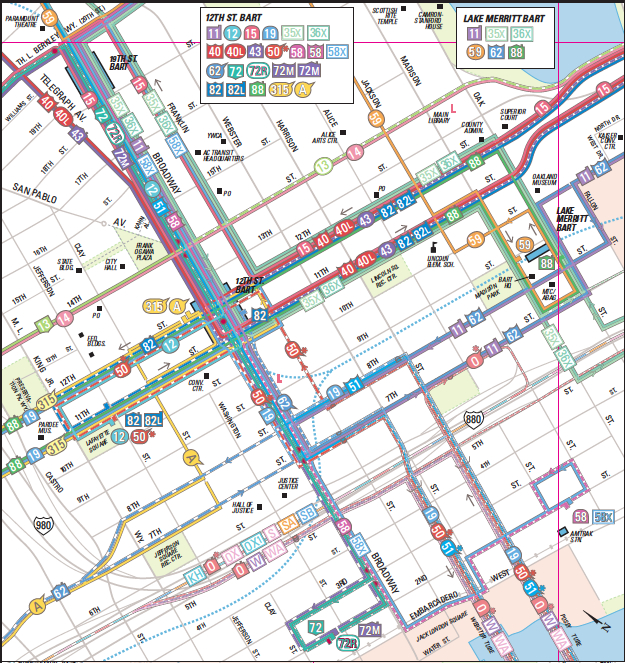 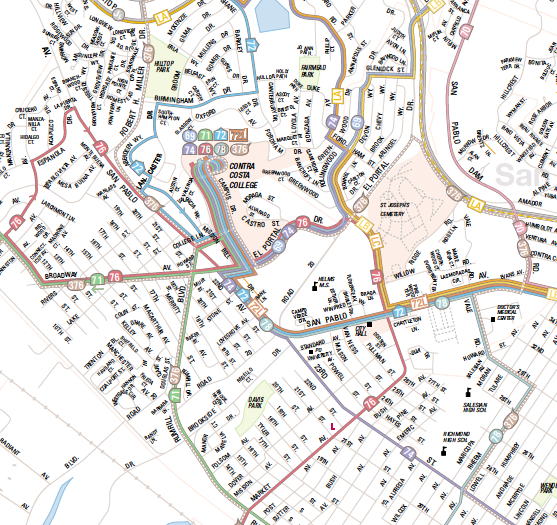 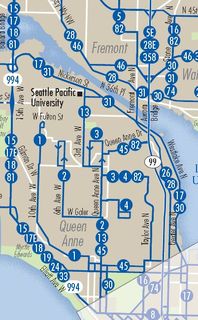 One basic principle we wanted to follow was that there should be a one-to-one correspondence between the ink lines and the bus lines. Many American maps are like the Seattle map [pictured here] where no matter how many bus lines are on a street, they are shown by a single ink line. Trying to understand where a single line goes is very difficult on these maps. One has to hunt around for the bubbles to figure out where the route is going, and sometimes this can be very obscure.

For example …  there is a Line 30 bubble on Dexter Ave N., and another one further west, on an unlabeled street near Queen Anne Ave. N. How does Line 30 get between the two places? Does it dip downtown and come back in a U, or does it travel on one of the two sets of east-west streets shown? Or does it do something else entirely?

No argument there.  But here’s the AC Transit map’s legend: 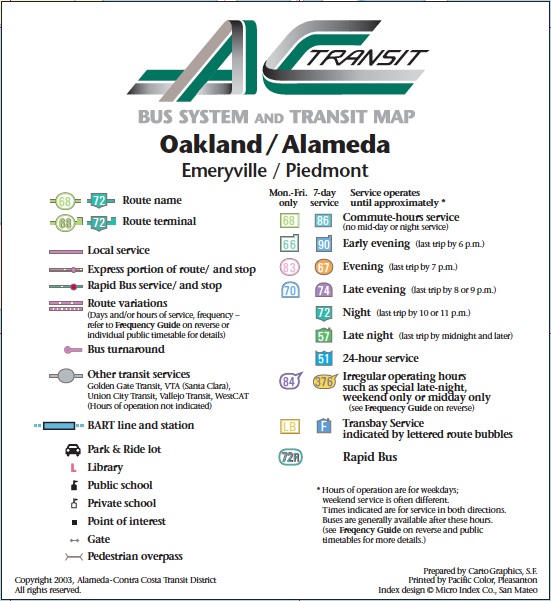 Then, to help distinguish between levels of service, they use a range of different kinds of “bubble” symbols.  But they are focused on explaining span — when service starts and ends — rather than frequency.  Is that the right priority?  Consider this:  If you tallied every person who looked at this map to figure out a particular route, what percentage do you think care that the last trip of the day is midnight or later?  Now, what percentage do you think care if there’s service on the line in the next half-hour?

Frequency usually tracks with span:  Lines that have the longest span are usually major lines in other respects, such as frequency.  But as Aaron notes, that’s not always the case, and the AC Transit system is particularly full of complexity.  So the design of this map really comes down to a choice:  Are we trying to accurately portray the complexity of the system or are we trying to help people see, amid this complexity, the portion of the network that they’re likely to find useful?

I disagree.  Emphasizing complexity conveys the message that the service takes a lot of work to figure out, so it tends to encourage people to consider transit only for one or two trips that they’ve learned how to make.  In fact, despite all the complexity on this map, a large share of the agency’s service, and ridership, is on a few major lines.  On these lines, the next bus is always coming soon; if you want to travel anywhere on those major lines — which together serve most of the major destinations and a lot of the residential density — the system that you need is really simple.

On the AC Transit map that simplicity is largely concealed.  The map forces everyone to wade through the complexity, even if the information they need is simple.  Even though a large share of customers, perhaps even a majority, are after fairly simple information: Which of these lines is likely to be there when I need it?  Span (when the service runs) is an important part of that, but the distinction between 10 minute frequency and 60 minute frequency affects a lot more people.  The one span category that I do recommend highlighting is peak-only, because peak-only routes exist for such a short period that showing them prominently on the map makes it harder to see the all-day structure, which is the network you’ll need to care about if you’re going to rely on transit for a range of trips.

You are here: Home › Do Complex Networks Require Complex Maps?