Why are pedestrian streets in commercial areas so common and successful in Europe, but not in North America?

A while back, a reader emailed me to ask this.  He observed that even in Vancouver, it’s hard to get a pedestrian mall going:

And why does a downtown core as densely populated as Vancouver only have one temporary pedestrian area (part of Granville Street)? And could Vancouver make the main shopping street (Robson Street) a pedestrian corridor like many UK towns and cities do (such as Birmingham, Glasgow, Reading, Bournemouth, and many more)?

I note you commented on Price Tags about Granville Mall earlier this year, and Price Tags has a recent article on the removal of a pedestrian area in Raleigh, North Carolina. Have you any further thoughts on these issues?

In Australia, pedestrian malls are utterly routine.  I can’t think of a major commercial center in any of Australia’s major cities that doesn’t have one or more pedestrian malls at its core, usually immediately adjacent to the rail transit station.  Even small cities in Australia — 50,000 or smaller — often have at least one small ped mall running perpendicular to the main traffic street, or what Aussies would call the “high street”.  Many small suburban centers have their own.

Here’s a random example that I happened to visit while thinking about the question.  It’s the Lyneham commercial district in Canberra.  In Canberra’s planning hierarchy, this is a third-order center, designed mostly to serve only its own local population of a few thousand people in a radius of under 2 km.  Lyneham does have a couple of cool businesses that draw from further away, notable Tilley’s Restaurant and an adjacent cafe+gallery, the Front, that offers free Wi-fi (not yet routine in Australia).  But neither of these is on the pedestrian mall itself.

The mall is a short segment running from the main street to the parking lot behind, where the main grocery store is located.  The mall itself is lined with absolutely ordinary small businesses: a chemist (pharmacy), a newsagent, a bakery, a butcher, a little cafe. 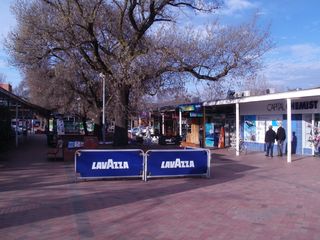 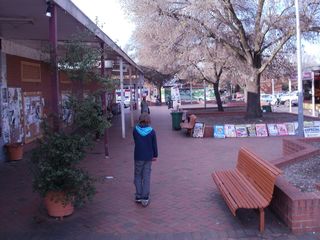 One side of the mall is a blank wall of the larger IGA grocery store, but that store’s entrance is on the corner of the building in the distance, visible from both the parking lot behind the building and the pedestrian mall itself.  Australian planning almost never allows a grocery store to front onto a main street.  Instead, it’s on the parking lot behind the commercial centre, typically with a pedestrian mall like this one linking it to the street itself, so that it’s large drawing power helps to animate the mall and nurture the small business on it.  The grocery store’s logo will usually be visible from the street, perhaps on the back or side of the building, but that’s it.  Who needs the main grocery store to have a big sign on the main street?  Everyone knows where their grocery store is.

You may also notice that the shops on this mall mostly offer things that Americans expect to find in the grocery store itself: newspapers and magazines, a pharmacy, and a staffed butcher and bakery counter.  Larger grocery stores do include staffed meat counters, but they’re usually still surrounded by separate shops offering the same thing.  Aussies like turning their shopping into a series of separate transactions with human beings.  They assume that they are getting better value, and especially better quality, from small merchants, whether it’s a butcher, a baker, a fishmonger, or a specialist in fresh fruits and vegetables.

The newsagent is perhaps the most culturally alien feature of this street to North Americans.  There are no newspaper vending machines in Australia.  Everyone buys a newspaper from a newsagent, who also has magazines, snacks, stationery, and assorted goodies like bus tickets.  (There’s the connection I needed!  Now I can discuss all this on a transit blog!)

If you’re from North America, and haven’t been to Australia, you won’t believe how completely ordinary these little malls are.  Everyone expects to encounter one in a business district.  Because these are ordinary, larger ones in larger centers become ordinary too.  In the CBD of Canberra (metro area population about 400,000), there’s a multi-block pedestrian quarter which includes one side of the main shopping mall.  Larger cities inevitably have larger and more elaborate ones, but the important thing about Australia is how utterly normal and widespread these small pedestrian malls are.

If there’s an underlying cultural difference to explain this, it’s probably that Australia never had a moment when (a) there were massive amounts of money and (b) building everything for cars seemed like the logical thing to do.  The US did have such a period, from 1945 until it started changing in  he 70s.  To use Jane Jacobs’s terms, Australia experienced “gradual money” in the postwar years, but it never had the “cataclysmic money” that  enabled the US to transform itself suddenly into a car-dominated landscape.

Aussies love cars too, but they have continued to build incrementally on their older towns.  They’ve built plenty of suburban sprawl, but they almost never tried to retrofit old town centers to serve only cars.  Aussies also have planning habits that derive from the Garden City era of planning, roughly 1880-1920, because this is when much of Australia’s old urban fabric was built.

(By the way, two of the most important dates in Australian history are in this same period.  Australia was created as a nation with the act of Federation in 1901, and the nation’s major holiday honoring military service is Anzac Day, which commemorates a battle in 1915.  Australia’s sense of itself is rooted particularly in the Garden City period, which may be an ancillary reason that this period’s planning values still rule.)

It’s true that if you ask either Americans or Aussies where they would ideally want to live, you’ll often hear “a small town.”  In fact, Aussies and Americans both live in big cities because the economy requires it.  The ped mall can be an element of forming a sense of small town in a big city neighborhood, but that’s more likely to work for Aussies because their memory of small towns is more vivid than that of Americans.  This, of course, is both a cause and an effect of the fact that they haven’t destroyed them all.

Ultimately, Australia’s success lies in the fact that the transition from towns to cities was gradual, so  there wasn’t as much forgetting as there was in North America.  Australian planners aren’t necessarily more creative than North American ones.  But they do remember what a real town looks like, because such places are still all around them.  They probably shop in one themselves.

Comment of the Week: The Frequent Network Mapping Campaign
Navigation: “Turn Right at the Yellow Shop”?

35 Responses to On Pedestrian Malls: Look to Australia

You are here: Home › On Pedestrian Malls: Look to Australia