The remarkable busway network of Almere, Netherlands is impressive from the ground, as we saw in Richard Lenthall’s post, but it’s even more remarkable on Google Earth: 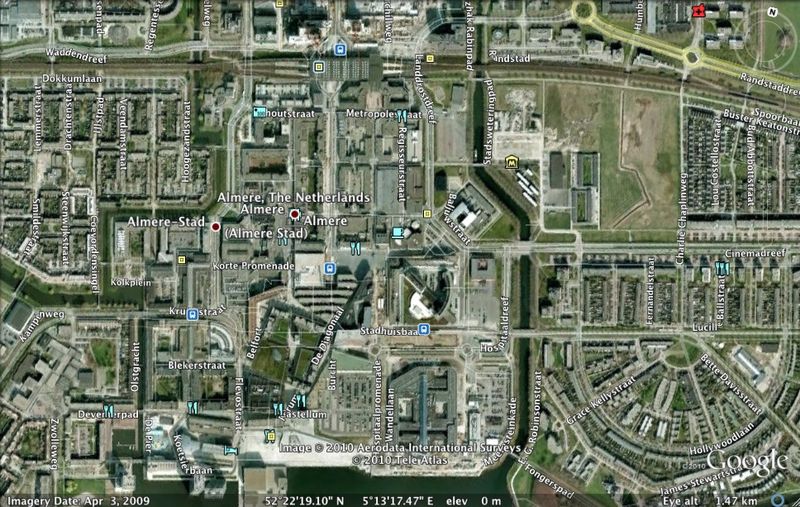 Here is the commercial core of Almere.  (You can easily find this yourself on Google Earth or Google Maps.  Just search for “Almere, FL, NL.”)

The entire image is a mile (1.6 km) wide.  Across the top of the image you can see the main intercity rail line, running east-west, with frequent electric trains to Amsterdam, Schiphol Airport (AMS) and other major towns of the country.  The station is right in the middle.

Directly south of the station is the densest part of the core, on a short axis extending south from the station to the main lake, just visible on the south edge of the image.  As you can see, a busway runs right down the middle, going underground at the station and again at the major commercial/employment center on the lake.

Directly east of the commercial/employment center is a distinctive district with a half-circle pattern of streets.  The northern edge of the half-circle is an east-west busway.  It goes right under the commercial center and emerges on the other (west) side.  Some bus routes run east-west across this segment, but most come from the two sides and turn northward to run under the station.

Let’s pan southeastward a bit, at the same scale: 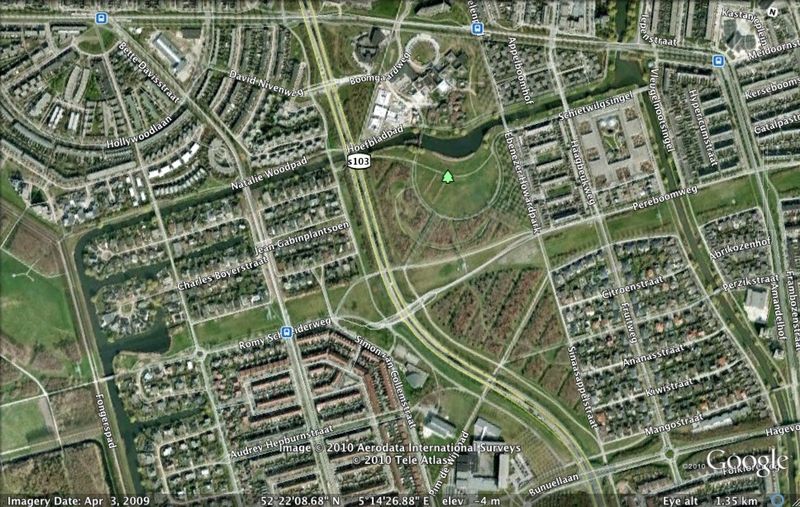 The half-circle district is now in the northwest corner, where this image overlaps the previous one.  The busway branches right at the center of the half-circle.  One branch heads south, while the other continues east and then turns south near the east edge of the image.  The little Google bus stop symbols indicate the busway path, but note that not all of the bus stops appear at this scale.

As you can see, the busway is reasonably central to all of the development, because both were designed together.  At the points furthest from the busway, you have open space and a high-capacity road.  The busway brings you to central points of the community, while the road network delivers you only to the edges of it.  You can see the same pattern in the commercial core above: high-capacity roads form a ring around the core, delivering you to parking on these outer edges.  But if you come by bus, you arrive at a core location where there’s very little traffic, where the walking distances to everything are optimal, and where all the infrastructure welcomes you as a pedestrian.

North Americans try hard to do “transit-oriented development” (TOD), but the Dutch are doing it on a massive scale.  Even more heretically, they do it with buses!  All of Almere is transit-oriented, and the transit is all in the form of busways.  These aren’t the long-haul rapid-transit busways of Brisbane, though the Dutch do those too.  Almere’s busways are designed to be the local coverage for the entire town; there’s no need for additional meandering local buses getting stuck in traffic on local streets, or slowing down for the traffic-calming measures aimed at cars, such as you see all the time in North American and Australian suburbs.

Just because service is locally oriented doesn’t mean it shouldn’t be as fast and reliable as possible.  Remember: average speed determines a route’s cycle time, which (combined with frequency) determines operating cost.  A service that’s faster and more reliable requires fewer buses to cycle, so it can be run more frequently at the same cost.

The Almere busway moves at moderate speeds and stops relatively often, but still the stop spacing has been placed as wide as possible (rarely less than 500m) and the urban form works with that spacing.  The busway intersects minor streets, but it’s grade separated where it crosses a major highway (such as the top-center of the second image).  Buses are able to cycle the whole system with near-perfect reliabiilty.  The only source of delay is a problem with passengers boarding and alighting.

The urban structure here is repeated all over the residential parts of Almere.  Explore it yourself.  Yes, you could have done this whole structure with streetcars on grass track, but for a variety of reasons, probably partly due to the ease of phasing service in, they chose to do busways instead.  You can argue over the environmental and sustainability issues of that choice.

But don’t let anyone tell you that you can’t build a dense and transit-oriented suburb using buses!  As always, what matters is not the technology but the mobility it’s designed to provide.  That’s a matter of walking distance, separation from car impacts, stop spacing, and exclusive right-of-way.  Optimize all of these, as Almere has done, and you’ve got an almost perfect transit system, properly located to form the primary circulation system for the community.

You are here: Home › Almere, Netherlands as Bus-Oriented Development