Richard Lenthall is the founder of Sight of the Navigator, a European travel and transit advisory website based in Amsterdam. It aims to improve tomorrow’s journey experience by bringing together transit providers and their passengers.

Transit and urban planners will no doubt be familiar with the “Bus Lane”, the concept of designating a lane or segment of road exclusively for the use of buses and other permitted vehicles.  When properly executed bus lanes can save time over the same section of a journey made with a car, and provide operators the means to keep to timetables during the rush hours, both of which can promote the use of public transit.

Due to constraints in most established and developed urban areas, the bus lane is something of a compromise.  The weakness of a bus lane, and where the efficiency gain is most often compromised, is at intersections with other major road arteries where the priority for the bus cannot be continued.  At these points the bus often has to compete to rejoin the normal flow of traffic and then queue normally on an equal footing.  Compounding this weakness are features of more poorly planned bus lanes such as temporary operating hours and scenarios where the bus has to either turn against the flow of oncoming traffic, or manoeuvre across the road in preparation for a junction.   (An example of the latter can be seen at Piccadilly, London roughly once every 2 minutes during the day.)  All of these weaknesses counteract the idea of giving the bus priority.  Journey time starts to suffer, where properly separated transit would be able to continue unhindered.

In an ideal world the bus lane would cover the whole of the route, maintain constant separation from other traffic and a priority at intersections, as this would guarantee the value to the user.  Such an ideology is beyond the scope and budget of many developed urban councils as it would imply a complete redesign of an existing road system.

But what if you were able to work from a completely blank canvas? How would it work in reality?  To illustrate this theory I’d like to show you the town of Almere in The Netherlands.

Almere is one of The Netherlands’ famous reclaimed land projects lying on artificial islands, 25km northeast of Amsterdam.  This new land provided urban designers with the opportunity to build both a normal road system and a separated bus-way network that are deeply interwoven throughout the town.  Stepping off the train at Almere Centrum you immediately see signs of how this has been done. 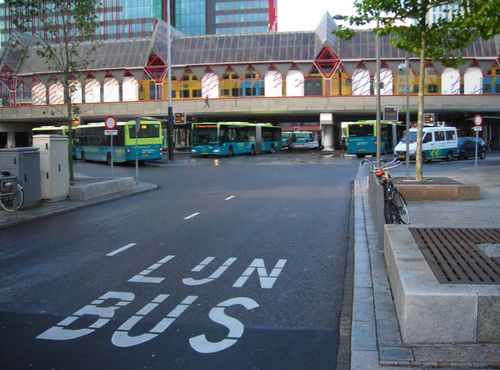 Directly underneath the railway station are bus stops which combine to serve as Almere’s transit hub.  Here buses serve all parts of the town with the trains above going directly to Amsterdam, Utrecht and Schiphol Airport.  While this is a good idea and the result of well thought out planning there is nothing special right here, so let’s turn around. 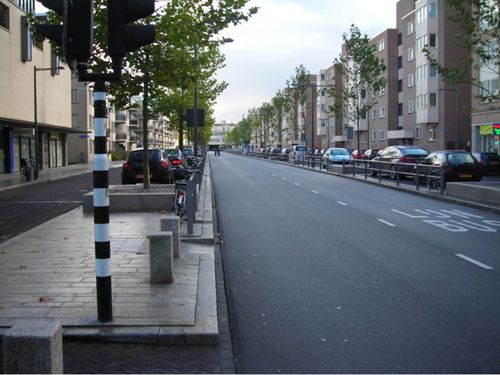 On the busway, car traffic is absent and no bikes are allowed.  Crucially, for the success of the scheme and the efficiency aims, the bus way doesn’t end when it reaches a junction,  Instead the buses are afforded the benefit of pro-active signalling at traffic intersections even if those junctions are very central to the town. 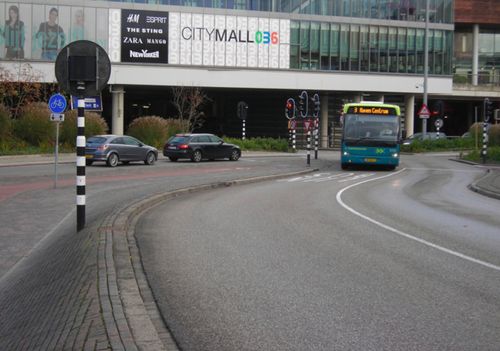 A little further out we can see how the planning of regularly spaced stops at roughly 700m on the bus-way have been incorporated into the social fabric.  The next picture is taken at the Almere Haven stop where housing, shopping, a bar and the bus stop (which also gets services direct to Amsterdam’s business districts) have all been incorporated into the area’s design. 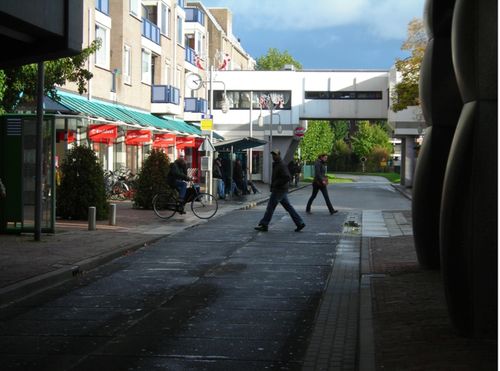 How does it work in practice?

Elsewhere on Human Transit, Jarrett has argued that if you provide a Bus service with grade separation and proactive signalling, which are the usual provisions for Light Rail or Tram networks, buses can operate to the same high degree of efficiency as rail based systems, and in Almere that is exactly what’s been done.

In this video you can watch the bus-way in action.  Taken at a junction, the video shows how the system works when the bus-way crosses an arterial road.  See how the first bus triggers the advanced warning system and the traffic lights controlling the conflicting road traffic turn red before the bus has to slow down.  Once the bus passes the system checks to see if another bus is in the control zone, and then reverts to green.  Shortly after, two red buses arrive and the cycle repeats, this time keeping the road traffic on hold until the second bus has passed through.  None of the buses that passed through had to stop.  Delay to traffic was kept to a minimum and efficiency was optimal for everyone regardless of your choice of transport.

Here you can see how the integrity of the bus way has been preserved despite it running through a busier urban intersection and close to a shopping precinct.

Finally in this video you can see how the bus way performs from the driver’s point of view.  Using magnetic induction loops buried into the bus-way the passing of the bus triggers the advanced warning system.  This checks and changes the traffic signal ahead so that the bus can pass through without having to slow down or stop. (The advanced signal is the white vertical stripe, when it’s lit the bus driver knows the standard traffic light will automatically change in his favour).

In all three videos the buses have exclusive use of the right of way ensuring safety and optimising performance for the service.  The videos demonstrate how capable any bus-way can be if you create a network where buses and other road users don’t compete for access and install a proactive signalling system that ensures priority for the bus.

A Matter of Philosophy

To exploit the opportunity presented by the blank canvas of new land, it must have been important to the urban planners to establish a philosophy for the bus-way and bus services.  This philosophy would have been that they were going to treat the bus not as merely another road vehicle but instead as a means of transport that was going to be afforded clear rights of way, prioritisation and separation as far as absolutely possible.  The consequence of fully pursuing that philosophy is a bus-way network that at first glance operates in a way that’s akin to a tram, metro or even railway network.  The planners of Almere chose not compromise.

24 Responses to Guest Post: Richard Lenthall on the Busways of Almere, Netherlands

You are here: Home › Guest Post: Richard Lenthall on the Busways of Almere, Netherlands