What’s so great about living on a cul-de-sac again?  From the Oregonian:

A fallen tree blocked access to about 50 Lake Oswego homes for more than two hours this morning, authorities said.

The large tree toppled at 8:11 a.m. today, landing across Lakefront Road and McVey Avenue, according to the Lake Oswego Fire Department. It took out power and utility lines with it, causing some homes to lose electricity.

Crews from Portland General Electric had power mostly restored by 10:15 a.m., said the Fire Department’s David Morris. PGE also took care of the tangled power lines on the ground, while firefighters and maintenance personnel worked to clear the downed tree.

People were able to get in and out of the neighborhood again about two hours after the tree fell, Morris said. Crews expected to have the street completely clear by 11 a.m., he said.

(Obvious question to the journalist:  Were the residents really trapped, or was it just their cars that were trapped?)

From the look of it on Google Earth, the good burghers of Lakefront Road seem to have freely chosen their imprisonment.  It’s a very long cul-de-sac. 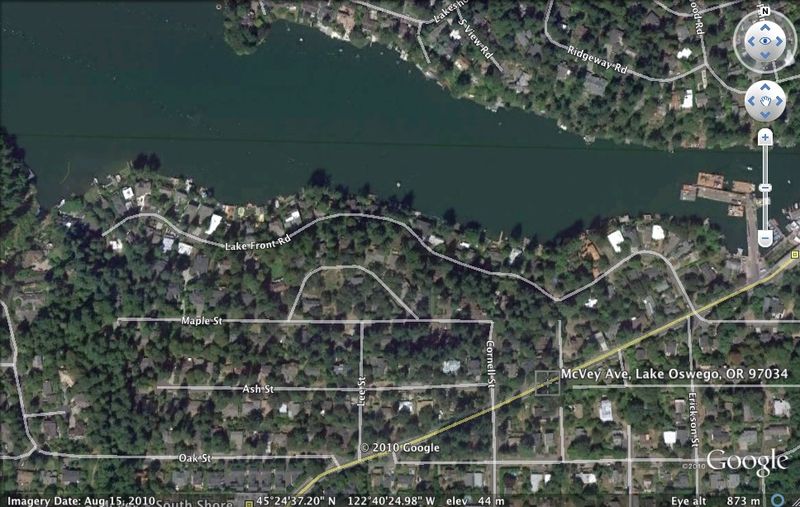 Does nobody understand the principle of redundancy in networks?  Note to the real estate industry:  I will never buy a house that cannot be escaped in at least two directions — and preferably also by at least two modes of transport.  We’d build much more resilient suburbs if everyone took this view.

Bulletin: Young Adults Don’t All Want Cars
Los Angeles: Before You Board, There’s a Quiz