Bicycles have always had an anxious relationship with local-stop street-running transit, both bus and streetcar.  On a street without separate bike lanes, bikes and local-stop transit tend to end up sharing the "slow" traffic lane — typically a lane that's either next to the curb or next to a row of parked cars.  The difficulty lies not just in the obvious ability of rail tracks to throw a cyclist, but more generally in the fact that many cyclists like to move at something close to the average speed of local-stop transit — generally 10-20 mph.  With buses at least, the pattern is often for a local bus and a cyclist to "leapfrog," passing each other over and over, an uncomfortable and mildly risky move for both parties.

Streetcars are much less likely to pass a cyclist than a bus is, and this, come to think of it, may be one of the many little reasons that streetcars often end up being slower than buses when you control for other differences (in right of way, fare handling, signaling, enforcement, etc).  Cyclist friends have often told me that they prefer cycling alongside streetcars rather than buses becuase streetcars don't make surprising lateral moves.  This is true, though of course the lateral motion of buses is a normal part of how they get through traffic, and how they often keep moving in situations where a streetcar would get stuck.

Mia Birk has a good article today arguing that bicycles and streetcars can be friends.  So far, though, the only examples she cites of really successful bicycle-transit integration are from streets where there's plenty of space to separate the two modes, such as Portland's King/Grand couplet.  She's involved now in a consulting team looking at how streetcars will interact with cyclists along a proposed line on Seattle's Broadway, and I look forward to seeing what they come up with.

Birk is clear that the basic design of the starter streetcar lines in Portland in Seattle — operation in the right-hand (slow) lane next to a row of parked cars — didn't provide good options for cyclists needing to avoid the hazard of the streetcar tracks.  She wants to see better separation, but when looking at a dense urban street like Seattle's Broadway, it's hard to see how they'll deliver that without undermining either on-street parking or pedestrian circulation.  She notes one situation in Portland (14th & Lovejoy) where the streetcar-cyclist conflict was arguably resolved at the pedestrian's expense: 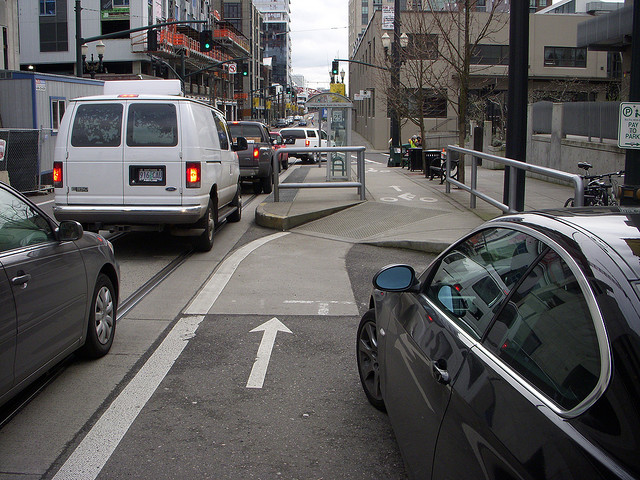 … and she's clear that this isn't the outcome she's after.  (This idea of a bike lane that passes between a transit stop and the sidewalk is common in the Netherlands.  It can work well as long as there's ample sidewalk width.  It's less nice in situations like this one where the remaining sidewalk is constrained.)

If I sound a little cynical about the prospects for harmony between local-stop transit and cyclists, it's because this is a geometry problem, and geometry tends to endure in the face of even the most brilliant innovation.  The examples in Mia's post seem to confirm that if the street is wide enough, it's easy to separate cycles and transit, but that if it isn't, it isn't.

When the problem is this simple, it's not hard to reach a point where you're sure you've exhausted all the geometric possibilities.  At that point, you to make hard choices about competing goods, producing something that all sides will see as a compromise.  Hoping for new innovative solutions can become a distraction at that point, since no innovation in human history has ever changed a fact of geometry.

Finally, if a streetcar ever does go down Seattle's Broadway, it had better be compatible with buses as well.  Broadway is an important link in the frequent transit network, with lines that extend far beyond the local area and thus make direct links that a starter streetcar line cannot replace.  What will happen to these buses?  If they share the streetcar lane, what will their role be in the streetcar-bicycle dance?

41 Responses to bicycle vs transit problems

You are here: Home › bicycle vs transit problems