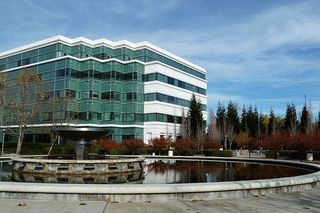 Lisa Margonelli has a nice short piece in the Atlantic today on the sustainable transport achievements of Bishop Ranch, an enormous business park in suburban San Ramon east of San Francisco.

The park was developed from farmland by Masud Mehran's Sunset Development Corporation in 1978 on the belief that San Francisco real estate would soon become expensive and companies would need cheaper space for their administrative services. His grandson, Alexander Mehran, describes the transit program as "a necessity that developed into a whole different animal." When the park started, it was simply too far from anywhere. "We were getting crushed by people going to work in Walnut Creek and Dublin," where the BART stations are. As a result, the ranch bought a fleet of buses and worked with the city and county transit agencies to subsidize both bus routes and bus passes for workers. There are now 13 different bus routes running to the park, and the connections to BART and various local train and express bus services are coordinated. On its website, the Ranch now pitches its transit program as a competitive advantage.

The most important word in that paragraph, of course, is subsidize.  Suburban business parks are expensive, per customer, for transit to serve, so a suburban employer can't expect attractive or useful service simply by demanding it.

The second most important word is cheaper, which in the suburban context is sometimes an illusion.  Bishop Ranch exists because it was perceived as a cheaper location for business.  It is, but partly because land value follows access.  The cheapest site will usually be the one with the worst transportation problems, and if a business chooses the site solely on those grounds, they're transferring the hidden cost of transportation onto their employees, their customers, and the transit agency.  Employees can quit, customers can go elsewhere, and increasingly, transit agencies, too, are pushing back against serving these cheap-because-inaccessible sites, by suggesting that employers take responsibility for some of the cost burden created by their choice of location.

Finally, it's worth noting that Bishop Ranch is a fairly intense business park, with many multi-story buildings.  Effectively it was a single-use new town of considerable density, so while the location was difficult for transit, transit agencies still had a ridership motive in serving it.  If it were being built today, I hope Bishop Ranch would be mixed-use, with some residences mixed in, and also located with greater care in relation to existing and potential transit corridors, on the "Be on the Way" principle.  Still, for being what it is, Bishop Ranch deserves a lot of credit for taking responsiblity for the transit consequences of its site, and investing in services to help overcome those barriers.

futility, geometry, and action
conservatives commit to federal funding of transit (in australia)

You are here: Home › should inaccessible employers subsidize transit?