Posted on May 13, 2011 in Downtowns, Seattle, Sydney, Urban Structure

How important is it that the transit services converging on downtown all go right to the core of downtown's demand?  In a city with a strong downtown, a reactive, demand-driven view of planning will add more and more transit into downtown as demand requires, because the loads are always highest there.  But sometimes, it can make sense to avoid the center of downtown, or to slide past downtown along one edge.

Zach Shaner's new proposal for the core area of Seattle is a nice example.   (Click to enlarge and sharpen, or see JPG here:  JPG ) 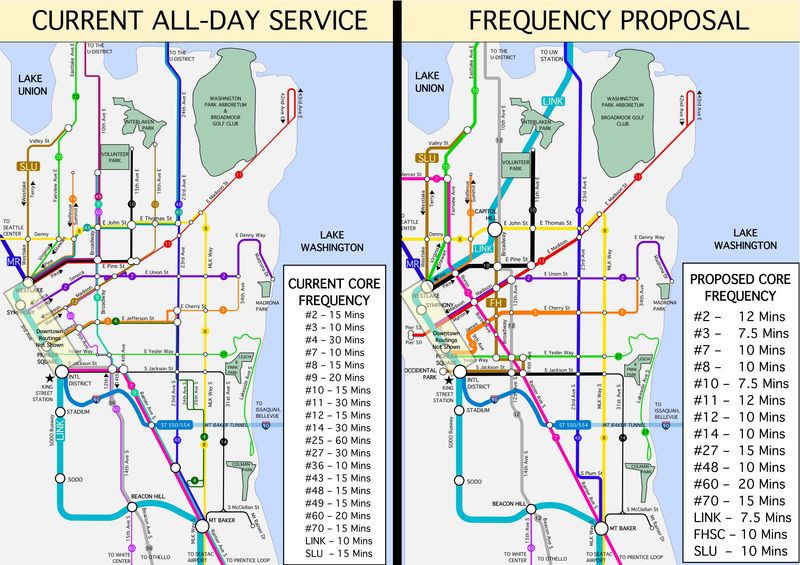 You don't have to know Seattle to follow this.  The core of downtown is the little shaded box on the left, where LINK light rail will be in a subway and other frequent buses will run on the surface.  Most of the rest of the map area is also dense, so this is an area where you would expect a high-frequency grid to be possible, easily serving trips from anywhere to anywhere.

But the map area is also ferociously hilly, so fitting the classical grid to this terrain has always been a struggle.  Still, Zach suggests that once the LINK light rail extension northward opens, ending at the University of Washington just off the north edge of the map, something remarkably gridlike might come into being.

Several of the design principles that I often advocate are at work here.  First, Zach has focused on running on the fewest possible streets so as to provide the maximum possible frequency.  Second, he's mapped both the existing and proposed networks so that you can see this frequency difference.

But he's also provided a nice example of the oblique approach to downtown, which is a way of balancing the distributive quality of a grid with the need to serve downtown's concentration of demand.

Look at the magenta line coming from the southeast.  It's Line 7, now the single busiest bus line in Seattle.  Off the map to the south, it extends about 5.5 km (3.4 mi) onward through dense, old, and historically low-income areas of the Rainier Valley.  It touches the rail line at Mount Baker station, just inside the map, but it flows onward into the city, currently going right through downtown.

Zach proposes instead that Line 7 approach downtown but then bypass it just to the east, via Boren Avenue.  He would do this to create a new crosstown (north-south) opportunity to reach dense north parts of downtown (including the South Lake Union redevelopment area and Seattle Center, which is right where Line 7 exits the map on the west edge) without going right through downtown's heart.

What would the dense downtown ridership of Line 7 do?  Well, some of it would transfer to LINK where the two lines touch at the south edge of the map.  Others, depending on exactly where in downtown they were going, might transfer to any of several very frequent east-west services crossing the line.  But many who now seem to be going downtown would reveal that they're really going elsewhere.  This is the key.

Line 7 ridership shows massive boarding and alighting downtown, and downtown is certainly an overwhelming destination.  But you always have to ask if the concentration of downtown boardings is evidence of what people want or what the current network structure requires of them.  People going to the dense and fast-growing areas on the north edge of downtown will find Zach's revision a dramatic improvement.  Many others may be going still further north, to anywhere in the northern half of the city, in fact; they currently have to go through downtown to make their connections, because that's where their bus goes, but they could make the same connections to northward services from the revised Line 7, often with quite a savings of travel time.

Obviously, I don't have the data to validate exactly how many people are in each of these categories.  I'm not even advocating Zach's design, but I do think it illustrates an important design concept, one that you will never think of if you're focused entirely on where your current ridership patterns seem to be leading.

Many major cities are facing unmanageable volumes of buses squeezing through a tight downtown.  Sydney, where I lived for five years, has a remarkably similar predicament to Seattle's.  One solution, in Sydney as in Seattle, is to let go of the idea that radial services aimed generally for downtown need to go right through the very center of it.  If there is a sufficient diversity and richness of connection opportuntiies for reaching various parts of downtown, you can often create a better design by sliding past downtown obliquely, as Zach proposes that Line 7 should do.

I don't advocate or oppose Zach's design, but I do think it's a nice illustration of how to fit the "everywhere to everywhere" network design principles (such as the high frequency grid) to a very difficult terrain.  It also raised some interestingly contrasting comments from different Seattle transit experts who've seen it; more on that in another post.

vancouver cartographers and map geeks!
livability vs dynamism (quote of the week)

You are here: Home › downtown networks: the oblique approach