Architects and urban visionaries play an incredibly important role in a leadership-hungry culture.  They have to know a little bit about almost everything, which is hard to do.  But for some reason, certain segments of the profession have decided that the basic math and geometry of transit isn't one of those things they need to know, even when they present themselves as transit experts.

To see what I mean, I encourage you to watch this short video from Gensler Architects in Los Angeles.  It's a concise summary of all the crucial mistakes that you'll need to confront in much "visionary thinking" about transit.  (If Gensler takes down the video, read on.  I've inserted enough screenshots from it that you can follow.)

The five most common "visionary" mistakes about transit, all on display in the video, are:

So watch the Gensler video if you can, but you can also follow along via my screenshots and comments below.  You'll see these mistakes again and again in the urban visioning business.

0:27 Gensler states the question as "Get LA on transit HOW?"  No argument with the question. 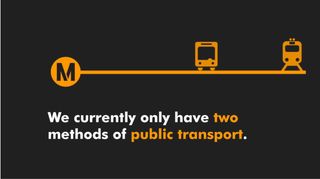 0:51  Transit is divided into a set of vehicle types, and these types (light rail, metro, bus) are confused with "methods" of transport.  For more on the absurdity of treating bus/rail distinctions as primary, see here. 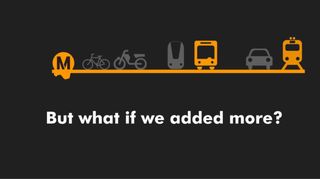 0:53  "We have only these methods.  What if we added more?"  An interesting question to which transit experts (and economists, and engineers) have a very good answer.  The more competing systems you establish in the same market trying to do the same thing, the less well any of them will function, and the less investment any one of them will justify. 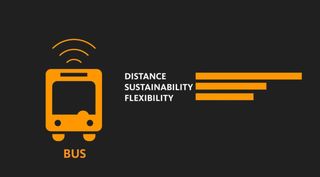 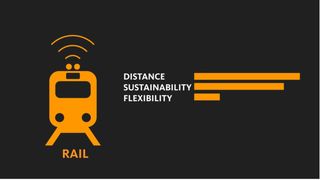 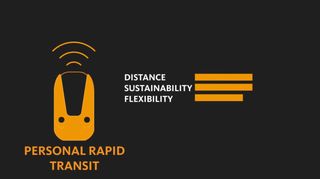 0:56  They now begin to analyze vehicles in terms of distance, sustainability, flexibility.  What's missing?   Cost!  Efficiency!  Some things are just wildly expensive relative to what they deliver.  Darrin Nordahl has already been down this path, evaluating technologies by discussing only their supposed benefits.  That's not evaluation, it's either aesthetic rumination or marketing.  (Neither of those are bad things, but they have to be identified as what they are.) 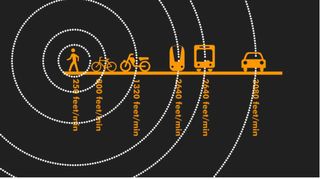 1:20.  They talk about distances but their graphic is talking about speeds.  These are fair for personal modes but absurd generalizations for the transit modes. When your notion of "rail" conflates light rail, heavy metro rail subways, and 70 mile-long infrequent commuter rail, the word "rail" means nothing relevant about speed or travel distance, or any other transit outcome apart from capacity.  (Note that the earlier claim "we have only these methods" implies that these three kinds of rail are the same thing in every way that matters.)

Likewise, if you think buses have an ideal distance, you're unclear on the role of local buses vs Bus Rapid Transit vs long-haul expresses, all of which are very successful in Los Angeles.  Gensler imposes a "technology first" frame on the data, thereby concealing almost everything that matters about how transit gets people where they're going.

In transit, the real speed distinctions within transit are usually not direct results of technology.  Speed is the result of how often you stop and what can get in your way.  See here. 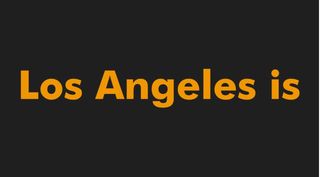 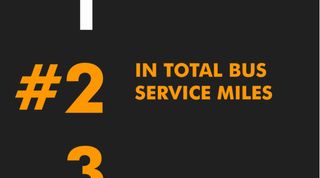 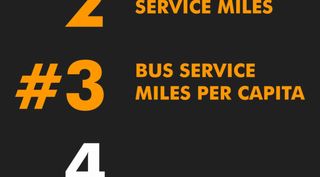 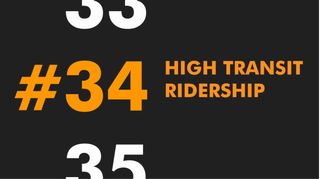 2:00.  Staggering incoherence in comparing input (bus service) to an unrelated output (total ridership including rail).  What's more, the numbers are misleading.  Per the 2011 APTA Fact Book, Los Angeles MTA has America's 3rd highest total boardings and 2nd highest total bus boardings.   In the context of its starved resources and the vagueness of public support for it, the Los Angeles bus system is working brilliantly. 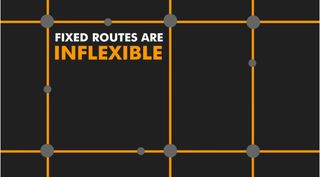 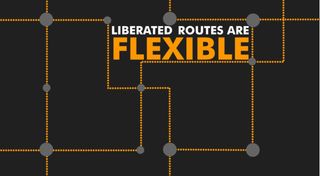 Which of these two networks would you rather travel on?

Gensler has mistaken metaphor for logic.  They think that "liberating" bus routes has something to do with liberating or enabling people.  The idea is barely explained and totally incoherent.

Today, in our supposedly "inflexible" system, you'll find a bus going down a major boulevard with maybe 60 people on it.  Some of them want to go somewhere straight ahead, some want to go to somewhere ahead and to the left, some want to to somewhere ahead and to the right.  Fortunately, they are in a high frequency grid system, which will take all of them to their destination, either directly or via a connection to a north-south line, probably by a path similar to what they'd have followed if driving.  So this huge number of diverse people making diverse trips are all moving toward their destinations on a reasonably direct path.  This is the extraordinary power of the high-frequency grid.  So instead, Gensler proposes bus lines should twist and turn just because somebody with an iPhone wants them to?

Personal technology has great opportunity to better inform us about all transit services, and it can transform the convenience of transit at low-demand places and times, by influencing the operations of low-ridership, low-capacity services, such as demand-responsive buses and taxis.

Quite possibly, personal apps will allow demand-responsive service to replace some low-demand fixed-route buses, which is fine with most transit planners.  Those low-ridership buses run mostly for social-service or "equity" reasons, and if there's a more efficient way to do that, I expect many transit experts would be all for it.  It would let them concentrate on the high-ridership, high-capacity services that can achieve a great deal of personal mobility and sustainability, very efficiently.

Successful high-capacity frequent transit needs to take on more of the rigidity of subways, in order to spread the benefits of subways (which we can't afford everywhere) more widely.  That means it needs to be even more frequent, reliable, legible, permanent, and reinforced with infrastructure investment.  Fortunately, within limited resources, many transit agencies are now trying to do that.

The video is full of entirely laudable and familiar green ideas, but then we get to this …

To me as someone who values my personal freedom, flexibility, spontaneity, human dignity, and travel time, Gensler's Los Angeles would be a hell-world worse than Blade Runner.  Fortunately, it's also mathematically impossible.

We've blown up transit networks before, of course, and Gensler's vision should remind us of what was thought about cars vs. transit in the 1940s.  Like personal technology today, cars were just so wonderful for the individual that we just assumed the world could be made in their image.  (The technical term for this idea — that the world will bend to reflect my emotional needs and enthusiasms — is narcissism.)  So we made a deep investment in a car-and-highway technology that could not possibly scale to big cities.  Gensler proposes the same mistake:  Because our iPhones are so cool, they assume that the city, at every scale, can be reinvented around them.

For a more positive vision of the future of Los Angeles, one that begins by noticing the city's strengths and looking at how to build on them, see here and especially toward the end of an interview here.

48 Responses to How urbanist visionaries can muck up transit

You are here: Home › How urbanist visionaries can muck up transit