A Chicago-area planning nonprofit, the Metropolitan Planning Council, has released a plan for 10 Bus Rapid Transit within the City of Chicago.  The final report is here:  Download BRT TRB Report Final

The work, led by consultant Joshua K. Anderson, is admirably wonky.  It analyzes a huge range of arterial segments to identify those that appear best from a standpoint of both constructibility, demand, and nexus with livability values.  The report is a "screening" study, which means it seeks to narrow the range of possibility and encourage more detailed study of those that remain.

This definition is met by almost none of the things now called BRT in North America, or at least not continuously from one end to the other.  But screening is a time to be ambitious about such things. 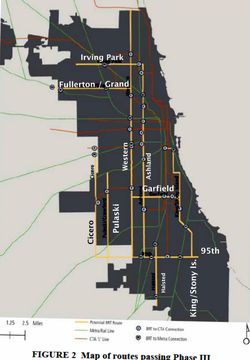 The 10 corridors that survive the screening are shown on this map.  They're a mixed bag: portions of segments, some of them maybe too short to be effective as BRT, but also two very long corridors, Western and Ashland Avenues, one of which is probably the most urgent BRT project in the city.

The study appears to be silent on whether these are envisioned as open BRT or closed BRT.  Open BRT means that the infrastructure can be used by bus lines that flow onward beyond it to other destinations.  To take an obvious example, an Irving Park BRT that ends at Ashland, short of the Red Line's connection opportunities and the high density of the lakeshore, is unlikely to be satisfying as a complete corridor.  But if it's an open BRT, usable by buses that continue east, it could well be useful.

Unfortunately, a presumption of closed BRT, in which buses can't continue beyond the limits of the infrastructure, seems to be implied by the author's decision to discard super-dense Lake Shore Drive from the analysis simply because of the complexity of branching patterns that it requires; this assumption will have to be reconsidered in light of open-BRT best practice.

The study illustrates a common challenge in analyzing large, long transit corridors.  Many of the key issues, including available right of way and "livability" impacts, are segment-by-segment affairs; if these dominated the analysis, the result would be a huge pile of largely disconnected short segments, which could not deliver the intended outcomes.  So the author streamlined, discarding small segments and emphasizing larger continuous ones, which is quite right.

But issues of network integrity and completeness seem not to be fully considered.  The report needed to step much further back and describe the underlying geographic structure of Chicago, which determines the type of services that could be relevant to citywide mobility needs.

Except near the lake, Chicago is an extremely regular grid of arterials spaced 1/2 mile (800m) apart.  CTA follows this grid with a grid-pattern of long bus lines that attempt, as much as possible, to cover the entire length of an arterial all the way across the city.  This achieves the important goal of grid completion.  The purpose of each line is not just travel across that street but to complete a network in which people can travel from literally anywhere to anywhere else through a simple L-shaped movement: 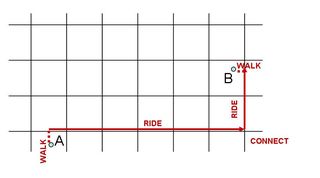 For more on the high-frequency grid principle, see here.  Obviously this structure only works, in its purpose to serve any origin-destination pair, if its constituent lines flow all the way across the grid to its natural edge.  This is the problem with many of the proposed BRT corridors in the report.

Not everyone sees this grid, because Chicago also has an overlying radial system of rapid transit, which runs along diagonals pointing toward downtown.  The two overlaid elements — radial trains and grid buses — work well together, but if you focus too much on the trains, which are mostly about going downtown, you miss the power of the underlying grid to complete trips on any origin-destination pair by a reasonably direct path.  (The report discusses "network integration" only in the form of integration with rail.  Confusingly, too, it gives heavy emphasis to connections with suburban commuter rail — whose poor frequency makes connection difficult — and little to the bus-bus grid connections that are the essence of the network's anywhere-to-anywhere versatility.)

Given Chicago's grid structure, and how well it already works, BRT needed to be understood as a system of grid accelerators, just like the Metro Rapid and proposed Wilshire subway in the similar grid of Los Angeles.  Obviously, if you can concentrate particularly heavy demand on a few elements of the grid, you can justify an overlay of much faster service, stopping only at the grid connection points every half-mile.

On that score, Western Avenue is clearly a winner.  It is the longest arterial in Chicago, running north-south the entire length of the city.  Its extreme length creates reliability issues on a local-stop service, which has caused CTA to break it into three lines thus reducing its usefulness for continuous movement.  BRT would be an opportunity to recombine these three segments to offer a service that would be understood as an intrinsic feature of Western Avenue over its entire length.   Western is also far enough out of downtown that the direct paths it serves are much faster than riding rail into downtown and back.  A vast range of trips between many parts of Chicago would find a Western BRT line useful.

None of the other corridors identified in the study can match Western in the utility that arises from extreme length with lots of connection opportunities.  Ashland is obviously close.  Most of the other proposed segments are simply too short, and would be useful only as open BRT segments used by buses that run further.  Effective BRT has to serve long corridors, because the tradeoff that BRT requires of the customer — walk further in return for faster service — makes sense only for a fairly long trip.

To sum up, the report is very useful and highly recommended.  But it misses (or at least downplays) two points that are missing in many similar studies, and that really matter:

Still, the report can do a lot of good, and bravo to the Metropolitan Planning Council for sponsoring it.  Chicago really needs to start accelerating its bus grid, especially on its busy, high-stakes, versatile corridors like Western.  I hope this study helps to move that along.