People learn from doing more than by being told, so public outreach is increasingly turning to various kinds of simulations, which can broadly be called planning games.  A planning game is any interactive exercise that allows people to play with the tools of planning, under some kind of budgetary constraint, and thus to experience the hard choices that arise from the material.

You've probably played with online tools, often published by newspapers, that invite you to "balance the government budget yourself."  Planning games drill down to a more detailed level than that, but they share the same spirit:  They invite the citizen to express her views through grappling with the actual problem that government is facing.  When used as outreach tools, the rule of these games is: Listen and educate at the same time.

Planning games can be group exercises in public meetings, but of course they can also happen on the web.  Web-based versions are better for allowing an individual to explore at her own pace, but they don't fully expose the user to the diversity of opinions and needs in a community.  Public workshops tend to be much better for that.

To build stakeholder consensus around a transit plan in a difficult area, TransLink in Vancouver BC uses a geographical planning game.  I helped them hone this tool for their South of Fraser area in 2006 and they have used it successfully in other areas since then.  It can be helpful in many other contexts.  This planning game technique, applied to a fictional city, is also the core of the interactive course in network design that I teach. 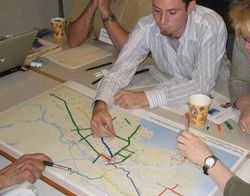 For a long-range infrastructure plan, stakeholders would be gathered in groups of about six around a map of their community, with a layer of clear acetate over it.  We'd give them some tools:  the red tape is an elevated metro, the blue tape is light rail, the green tape is frequent bus service.  Here, fellow citizens:  We have 24 kilometers of green tape that we can lay out.  You can trade five km of green tape for a km of blue, or ten km of green tape for a km of red.  Design your own system, but experience the process of making hard choices as you do.

A similar exercise can be done when doing a short-range bus service redesign.  Here, you're just dealing with frequencies of service rather than technologies, so the costs are more obvious.  Red tape is a bus every 15 minutes, blue is a bus every 30 minutes, green is a bus every 60 minutes, so a kilometer of red is worth two km of blue or four km of green. 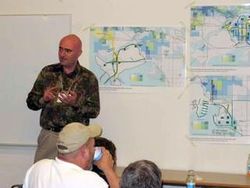 At the end, we understood their views, but more important, they understood each other's views.  They also understood the underlying problem facing the transit agency, so they could form more useful and constructive ideas in the future.

In my course, I add a number of other features to this tool, including different ways to analyze the resulting networks, and also ways to humanize the issues.  I also emphasize how the geography of transit generates choices among competing values, which is why citizens and their elected officials ultimately need to make the decision.

I advocate geographically-based games because the network design problem happens in geographical space, and you can't really see either the obstacles or the opportunities unless you look at a map.  But Community Transit did it differently …

Like many US agencies, Community Transit is having to make a steep service cut this year, around 20% of their total service.  They wanted a way to engage citizens in thinking about the choices that this implies, so they invented their own "Transit Values Exercise."

Instead of talking about geography at all, they forged a set of 15 fictional people who represent slices of their market.  The question for participants was:  "Which of these people should we no longer serve?"

Each person is represented by a card: 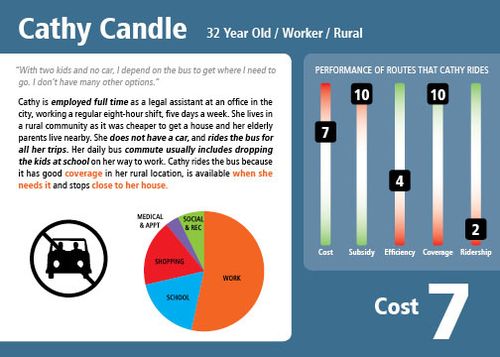 The narrative on the left is Cathy's story, but we're to understand that there are many people "just" like her.  Services that meet the needs of these people have a total cost of 7 points (lower right) out of a total of 125 for all the cards.  Icons on the left tell us that Cathy doesn't have a car (or a bike, or a wheelchair) and gives a sense of the diversity of trip purposes that she uses transit for.

On the right, the five bars describe the consequences, for the whole network, of serving Cathy and people like her.  Note that she lives in a rural community, so it's not surprising that (compared to a whole network that also serves a larger urban area) she tends to need services that have high cost to operate (first bar) and require high subsidy (second bar.)  Like all rural services, the routes Cathy rides cover a large area (high "Coverage") but have very, very low ridership by system standards.  The middle bar, "Efficiency," refers very narrowly to schedule efficiency: the amount of dead running required.

(Obviously there's a little redundancy among these five, since subsidy itself is a result of ridership and cost [as well as fare levels, not modelled here].   Logically, subsidy could have been omitted, but it does tend to pique the interest of more conservative participants.) 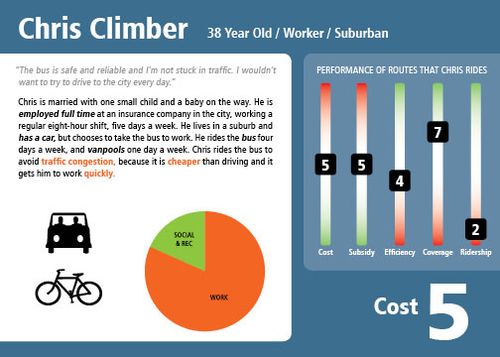 You get the idea.  At the APTA Multimodal Operations Planning workshop on August 17, a roomful of professionals had a chance to play with this tool, choosing different people to "discard" (harsh, but that really is what we're doing) and then seeing how that choice effects the system's cost, subsidy, efficiency, coverage, and ridership.  For example, if you discarded only the patrons associated with low-ridership routes, you can cut almost 50% of the system's total coverage area while cutting only 20% of cost and barely 10% of ridership.  Rural coverage is a lot of area, and almost no riders.

It was clear that the Community Transit exercise would teach citizens about basic budgetary tradeoffs, and obviously it gives those tradeoffs a human face — or at least a set of demographics with a name [though not an ethnicity, an annual income, or a political persuasion].  The bracing task of jettisoning human beings, like deciding who gets the lifeboats on a sinking ship, certainly must have impressed participants with the gravity of the problem, and perhaps, in aggregate over time, such tools could motivate more support for funding sources that could change the picture.

But it's still about geography …

In the last stage of the Community Transit exercise, participants are finally given a map of the fictional community where these people live: 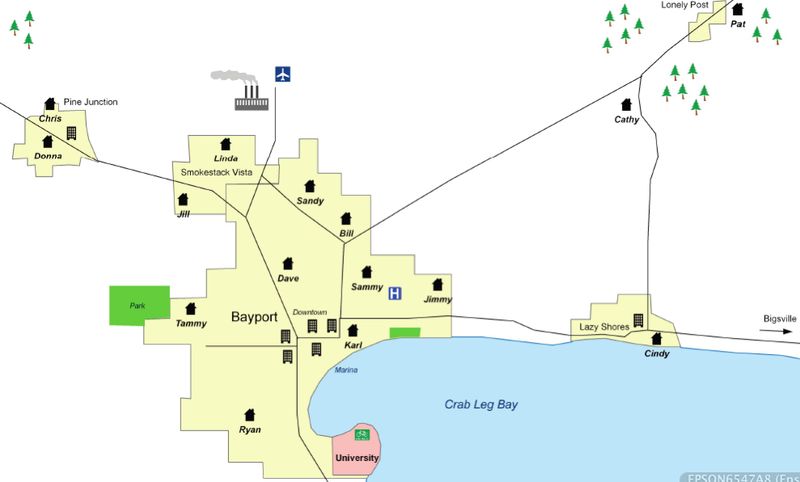 Knowing this, we were to make one final assessment about whom to discard.

For me, this part was a problem, because the geography revealed so much more than the game wanted us to think about.  Now, for example, it was apparent that Cathy lives on the way to where Pat lives, so if we "discarded" Cathy but kept Pat we knew Cathy would still have some service.  Yet there was no way for the game model to capture this obvious fact.  I would probably have introduced the map much earlier in the exercise, and thought about how to integrate its geographic information into the "human" discussion about which cards to discard.

Ordinary citizens often assume that a transit agency's service to them reflects an assessment of what they need or deserve.  In fact, this is only true if you're at the outermost end of a line, where the line is serving only you.  Everywhere else, transit efficiency lies in combining the needs of diverse ranges of people onto a single vehicle, and this relies, above all, on taking advantage of situations where multiple people, often with very different demographics, are travelling along the same reasonably direct path.  If you're on such a path you'll get better service than if you're not, even if you are exactly the same person in all other respects.

I wonder if, by steering us away from noticing the way transit combines diverse markets, the Community Transit game may have missed an opportunity to educate about how transit efficiency actually works.  By presenting us with people whose needs are cheap or expensive to serve, the exercise may confirm a widespread and false assumption that transit planning really is about assessing the merits of interest groups and communities.

That's not what it is at all.  Your transit service isn't a judgment about who you are, but about where you are!  The barriers and opportunities presented by your location (and the location of places you go) are what determine how much service you can expect.  We need to put a human face on our work, and help people understand the human consequences of changes, but we also need to help customers focus on the geometric fact of life.  More than anything else about you, your location matters.

do line numbers matter at all?
chicago: a new bus rapid transit plan

18 Responses to what makes a good “planning game”?

You are here: Home › what makes a good “planning game”?