Here's a fun weekend read, by British transit-marathon champion Adham Fisher, shown at right in the process of conquering Madrid.  You know you love your transit system when your community can honor exploits such as his.

I admire rail fans. Though I am sure that other nations have people who yearn after trains, I almost consider it a typically British pastime. Individuals take a day out to descend on a station where they know lots of weird and wonderful trains will pass. Notebooks in hand, they write down the numbers; cameras on tripods, they take photographs of the carriages, and a different train in an unusual location is always a bonus. At these platform picnics can be a good social atmosphere. And the amount of knowledge rail fans have is astonishing. But I don’t like public transport to that extent. I wouldn’t want to stay in one place all day documenting things. I like to move.

Rail magazines here might deal a lot with main line intercity and heritage trains. But I like city trains, specifically urban rapid transit. I try to go around underground rail networks as quickly as possible in one day, visiting every station. There is actually an official Guinness World Record for doing so on the London Underground – currently 16 hours, 29 minutes, 13 seconds – which I have attempted 11 times, often completing the system but not touching the record. I have also undertaken similar challenges on buses and trams.

This is not easy. Notebooks are required for this exercise to write the route down station by station, the arrival and departure times at/from each and the operating numbers of the trains. Cameras are required to take photographs of every station. Every so often, a challenger must ask a generous member of the public to sign a witness statement, saying they were where they say they were. Basic fitness is useful; if one wants to travel as quickly as possible, they must run when they transfer. Just one train missed could mess up the schedule entirely. Running is not restricted to stations, and neither are the participants. Guinness rules allow running or the use of other scheduled public transport to travel out of the system between adjacent stations, which can save time; the train need only arrive at or depart from the station for it to count. It is physically and mentally demanding, being up extremely early, probably not going to bed until very late, with no guarantee of success due to service delays, line suspensions and signal failures which can occur any time of any day, as regular commuters know. One of these can mean the end of an attempt if it slows you down enough and prevents you going further. And the average commuter who hates the Tube and tries to spend not one single second longer on it than absolutely necessary, will surely ask: why? Why would you want to waste a whole day underground doing something that pointless?

Admittedly, I’m not quite sure. After all, public transport is merely a mundane and functional thing, no? Designed to ferry people from home to work, A to B, and nothing else. But the beauty of something like this is that I can make the ordinary extraordinary. I can buy a travelcard and the amount of single journeys I make per attempt add up to many times that cost. An unorthodox exploitation of the system. I have been greeted with incredulity and called eccentric by some for doing what I do. Of course, it is not a normal activity; I admit that straight away. But neither is climbing a mountain. Mountains are in far away places with treacherous terrain and tangible danger. People climb mountains because they are there, and the same reasoning applies to those who choose to make much more out of something ordinary on their doorstep. Mountain climbs are many times more demanding, and I don’t think I could do one; I would rather spend several hours underground on trains than eight miles up Everest in temperatures well below freezing and extremely thin air.

No other official world record is considered for traversing a transit system apart from in New York, so the fact I have performed the feat in other cities will no doubt seem even more pointless. Having attempted the London record several times without success, I began to look at other maps, realising it could be even better to plan a route around a system where perhaps few people might have done the same. With a wealth of European metros just across the Channel, I have visited every station in cities including Paris, Madrid, Brussels, Amsterdam, Rotterdam and Lille. The challenges are worthwhile when completed, but being recognised for it is also a major bonus. I have been interviewed on radio, been the subject of a museum story, but the best reaction was to my first attempt out of Europe, on the Chicago L. I told one or two people I was doing it and was asked to contribute to the main CTA blog. It became perhaps the most debated story of 2011 in the comments section. A while later, three students read about what I had done and tried to do the same thing, but were slightly slower. Articles were written about them and my name started to be dropped as the “record holder”. 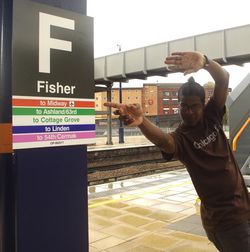 Next thing I know, I am contacted by the CTA to be informed its President, Forrest Claypool, wants to write to me personally. Which he does, also sending me a special Chicago-styled station sign with my name on. Such recognition is, in many ways, better than a world record. Has any other transport authority honoured an individual for riding its system to extremes? No Guinness certificate but I can joke about having a station named after me.

Paris yielded another special run, and led to my other public transport project. At the same time as planning the excursion, I happened to be writing a song with my friend Annanem called Métro, which listed every station in alphabetical order. I was being discussed and thought that if we finished the song in time, it could be another promotional tool. So we put it on YouTube the week before I went out. A short clip was played on French radio to accompany an interview I gave them.

Afterwards, I thought of returning to Paris to play the song live, having been told it was very off the wall. Only having the one tune and hoping to secure a gig, I asked several people if they would like to write songs, poetry, anything, about a rapid transit system of their choice. Enough material was submitted for an album, which I compiled and called the Metro EP (cover at left). All artists were given the collective name 1000 Stations. 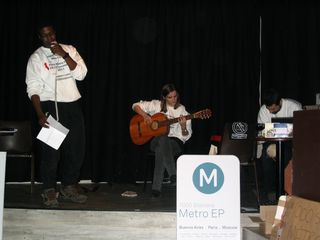 I and two other contributors launched the album in Paris, playing it in an arts venue and also giving out CDs to a few people on the Metro, explaining what it was about. We have just played the first UK gig with the project and hope to release it very soon.

That is an example of public transport creativity. An album was born out of my tendency to use public transport in an unorthodox fashion, which I think itself is a bit creative – devising the potentially quickest way to go around a rail network, poring over maps, plans and timetables, making transfers that would seem silly to a local. And it’s incredibly exciting to do, especially when you don’t even know the city. I had never been to Madrid before, and with the route drawn up at home, had just one or two days to research properly and become accustomed to the Metro before I attempted to visit all 235 stations.

Doing this is an interesting way to see a city. I talk to people who wonder why I have just jumped onto a train at full speed, taking photographs and writing furiously. I do make time to experience some culture and sights, but that has never particularly bothered me. Landmarks may be seen from metros as several run above ground. And just as interesting to me are the local areas; from the built up blocks of inner Chicago … 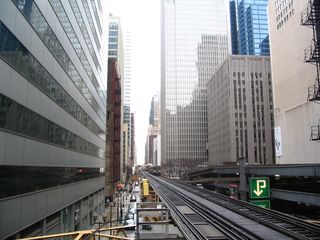 to the vast plains beyond Madrid’s city boundary … 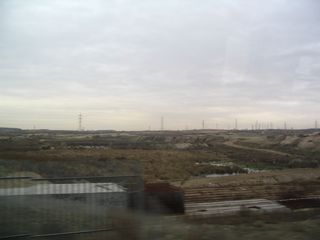 The Tube Challenge has gained popularity in recent years; there are a few websites dedicated to it and an entire online forum bustles with record holders and hopefuls. The New York Subway’s Ultimate Ride has had followers for decades; the Amateur New York Subway Riding Committee was founded in 1966. Moscow has had English teams flying out to tackle its architecturally magnificent Metro. Others have tried Paris, and I am sure several people have been all the way round on small networks like that of Glasgow.

You might consider having a go at this. Not necessarily at a fast pace, but how you like. I know of someone who visited every Paris Metro station in six months. Break out of the box, make as many journeys as you can, ride on every single piece of track, tell the system what you want to do. You will have a different perspective of a city. Regarding my Chicago journey, a spokesman for the CTA said “We have a lot of people in Chicago who ride the L every day and would never even think of doing anything like this.” So you’ll be one up on the locals and join an elite club. And even if you are thought of as eccentric, someone might say to you “I couldn’t do that”. Like me with mountaineers. And rail fans.

wellington: some sharp (and critical, and nice) comments on our network plan
london: how to get a seat

9 Responses to guest post: the transport challenger (by adham fisher)

You are here: Home › guest post: the transport challenger (by adham fisher)