If your city is producing lousy outcomes with its bus services, are you sure it's because of the buses, or the drivers, or the sidewalks, or the degree of "transit oriented development", or that they're not streetcars?  Maybe it's because the network structure is obsolete.  A study team led by Gregory Thompson of Florida State looked at the success of Broward County Transit, which serves greater Fort Lauderdale.  Apart from a few special enclaves, Fort Lauderdale is unlikely to be high on anyone's list of urbanist paradises.  It has plenty of gridlock, plenty of pedestrian-hostile environments, and the usual abundance of oversized roads that seem only to generate more congestion. 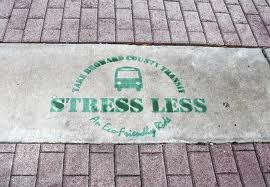 Yet the hard-working if unappreciated Broward County Transit system is producing excellent outcomes through multidestinational design.  Instead of running a radial system into a single downtown, they decentralized to serve many destinations, through a network of routes making easy connections with one another. Eric Jaffe tells the story today in Atlantic Cities.

The whole case for this kind of design is in my book Human Transit, esp Chapter 12 and 13, but Thompson has been making it for years.  I'm impressed at how well it's working in not-especially-transit-friendly Florida metros.  Tallahassee took the plunge last year.

Obviously this is an issue close to my heart.  I came to consciousness as a transit planner during the decentralization of Portland's network in 1979-82, which created local pulse networks in each suburban area and culminated in the high-frequency grid that today covers most of the city.  Almost every network design I've ever done has helped to improve the multi-destinational utility of transit networks of all sizes.  Huge amounts of resistance have to be overcome.  But if they're designed well, they work.

Finally, kudos to the folks at Atlantic Cities for coming back to this issue with one great story after another.  I'm not sure I've ever seen a major media outlet build up this degree of internal understanding about the fundamentals of transit network design — a topic that's easily forgotten while obsessing about how cool technologies are.   Is any other American media outlet dealing with network planning issues so clearly?  Certainly not the New York Times, which publishes one story after another in which well-meaning platitudes about social needs are proposed as ways to change the facts of geometry.

paris: “the bus stop of the future”
congress for the new urbanism: my spark of fire and brimstone

16 Responses to fort lauderdale: yet another triumph for multi-destinational networks

You are here: Home › fort lauderdale: yet another triumph for multi-destinational networks