Download the whole thing, which covers all of greater Sydney inside the national park ring, here.  If you work on transport in Sydney, or just want to understand how to get around spontaneously, print it and put it on your wall!  I believe this is the only diagram in existence that can help you find your way around Sydney via frequent services, or understand their current structure.  (Yes, a geographic version would be helpful; perhaps, inspired by this, somebody will draw one.)

Below is the portion covering inner-city Sydney.  That's the largest continuously dense area of the region, and the one you are most likely to know as a tourist.  The CBD and Harbour Bridge are at the northern edge of this diagram, the airport is in the south, and the beaches are in the east. 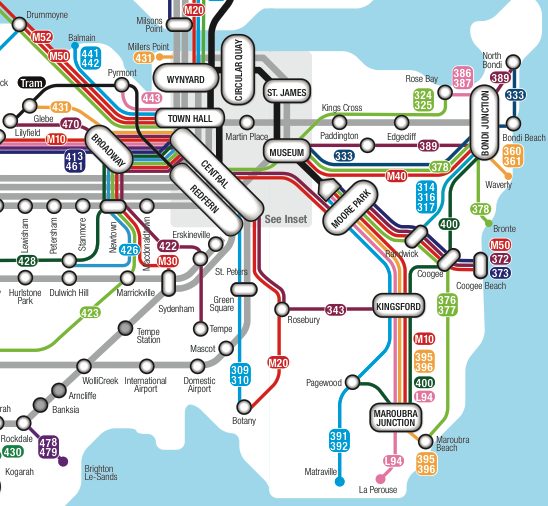 The artist is Kevin McClain, who has just moved to Seattle to join the Accessible Services section at King County Metro.  He tells me it's to be published on the Easy Transport website – a North Shore organisation devoted mostly to special-needs services.  It's odd that such an organisation has produced the most useful diagram of Sydney for people who just want to get around all day without waiting long, but that's exactly what this is.

The maps published by the bus operators — download here – emphasise the complexity of the network by making all the routes look equally important, thus concealing patterns of frequency that would show the customer where they can move freely and easily.  In this it's like most transit maps from before the advent of frequent network mapping.  (For many great examples of frequent network mpas, see my Frequent Networks category.)  The Government deserves credit for fostering the Metrobus product, which is meant to be the future frequent backbone of the network, but there are still many frequent corridors that don't carry the Metrobus logo and M-number, so a Metrobus map is not quite a frequent network map.  The branding of Sydney services is still a work in progress.

The map reveals many issues that are hidden on the current public maps (download here).  Those maps make all the routes look equally important and thus give the impression of intimidating complexity.

Public transport in Sydney has historically functioned in modal silos, with rail, bus, and ferry planning largely unrelated to each other and sometimes even seeing each other as competitors.  That's meant to change under the new integrated transport authority, Transport for New South Wales, which has begun thinking about all the modes together.  I hope this diagram will help them visualise the problem and conceive new solutions to it.

If you care about people who move around all day, who are inclined not to drive, but who value their freedom and won't stand for being stranded for long stretches of time, this is your public transport network.  The gaps in this network are the gaps in people's freedom.  Can Sydney do better?

You are here: Home › sydney: a new frequent network diagram