Here's a new Frequent Network Map for Melbourne, by Campbell Wright, showing where you can get around easily all day if you aren't willing to wait long for public transport.  Download and explore it here:
PNG.  The image below is obviously illegible but the zoomed-out look shows us important things. 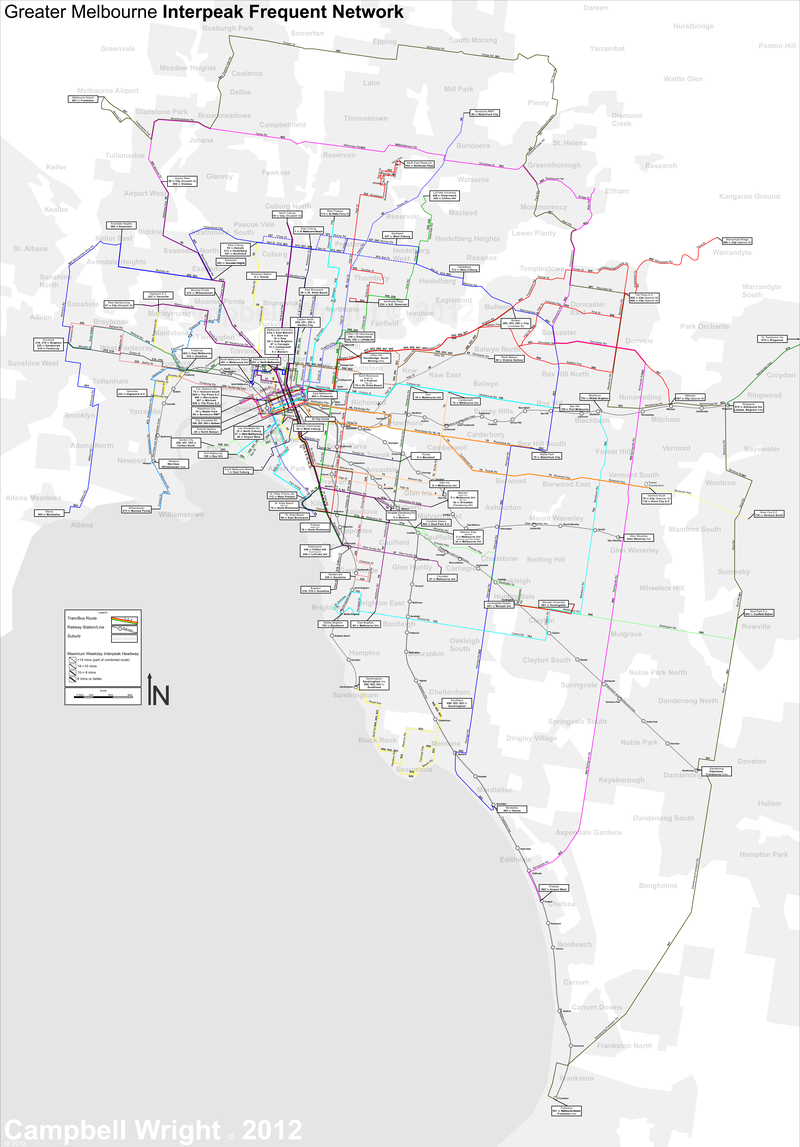 1.  The inner north of Melbourne, immediate north of the CBD, should be a public transport paradise.  It's historic, very dense and has a grid street pattern for easy walking to transit.  It has frequent north-south trams on all the major streets, but it lacks the frequent crosstown services that would make a complete east-west grid for everywhere-to-everywhere travel.  The routes are there, as you can see here and here , but except for the one Mr Wright draws, none are frequent enough to make adequate connections, so their role is largely symbolic. This is probably because there are too many overlapping infrequent routes, and they need to be considated into fewer stronger routes.

2.  The inner east and inner north grids are poorly stitched together.  There are frequent crosstown routes in both but it's hard to get from one grid to the other, except by coming almost downtown, to Hoddle Street, or going way out, to Bulleen where the blue 903 crosses.

3.  Melbourne has lavished great attention for years on the four orbital Smarbuses, inverted U-shaped routes that are obvious as north-south bands across the far right of the map.  What Melbourne really needed was a high-frequency grid, with crosstown (perpendicular to radial) lines concentrated in areas of high demand so that you could go from everywhere to everywhere with a simple L-shaped trip.  The Smartbuses oversimplified the grid concept by insisting, for no reason I can discern and at great cost, that these services all had to be complete U shapes wrapped all the way around the city. regardless of the markets through which they pass.

You can see the effect.  Parts of Melbourne that could support high frequency crosstown service, like the inner north, or the Port Melbourne-St Kilda corridor, don't have much of it, while a fortune is spent on a vast outermost U (the grey line) which creates no grid effect because it lies far beyond the end of most frequent radials.  It's also far, far to long to be operated reliably, as are many of the Smarbuses.  The reliability can be assured only by inserting substantial break time along the way for schedule recovery, which would mean that they don't really flow continuously in the way that the route number and brand would suggest.

4.  Only with a Frequent Network map like Mr. Wright's can you see Melbourne's network in a way that would help you understand it as an instrument of freedom, something that you might use for many purposes as part of am empowered life.  While the State of Victoria has recently taken over public transport information, their published maps still make it very hard to see the network this way.  If you arrive at the website wanting to see a real map of your transit system, and you figure out that you need to click Maps / Metropolitan Maps, you're asked to choose between train, tram, and bus.  Again, the assumption is that you must be looking for a particular transit technology, and that nobody would ever be interested in simply understanding how all public transport — with the technologies working together to form a network — might be useful their lives.

What's more, maps of local buses are chopped up by Local Government Area, arbitrary boundaries that slice up the map in ways that further conceal patterns of usefulness.  And of course, there is no Frequent Network map, like you'll find in Brisbane, and like Mr Wright as sketched above, to help you figure out which services are coming soon and which require you to build your life around them.

So if you know how to get around Melbourne freely and easily all day, bookmark Mr Wright's map.  For now, it's one of Melbourne's most important bits of public transport info.

among the young, decline in driving is not about poverty
seattle reveals its frequent network