If you live in the Portland metro region (Oregon side only), the regional government Metro wants you to be part of an online panel that comments on key issues facing the region.  It's called Opt-in, and you can read about it, and join it, here.

When I tweeted about this yesterday, several people I respect commented that Opt-In sometimes asks wildly distorted and leading questions.  I can now verify that this is the case, based on a survey it asked me to take this morning which includes this appalling question (click to sharpen): 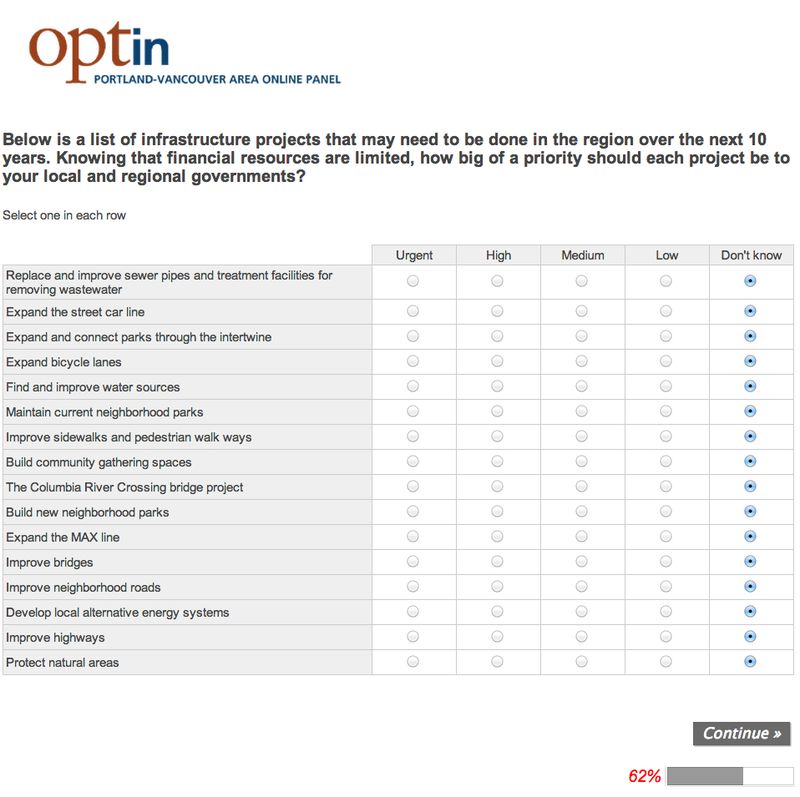 Two choices about transit and they're both about expanding rail.  Bus infrastructure and fleet are not mentioned even though buses are still the dominant mode in Portland and Bus Rapid Transit is a serious option in two rapid transit corridors now under study.   The designer of this question appears to be unfamiliar with Metro's own transit planning process, and is imposing their own biases on the survey.  That may be understandable in the early stages of a tool's develoment, when Metro's leadership may not be paying attention yet, but it should be unacceptable and if the tool thrives, it soon will be.

But is this a reason not to join?  No, it's the opposite.  Biased questions are a reason to use the little text feedback boxes to complain about biased questions, and to contact your Metro councilor if you feel strongly about them.  When Metro councilors will start getting letters about biased questions being asked in Metro's name, the problem will be righted quickly.  Just as boycotting elections is a bad way to get your views represented in government, boycotting survey tools is a bad way to get them to ask better questions!

Like all self-appointed panels, OptIn reaches a distorted sample of the population, but so does the massively inefficient and exhausting ritual that it could someday replace: the public meeting.  (The FAQs gently suggest this long-term prospect, though I'm sure we won't see the end of the public meeting soon.)  Public meetings still have value when they are organized as genuine conversations, such as interactive workshops that I'm often hired to run.  But if the purpose of a public meeting is for you to go and give a speech about why you're right and everyone else is wrong, well, we can all save carbon emissions and time out of our busy lives by doing that at home in our pyjamas.

Need to smash the patriarchy or abolish the government?  I admit online surveys aren't very satisfying if you're massively angry and need something destroyed, and for that your options are still voting, peaceful demonstrations, and if necessary civil disobedience.  But online surveys are a great way to hear from a vast array of voters who are willing to communicate more thoughtfully and with less effort, and who tend to be shouted down or intimidated in public events.  Yes, there are issues about exclusion of low-resource groups and those with language and educational barriers, but Metro's surveys look pretty accessible to anyone with high-school literacy in English and they'd be easy enough to translate and supplement with spoken text.

Metro's currently asking its panel about its priorities for the future of transit in the region, and unlike the survey I mention above, it's a good and worthwhile survey that everyone should complete.

Again, I wish the transit survey had the courage to ask about new funding sources.  The region's transit agency has cut over 15% of its service in the last decade, and is in ongong budget difficulty due to unfunded health and pension commitments made in wealthier times.  While it may gradually restore a basic functional network, it is nowhere close to offering the pace of service growth that would support the region's land use vision or its justify its green reputation.  But the questions the survey does ask, about your priorites for deploying what resources can be found, are mostly clear and reflect the realities of transit's geometry and costs.

If you don't enjoy public meetings, or have better things to do with your time, join Opt In, and if you're not in the Portland region, encourage your regional government to emulate it.  And if you find a biased question, comment about it!

the mobile battery problem solved, in 1908! (quote of the week)
in the pacific northwest, the romantic drama is on the bus …

7 Responses to portland: “opt-in” to comment on the future, despite biased questions!

You are here: Home › portland: “opt-in” to comment on the future, despite biased questions!