This really is too much fun.  From a scholarly study of the Craiglist "Missed Connections" section, where people express a romantic interest in someone that they saw out in the world.  You know, ads like this:

We were both on the max [light rail]–me heading to the Blazer's game and you on your bike. You overheard part of my conversation with my friend and were quite amused. I wanted to talk to you but then got pushed back by other riders. Email me if you remember that conversation and would like to grab a drink sometime.

So here, by state, is the location most often cited in "Missed Connections" ads (click to sharpen): 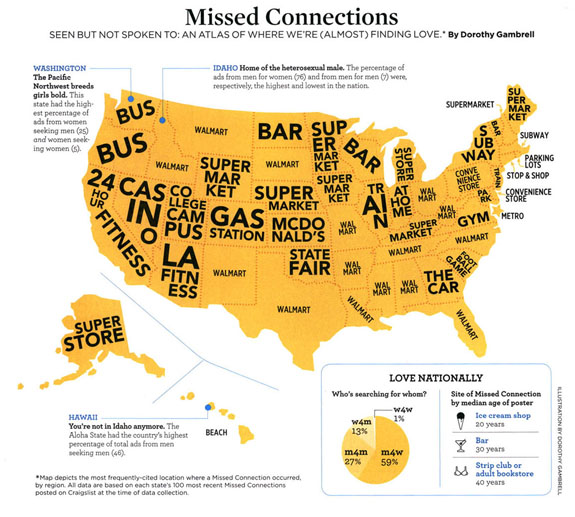 In rail-rich older urban areas, it's rail transit, of course, the subway or train or metro.  But in relatively rail-poor parts of the country, only Oregon and Washington find so much wistful romantic drama on public transit!  This is one of those slightly twisted points of "Portlandia"-style pride that makes me proud to be an Oregonian transit planner.

portland: “opt-in” to comment on the future, despite biased questions!
what if a city wants more transit than its neighbors, but they’re all in one transit agency?

8 Responses to in the pacific northwest, the romantic drama is on the bus …

You are here: Home › in the pacific northwest, the romantic drama is on the bus …