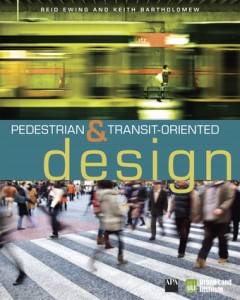 This is not a balanced book review. While I will start with some general praise of this new book, I must focus on a few passages about public transit that are both misleading and potentially harmful.  I do this not to challenge these authors in particular, but because these mistakes are so common in urbanist writing and need to be called out wherever they appear.

Reid Ewing and Keith Bartholomew, both at the University of Utah, have a new large-format paperback offering a concise overview of the basics on Pedestrian and Transit-Oriented design.  If you want a good glossary of key urbanist concepts such as imageability and coherence, or you want a good and well-cited argument for local street connectivity, this is your book.

Very usefully, the book is organized as a series of checklists:  Here are the features that you must have to be considered transit-oriented design, here are others that are desirable.  It's designed to be handy to the time-crunched developer or policy person.  In fact, it meets one of the most important standards for an influential book in our distracted age:  You can get most of the message by just looking at the pictures and reading the section headings.

The writing is good, too, clear and with careful attention to explaining and demystefying concepts.  With one exception, I could recommend this as a good reference guide to the key concepts of pedestrian-oriented design.

As a guide to transit-oriented design, however, it has a fatal flaw:  The authors make recommendations about transit that make sense from a design and development point of view but are nonsense to many experienced transit planners.  These recommendations will sound elitist and tone-deaf if you present them to your transit agency.  As always, I emphasize sound; I've talked with enough urbanist writers to know how good their intentions are; they are mostly genuinely surprised when their comments about transit backfire.  But it's not a hard mistake to avoid.  I am going to take apart a critical passage in the book not because it's typical — it's an unusual flaw in a good book — but because it illustrates a lingering problem with urbanist discussions of transit in general, one that I hope we are close to moving beyond.

Ewing and Bartholomew lead off their transit discussion with this tired old chestnut:

In the quest for efficiency, transit has become dull and utilitarian, part of the problem reather than the solution to today's lifeless streetscapes (Coppe 1991).  [p 82]

If this generalization is really about "today," then how is it bolstered by a 22-year old citation?  Obviously it's true to a degree, more in some cities than others,  but there has been transformative progress in the last two decades.  Fleet, facilities, and technology have been upgraded across the developed world, often with the input of great designers.  Do transit agencies get no credit for the evolution in the comfort, openness and access that have happened over the last generation?

More fundamentally, this line conveys disinterest of the  nature of transit's success, a disinterest that is tragically common in urbanist professions.  The word efficiency is used as though all readers would agree it's a misguided goal.  But when working under any fixed budget as transit agencies do, efficiency is the same thing as abundance.  (When something called efficiency is genuinely destructive or unsustainable, it should be called false efficiency.  Freeways, fracking, and industrial farming may be less efficient than they look because of externalized negative impacts.  Questioning those things doesn't amount to questioning efficiency.)

As for the word utilitarian, it has a technical meaning in philosophy but here it's a dismissive word meaning useful.  Anything that scales to a vast network that's potentially useful to thousands or millions of people can be called utilitarian.  Great transit agencies wear this term as a badge of honor.  What's more they prove that usefulness is beautiful.

But the authors dig themselves deeper.  After showing us pictures of charming, distinctive bus shelters in two wealthy communities that can afford them, they write:

In some cases, transit operators might do better by putting fewer buses on the street at times of low demand, and diverting the money they save into bus stop amenities and fleet facelifts.

This book appears at a time when many US transit agencies have been slashing transit service for the last five years, driving away legions of riders.  Portland, for example, has had its inner city grid network gutted — mostly cut to 20 minute frequencies at which the connections on which it relies are almost impossible — even though frequent transit service is a foundational element in the City of Portland's neighborhood development policies.

Any "low-ridership" services that have survived all that carnage are serving popular and important non-ridership goals.  They are not going to be cut to build nicer bus shelters.  Doing so could also be illegal in the US if you're using Federal funds: US Title VI legislation (part of the 1964 Civil Rights Act) is designed to prevent exactly this kind of upward redistribution of the benefits resulting from public investment.  All US transit agencies that receive Federal funds must do extensive analysis to prove they are treating low-income and minority riders fairly in both service and infrastructure.

So if you follow this book's advice, and tell your transit agency they should cut service and force lower income riders to buy cars so you can pay for  nicer bus shelters, it doesn't matter how noble your intentions are.  You will sound elitist.  You will sound especially hostile to the burgeoning environmental justice agenda that is already embodied in civil rights legislation, and that has its own strong nexus with the ultimate outcomes that we call sustainability.  If you prevail in guiding the policy of your transit agency, that agency could be exposed to civil rights lawsuits as a result.  Do you really want this many enemies?

It doesn't help that in suggesting service cuts at "times [rather than places] of low demand," the authors are just repeating a common misconception.  Ridership at different times of day is interdependent, if only for the obvious reason that most transit trips are round trips.  If you cut service and thus reject a customer at one time of day, you'll likely lose their business in the other direction as well.  The most obvious "time of low demand," the late evening, is also a "guaranteed ride home," which means it affects the overall attractiveness of the product.  Finally, lower-income riders who form the bedrock on which transit grows are especially likely to be travelling in the evening; cut their service, force them to spend their scarce money on cars, and you've shoved them further into poverty.

A consistent pattern of all-day service (including "times of low demand") is a powerful tool for fostering lower vehicle ownership.  That's is why many transit agencies are now committing to a policy "Frequent Network" that guarantees service over a certain span regardless of trip-by-trip ridership.  (These policies, important in guiding true Transit-oriented Development at regionwide scale, deserved a mention.  Policies in the Portland and Vancouver BC regions could both have been cited.  Indeed, the book is silent on the urgent question of how to recognize a suitable site for TOD.)

I love distinctive transit shelters as much as anyone, but not if they are defined as an alternative to the sheer quantities of service that cities need and that ridership would reward.  (Canadian midsized cities, for example, generally have about twice the ridership per capita of similar US cities, not becuase their shelters are cuter but becuase they run about twice as much service per capita.)

Distinctive, adorable shelters can still come about in one of three entirely reasonable ways.  Either:

Developer-funding (also endorsed in the book) is often the purest nexus of all, but city funding is also a healthy trend.  City governments are much better placed than regional transit agencies to make investments that express civic identity and character.  Most US cities can also do improvement districts that focus the cost on the landowners who will most benefit.  Still, it's usually wealthier communities that can afford to do this, so it's deeply misleading to present these specialized shelters as realistic examples for cities in general, let alone to suggest that cash-strapped agencies should reject existing riders in order to pay for them.

It's hard to even criticize Ewing and Bartholomew for these howlers.  As long as I've been in the business, I've heard leading urbanists lecturing transit planners about how they should abandon their obsession with abundant service and focus on aesthetics instead.  As someone with serious credentials in the arts, my response is always that I understand the aesthetic values that the urbanist is describing, but that their recommendation is pointless until they own the consequences of the cuts they are implicitly proposing to fund these things.

To be fair, transit agencies have been slow to engage urbanists in their own language, which requires staff with appropriate expertise.  This, however, has improved dramatically over the last decade.  Most leading transit agencies in major US cities have design and land use professionals on staff.  Working urban designers and architects are responding constructively to transit agency input, and respectful conversations between the fields are happening more than ever.  Most urban design and architecture professonals that I deal with are sensitive to real-world transit issues and open to learning about transit agency perspectives, so we can hope for a continued spread of insight on these issues.

Indeed, Ewing's and Bartholomew's book shows how far the urbanist discourse has come in respecting transit and the diversity of its riders.  They speak mostly of "transit," avoiding rail vs. bus arguments, and their photos show buses as accepted parts of the urban landscape deserving of attention.   This is real progress, still controversial in some quarters.  It was partly in the context of this larger sensitivity that the passages quoted above were so shocking.

In the long run, urbanist thinkers who discuss transit must learn to respect transit network design and policy as a genuine expertise — something that's worth learning about before you comment on it.  Again, my own experience suggests that the practice is ahead of the literature in this regard.  This book — very useful on all subjects except transit policy — shows how far urbanists' respect for transit agencies has come since the early days of the New Urbanism, and how much — or perhaps how little — remains to be done.

21 Responses to how to (not) sound elitist when discussing transit

You are here: Home › how to (not) sound elitist when discussing transit