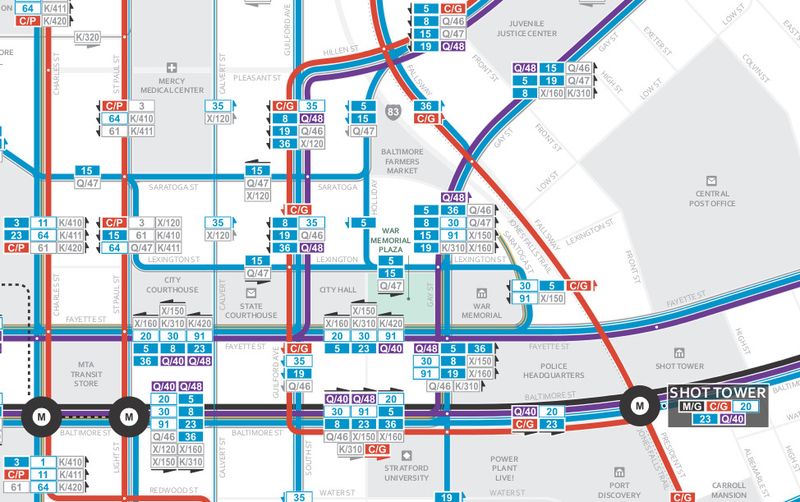 You can see the full size version here. This map uses color to differentiate between linear and loop routes, and line weight to denote frequency. Compare this to MTA's current system map, showing the same part of the city: 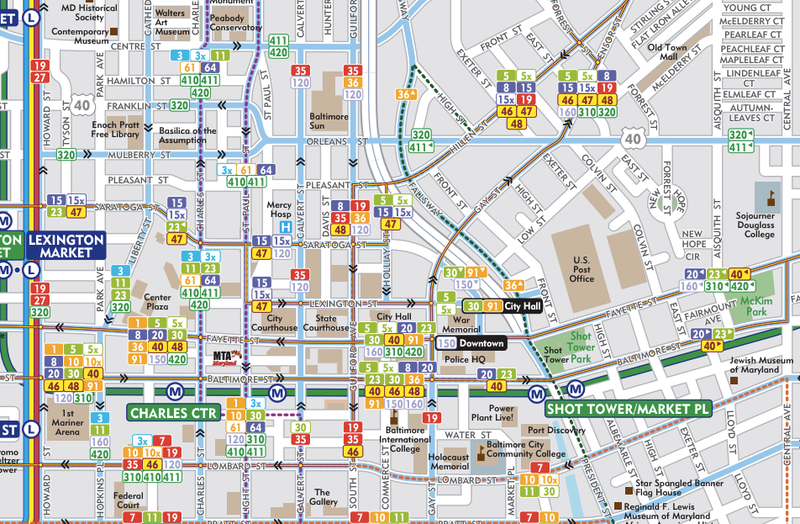 MTA's map uses a variety of colors to depict individual routes, but without assigning them significant qualities (though green and blue appear to be reserved for different kinds of commuter expresses). The seemingly arbitrary assignment of colors to local routes creates a cluttered, confusing visual effect, and obscures the quality of service provided by each route.

On the other hand, Marc's map distinguishes which routes on which roads provide which level of service, using a simple 5-color scheme differentiating linear and circulator routes, rail, rapid bus, and ferries.  Frequent service is clear as a dark wide line, with its color indicating technology.  This visualization is very information-rich,  offers a clear improvement to the MTA map in its utility as a description of the service available to MTA riders.The image below is a snapshot of the legend from this map:

The radial nature of the network is also why I decided to group services into a limited color palette, like the WMATA map. Originally I intended to assign each route its own color, as in the Leeds or Portland maps, but so many routes crowded together in so many areas as they headed downtown that it was difficult to fit the whole "spectrum" on certain streets/corridors. (I think this is why even the MTA regional map, which does use a wider color range, still has to resort to using a single line for all buses in central Balto.) If the network was more emphatically organized on a grid, as you advocate, assigning individual route colors would be a lot easier since the map wouldn't have to display as many redundancies. 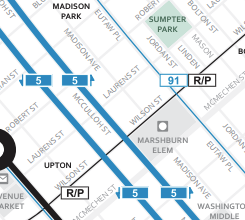 In the image at left, for example, the visual prominence of the blue lines for Route 5 clearly communicate its higher level of service, compared to Route 91 several blocks north. The directional arrows attached to the route labels are also a nice, unobtrusive touch; transit maps can often become unecessarily cluttered with these symbols, particularly in systems with many looping routes.  Marc's map does a nice job of providing this necessary information at a relatively low level in the visual hierarchy.

Intelligently designed maps like this one show opportunities for connection, and the relative importance and usefulness of the system's transit routes These maps work by exposing the degree of freedom of mobility available to a transit rider.

yes, great bus service can stimulate development!
what does a bus driver look like?