Step out into most developing world cities, and you’ll see something like this: Lots of vans sitting around, looking like maybe they’re about to go somewhere useful.  Vague cardboard signs in the windows suggest they may or may not be public transit of some kind.

They’re called matatus in Kenya, colectivos in Latin America.  Over much of the world these informal, private, for-profit vans, run at low cost for low fares in areas of high demand, forming the basic public transit for a city.  Generally they run along a particular route out of a hub like the one above, but sometimes it’s possible to vary the route depending on what you can negotiate with the driver.  You can count on them to hit key locations but not necessarily the exact path they’ll take.  You also can’t be sure of when they’ll go.  Sometimes they wait until they’re full before leaving.

Today in Atlantic Cities Emily Badger tells the story of the Digital Matatus project, an attempt to map and describe the spontaneously evolved patterns that these semi-fixed-route buses operate.  Although nobody planned this network, it’s more orderly than you’d guess.  Download the sharp, complete map here. 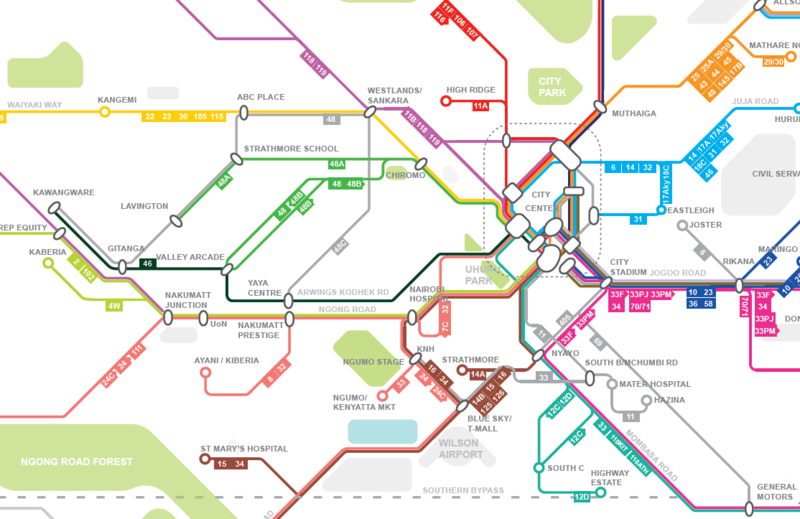 What do I notice?  Practically everything goes downtown!

Matatus have organized themselves into routes because that’s to their benefit; they train customers where to wait for them along reasonable paths so that they aren’t driving around looking for customers individually.  The idea of the route — and of an efficient, non-duplicative spacing between routes — arises spontaneously from the economics of the product.

But they almost all converge on downtown, creating huge jams there.  Nairobi is clearly big enough to  have large flows of people crosstown to many non-downtown destinations, suggesting that a more efficient and liberating network would have more grid elements.  This is a common thing that goes wrong in privately evolved systems.  Every matatu wants to go downtown because it’s the biggest market, and a mutatu driver doesn’t have to be coordinated with anyone else to fill a bus going to and from there.  This geometry problem bedevils privately routed and scheduled operations everywhere.

Crosstown service, by contrast, requires frequency on a single path connecting several major dots, and it has to leave from organized non-downtown hubs where many other services connect to it.   That requires more organization, so it’s less likely to arise spontaneously out of private operators optimizing for themselves.

So you get a single market overserved and other markets underserved.  This is very much like the way a narrowly-focused transit agency will throw too much service at a single market rather than building a network useful for many markets.  It takes more planning and management to create a network, and this usually requires a government willing to impose order.

This same problem was observable after the wholesale privatization of buses in Britain.  Suddenly there was lots of duplication of bus service into the biggest downtowns as everyone chased the easiest prize, but service disappeared from crosstown markets that could have done well, but that required a network of organized connections to succeed.  That network is what privately motivated transit has trouble delivering, because it usually requires cooperating with people who are perceived as competitors.

Now and then, these systems get reorganized by government into more logical routes that spread the network across the city for easier everywhere-everywhere travel, as happened in Santiago in 2007.   The transition is hell, but when you’re finished, you have a network that’s much easier to use to go all over the city, and a much smaller knot of buses downtown.

The moral?  Disorganized transit systems “planned” by the actions of many private actors do naturally evolve certain forms of efficiency, but they do not naturally evolve into the most efficient and productive network for the whole city.  That final push into coherence requires network design!

new york:a frequent network map
could dead houseplants save the world? (quote of the week)

17 Responses to the evolution of logic in privately planned transit

You are here: Home › the evolution of logic in privately planned transit