The reputation of Portland as a transit city in the last two decades may have been about its light rail, streetcar, or aerial tram, but to the extent that the city achieved significant ridership and made transit a welcomed part of urban life, it's done so with a grid of frequent transit services.

This grid consisted of both rail and bus services, but it's the frequent grid pattern, not the technology, that made it easy to get around the city, in ways you could measure with trip planning software.  For example, the amount of the city you can get to quickly from the inner-city Hollywood district arises mostly from frequent grid connections , as from the light rail line there. 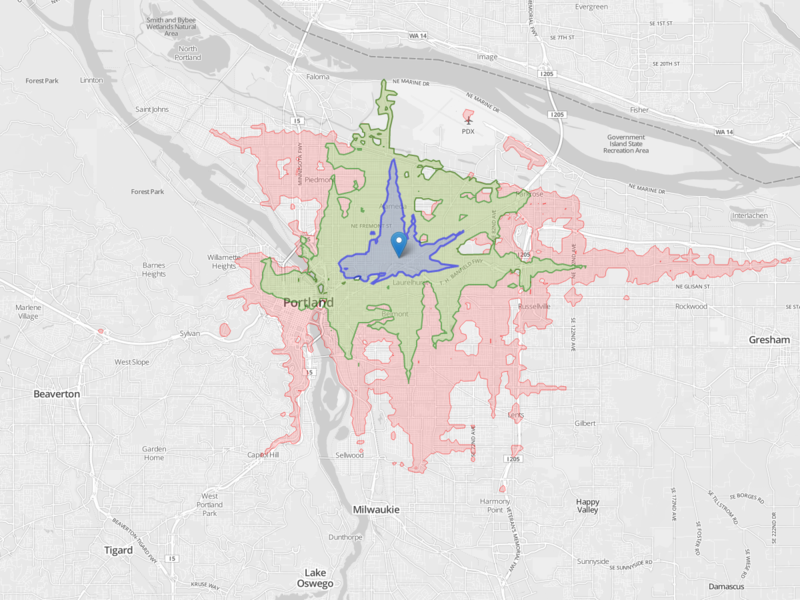 [Graphic by Conveyal showing travel times on transit+walking from Hollywood light rail station.  Blue is 15 min, green is 30, pink is 45.]

Back in 2012, this post celebrating the 30th birthday of the high-frequency grid ended with a serious caveat:

Purists might argue that the grid never made it to its 30th birthday, but rather perished at  age 27 in 2009.  That was the year that TriMet cut all-day frequencies below the 15-minute threshhold that is widely accepted as the definition of "frequent enough that you can use it spontaneously, without building your life around the timetable."  Since the grid relies on easy connections to achieve its goal of easy anywhere-to-anywhere access, the 2009 cuts began to undermine the whole idea of the grid. TriMet avoided doing this in its first round of cutting after the crash, but felt it had no alternative in the second 2009 round.

Will the grid ever be restored to its necessary frequency?  Will it ever be expanded and enriched (as regional land use planning generally assumes it must be) with even better frequencies?  Not everyone in Portland thinks this is a priority, so you might want to express your view.

Earlier this month, TriMet answered that question by restoring 15 minute service to 10 critical bus routes, in addition to the two routes which maintained that standard through the recession and recovery. During the period of this service cut, as good connections enabled by the frequent grid became more arduous and wait times increased, the overall utility of the system across its strongest market was diminished. The impact on ridership was clear: between fall 2012 and fall 2013 alone, weekday bus ridership declined 3.6 percent, 2.6 on the MAX light rail system, continuing the negative trend starting from 2009.

The return of the grid is good news for riders, and no doubt the agency hopes to reverse the troubling ridership trend and create some good publicity in the processs. High frequency transit service is a key characteristic of many of Portland's most attractive neighborhoods, and must be seen as a permanent element of these places if they are to continue to grow in a manner that enables people to make real choices about their travel options.

More importantly, the return of the grid is good for anyone who wants Portland to be a denser, more walkable, more sustainable city.  Portland policy allows lower minimum parking requirements for dense housing located along the frequent network, and those low requirements help make such development viable as an alternative to sprawl.  Last year, though, there was an eruption of controversy around these requirements in one inner neighborhood, and one of the legitimate objections was that the full span of frequency (7 days including evenings, as you need for a liberated life on transit) had been cut in 2009.

The fall and rise of Portland's frequent grid shows the perils to actual freedom of access that arise when buses aren't respected for their essential role, and when nobody steps up in an economic crisis to save a crucial building block of the city's redevelopment policy.  Portland's 2009 frequency cuts drove away a lot of transit riders.  Please spread the word that they are welcome back.

darwin: what we’re up to here
my australian interviews

3 Responses to portland: the high-frequency grid is back!

You are here: Home › portland: the high-frequency grid is back!