Yesterday, Houston Metro began seeking public comment on what may be most transformative transit plan in its history.  I'm honored to have been a part of it, as the network design lead* on the consulting team.  Read all about it, in as much detail as you want, here.  Explore the detailed map here.  Note that the pulldown menus in the black bar lead to lots of cool maps and diagrams, as well as extensive data about the plan.

The plan shows that without increasing operating cost, Houston's frequent network — the network of services where the bus or train is always coming when you need it — could grow from this … 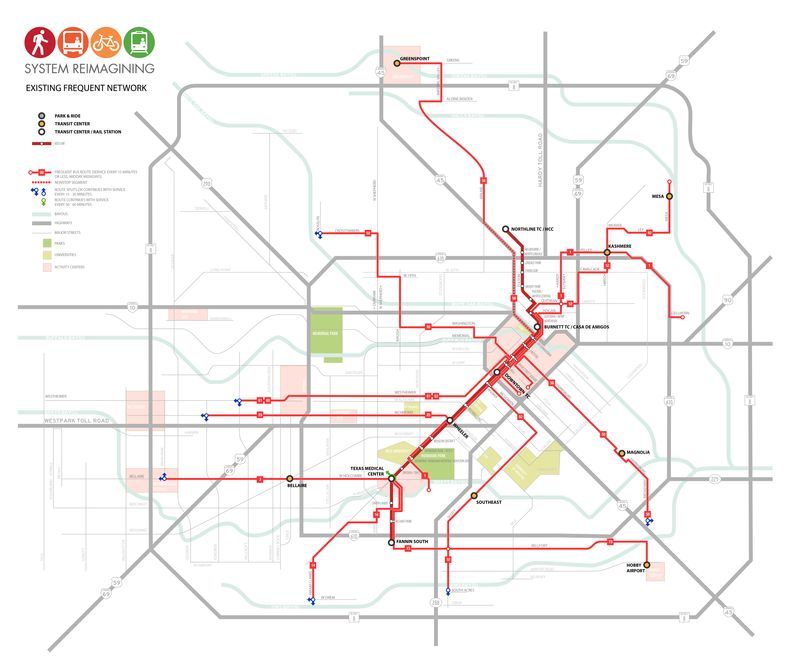 This cool page toggles between the two, so you can see the system growing.

How on earth could we grow a network that much without new money?  There are two answers:

1.  That's how much waste there was in the existing system.  Waste in the form of duplicative routes, and due to slow meandering routes created due to a few people's demands.

2.  Hard choices are proposed about expensive service to very small numbers of people.  The plan devotes 80% of Metro's resources to maximizing ridership, which all of these frequent lines do, and only 20% to providing access to people living in expensive to serve places.  Currently only about 50-60% of resources are devoted to services where high ridership is a likely outcome.   (See here for my paper on this analysis method.)   This shift in focus will have negative impacts on small numbers of riders who rely on those services, but these were small numbers indeed .  (About 0.5% of existing riders end up over 1/4 mile of service, and most of them are just over that threshold.  Often, their longer walk is to a better service, a tradeoff that most people are willing to make in practice.)

The exciting thing is not just the massive growth in frequent services proposed, evident above, but the shape that they'll take.  The core idea of the new network is the high-frequency grid, designed to enable anywhere to anywhere travel with a single fast connection.  Everywhere on the proposed network of red lines, that kind of easy access will be possible.

Obviously, too, the whole geographic focus of the network had to shift.  Houston is one of the biggest US cities that still has a radically downtown-oriented transit network despite decades of decentralization.   The core area where the existing network converges has only 25% of the region's jobs, and while transit must favor the jobs that are in dense and walkable settings, there are now many highrise clusters around Houston that answer to this description to some degree.

Houston has been growing mostly westward and northward in the last few decades.  Its densest residential neighborhood, for example, is Gulfton, located 7 miles west of downtown.  Not far from there is its second-densent employment and activity center, Uptown-Galleria.  Houston is a constellation of centers, and the transit network needs to be more decentralized to effectively service all of those centers where the density and walkability make transit viable.  The high-frequency grid, shown above, reaches all of those places.

Houston also features a fascinating patchwork of incomes.  There are rich and poor neighborhoods but there's no longrer a rich or poor side of town.  That means that low-income people, too, will find the whole network useful.  We have done our best to retain useful service on the historically low-income and minority eastside, despite declining population in some areas.  The key strategy there was the anchor most services to the main universities in that area (University of Houston and Texas Southern U.) which are the surest drivers of all-day demand.

The huge no-cost expansion of useful service may remind you of a plan I worked on two years ago for Auckland, New Zealand, where it was also possible to massively expand the frequent network by redeploying duplicative services.   Not all  transit agencies have this much waste, so your city's mileage may vary.  But if you suspect that transit could be doing more in your city, read all about the Houston plan.  You'll be amazed, as we were, about how much is sometimes possible.

Finally, if you're in the Houston Metro service area, remember to submit a comment even about things you like.  Sadly, most of the public comments received on transit plans are negative even if the plan is broadly popular, becuase people who like it falsely assume it will happen anyway.   This plan will not be implemented if it does not attract strong support.   We welcome constructive comments about the plan, which will be used to make the final plan even better.  But if you like the plan, it's important to say that as well!  Instructions for how to comment are here.

* This term means I led the design workshop that developed the design, but it does not mean I get all the credit.  These plans are collaborations among many players, both on our large consulting team and of course at Houston METRO.  The team was headed by TEI of Houston — Geoff Carleton was the excellent project manager — and included Carol Lewis, Nancy Edmondson, Dan Boyle, and Asakura Robinson.  Kurt Lurhsen, METRO's head of planning, shepherded the project internally with the support of a great teams.  The plan would also not have gotten to this stage without the preliminary support of METRO's Board, including Chair Gilbert Garcia and Strategic Planning Committee Chair Christof Spieler.  Spieler has been an especially tireless advocate of this project from its earliest days.  All of these people and organizations contributed substantially to the plan as it appears.

a job for a senior transit info designer
looking for structure: the metro maps of Jug Cerovic