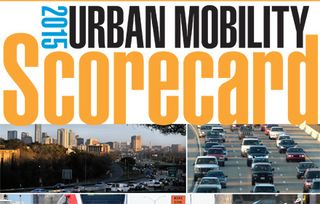 Every year, the Texas Transportation Institute’s Urban Mobility Scorecard describes the nation’s most transit-intensive and walkable metro areas as having terrible “urban mobility”.  And every year, academic experts and smart journalists attack its indefensible methods and assumptions.  And yet, every year, careless journalists describe the report as though it were news about the state of "mobility" or “commuting” in America.

But you don’t need to study the analysis to understand what’s wrong with TTI's claims.  All you need to do is look at their press release or summary, and notice that they want you to think of car congestion as equivalent to poor urban mobility.

When you use words with different meanings as though they were interchangeable, you are denying the existence or relevance of people who are included in one meaning but not the other.

Political rhetoric plays this trick all the time.  When scientific or academic rhetoric uses it, you should be suspicious.  It's one of several types of rhetorical annihilation.

In this case, the people being erased are anyone who moves about in cities (urban mobility) but does not experience congestion.  These include anyone who organized their lives so that they can walk to work, and of course anyone who cycles or uses public transit– at least those transit services that are protected from congestion such as most heavy rail, light rail, and busway services.   (And in fact, the report itself is interested only in the travel time of “auto commuters,” so all transit riders are excluded.)

If you are one of these people, you do not count as part of your city when the TTI tallies your city’s “urban mobility."  Any subsequent commentary about the economic impact of “urban mobility” problems refers to an economy in which you do not exist.

This has been pointed out to TTI many times, including four years ago at a CNU conference workshop I attended.  Many of us said then that if TTI wanted to write reports about car congestion, an  appropriate name would be Urban Car Congestion Scorecard, not Urban Mobility Scorecard.  They have had ample opportunity to rename their report to describe what it really is, the, so we can only assume that the confusion they are sowing is intentional.

Meanwhile, when you hear two different terms being used interchangeably, stop and ask: “Who is in one of these categories but not the other?”  Because those are the people the writer doesn’t want you to notice, even if you’re one of them.

(Yet another reason to hire literature students!)

Does the Ridership-Coverage Question Apply to Bikes?
Can Design Learn from the New Zealand Flag Debate?