The Seattle region’s rapidly growing rail transit system crosses a major milestone today  The segment between downtown and the University of Washington, via a station in t 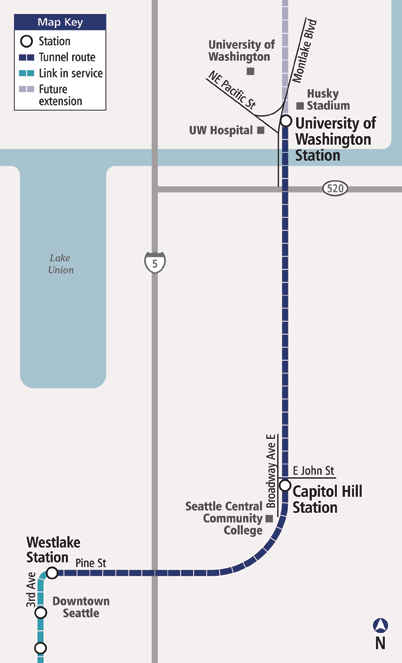 he dense Capitol Hill neighborhood, opens today.  And if you vaguely associate Seattle with vast delays and cost overruns on tunneling projects, give Sound Transit credit:  This one is 6 months early and $150m under budget.

However far the region’s rail transit network expands, this will probably always be its busiest segment.  It’s not just that the link between a robust downtown and a major university is the biggest transit market in many comparable cities.    It’s also that a good 40% of the region — northeast Seattle, all the northern suburbs and some eastern ones — will eventually end up on trains through this segment to get downtown.

This year will be another milestone for Sound Transit: the 20th anniversary of the passage of its first ballot measure, which funded the now-existing line between the airport and downtown.  Through its next successful measure, Sound Transit 2 (ST 2) in 2008, the agency is now funded for long extensions north to Lynnwood and east through Bellevue to Redmond.  Meanwhile, they are starting a lively public discussion about the next ballot measure, ST 3, which will probably include an additional rail transit line in Seattle as well as several possible suburban extensions.  City of Seattle voters last year also passed Move Seattle, a measure that among other things greatly expands bus service in the city.  All in all, a great year for one of America’s most ambitious transit cities.

Ready to Go — Without a Driver’s License
Perils of Transit Journalism I: Don’t Let Trendlines Confuse You

22 Responses to Seattle: Your Rapid Transit System Now Has a Core!

You are here: Home › Seattle: Your Rapid Transit System Now Has a Core!