One of our recent projects was a major redesign for the bus system in Silicon Valley, more exactly Santa Clara County, in California.  The plan has been approved by the Board of Directors of the transit agency, VTA, but is stuck waiting for the BART rapid transit extension around which it was designed.

Still, the agency is moving ahead with the most critical step: getting rid of the fare penalties for getting off of one bus or train and onto another.  (This act is commonly called transferring, although I recommend calling it connecting.)  These penalties are common, but they are also insane.  Connecting from one transit vehicle to another is exactly what customers need to do in a maximally efficient network that gets the most people to the most places fastest.  Connections, in short, are what combines a pile of lines into a network.  It is insane to make customers pay extra to do the thing that uses your resource most efficiently.

The new network is a high-frequency grid system — and so, to some degree, is the existing one.  Here’s the new network, with frequent lines in black, red and orange.   (Download sharper version here.) 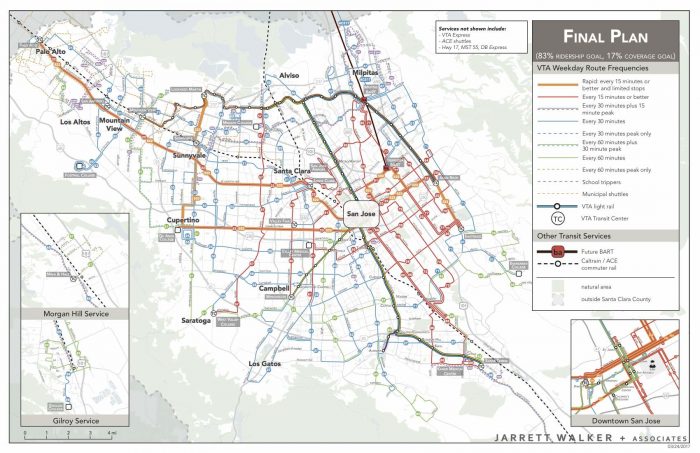 Wherever red lines cross, you can “turn” by changing from one transit line to the other, and because of the high frequency, the next bus or train will be along soon.  Imagine what driving would be like if there were special surcharges for turning!

To eliminate these penalties, of course, is to lose some revenue, at least initially.  So you usually have to raise the base cash fare to compensate, which sets off all kinds of alarms about “raising fares.”  VTA is raising its base fare only modestly, from $2.00 to $2.25.

But really, this shouldn’t be called raising the fare at all, because it is vastly increasing what the fare buys.  Instead of buying service only along the line you happen to be on, the new fare buys access all over the city and county.  Yes, some people who’ve built their lives around a single transit line will complain, but in such a decentralized county, with so many destinations throughout, it’s only a matter of luck if your home and destination are on the same line.  To really get places, you need connections.

Learning from Portland’s “For Rent” Signs
Chattanooga and NW Arkansas: Speaking Next Week