Last spring, Jarrett Walker + Associates was contracted by IndyGo, the transit agency serving Indianapolis and Marion County, to lead an update of their last Comprehensive Operation Assessment. This project involves consideration of the design, performance and mobility outcomes of IndyGo's existing network, followed by an extensive public engagement and redesign process. Next week, we will be on the ground in Indianapolis for a series of meetings, asking stakeholders and members of the public to share their views on the future of the network, including one very fundamental question: to what degree should IndyGo pursue each of the competing goals of high ridership and high coverage?

As always, one of our first steps was to draw a map showing IndyGo's midday route frequencies. To the agency's credit, it already incorporates frequency into its general purpose map (along with a lot of other useful information). 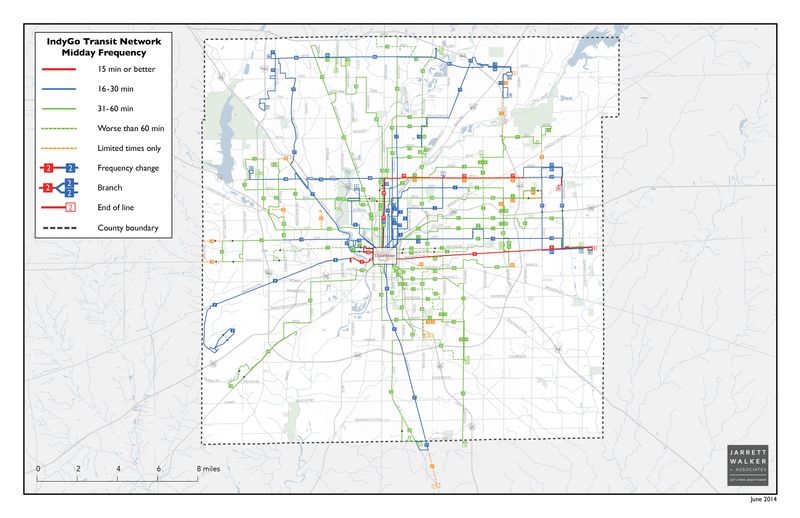 Next week, IndyGo and JWA will be hosting three meetings to discuss the future of the network at The Hall, 202 N. Alabama Street:

We'll be discussing immediate changes to the network responding to the 2015 opening of the new Downtown Transit Center, as well as long term priorities and plans for future rapid transit lines. For more information, and to take a survey on these questions, head on over to IndyGo's site for the events: http://www.indygo.net/news-initiatives/indygoforward. 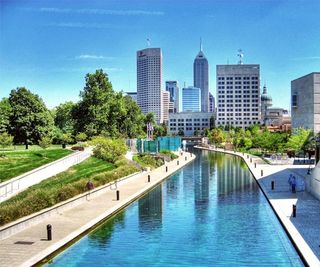 I'm just home from Indianapolis, where our firm is beginning work on something called a Comprehensive Operational Analysis (COA) update.  The project is shaping up to be an important step in the transit vision for the city.

Many parts of Indianapolis are seeing  a remarkable revitalization.  Dense housing is growing fast in and around the walkable downtown core, galvanized by public works like the Cultural Trail and a strong base of downtown parks, monuments,  state government, universities, and cultural institutions.  There are even canals lined with housing, much like the Dutch might build.

Many neighborhoods are also vibrant and growing.  The northern suburbs include Carmel, famous not just as the "Roundabout Capital of the US" but also for a very strong walkable downtown.  Carmel is the sort of massive suburban transformation that is common in the west coast and northeast but still unusual — in its sheer scale — in midwest metros of Indy's size.  The critical mass around walkable urban development  is clearly developing fast in and around Indy, making it an important city to watch especially for its midwestern peers.

Sometime in the next couple of years, voters will be asked whether they want to make a commitment to improved transit service.  That vision, called IndyConnect, includes a series of Bus Rapid Transit corridors but not much detail on how the total network would work.  Our study (for the regional planning agency, Indianapolis MPO, as well as the transit agency IndyGo) will help build a clear and costed set of scenarios for how the total transit network could improve, extending the benefits of the rapid transit element well beyond the specific corridors it serves and telling a story about benefits to the entire metro area.  (We also have a practical short term task, which is to figure out how to rearrange bus routes downtown to work with a new transit center opening next year.)

There will be plenty of opportunities for public comment over the next six months as the planning process proceeds.  We look forward to lots of great conversations about this exciting and fast-changing city.

You are here: Home › Indianapolis