On a recent post, commenter Pantheon laid out the core idea that explains why I cannot be a full-time rail booster, even though I love riding trains as much as anyone:

The problem can be posed in the abstract in the following way. Let’s
say we have a city with 20 neighbourhoods, A-T. Our city has a big
deficit in transit infrastructure, and limited resources for redressing
it. We have X dollars to build infrastructure, which is enough to do
one of the following things:

3. Busway network with ROW on city streets and traffic
priortization, a huge improvement over what exists currently, but with
some compromises and thus not a ‘perfect’ system that emulates rail.
Nonetheless, serves all neighbourhoods A-T.

I don’t know if my assumptions on the financials are perfectly
accurate, so feel free to correct them. But as you can see, this is
really a political question. What represents the most just approach for
the citizens of our city? Is it fair to ask the residents of
neighbourhoods G-T to make due without transit so we can build a
premium rail network in A-F? And what about the poor residents in
neighbourhoods M-T? They don’t get any transit unless we go with the
cheapest option.

(UPDATE:  Important clarification thanks to commenter Des:  Let’s assume that all these neighborhoods, A-T, are more or less equally deserving of transit in terms of their density and demographics and development potential.  We’re not talking about a case where neighborhoods M-T aren’t dense enough to justify service.  We’re talking about a case where they are, but where a high-end technology choice means we can only serve a few neighborhoods any time soon, and they’re last in the queue only because somebody has to be.)

This isn’t a hypothetical, of course.  In fact, it’s a pretty good scheme for understanding the last two decades of transit development in North America.  Like so many American stories, the most vivid, Technicolor example happened in Los Angeles.

For most of the 1980s and 1990s, Los Angeles was pursuing Pantheon’s method #1:  Huge investments in a few high-quality rail lines.  I recall vividly the debates in the press around 1983-85 about the emerging heavy-rail subway project that eventually became the Red Line.  A key idea in the discourse was:  “Los Angeles is a world class city, every bit as wonderful in our own way as Paris or London.  And world class cities have subways.”  A strong driving sentiment was that Los Angeles needed not just rail, but the model of rail being modelled by London and Paris, the underground third-rail metro.

To be fair, it was never that clear-cut.  Two light rail lines also opened in the 1990s, the Blue Line to Long Beach and the peculiar Green Line in the median of the Century Freeway, which some would argue was really about getting the freeway built.  But rail was definitely the focus, and for the densest part of the city, the plan was for underground rail transit.  There was no major investment in bus infrastructure in this period.  The El Monte Transitway already existed, but it dates from the 1970s.

Because underground rapid transit is so expensive, they could only build it very slowly, so a only a few neighborhoods were going to be benefit in the early years.  That was the key tradeoff.

(When people in young New World cities ask why we can’t build rapid transit as fast and cheaply as Paris or New York did a century ago, I remind them that a century ago there were no environmental laws and labor was treated like dirt.  That made construction orders of magnitude cheaper than it is now.)

Then came the Bus Riders Union, representing some the vast range of neighborhoods that weren’t going to get rail for decades under the plan, and the consent decree that required MTA to give more attention to the bus network.  This was followed by the revolt against underground rail in 1998, right as the Red Line was opening.

So focus shifted to cheaper things that could be done on the surface, and that could therefore cover more neighborhoods with the same dollars.  Since then, we’ve seen an explosion in the diversity of transit modes, including not just light rail but also three different degrees of Bus Rapid Transit: 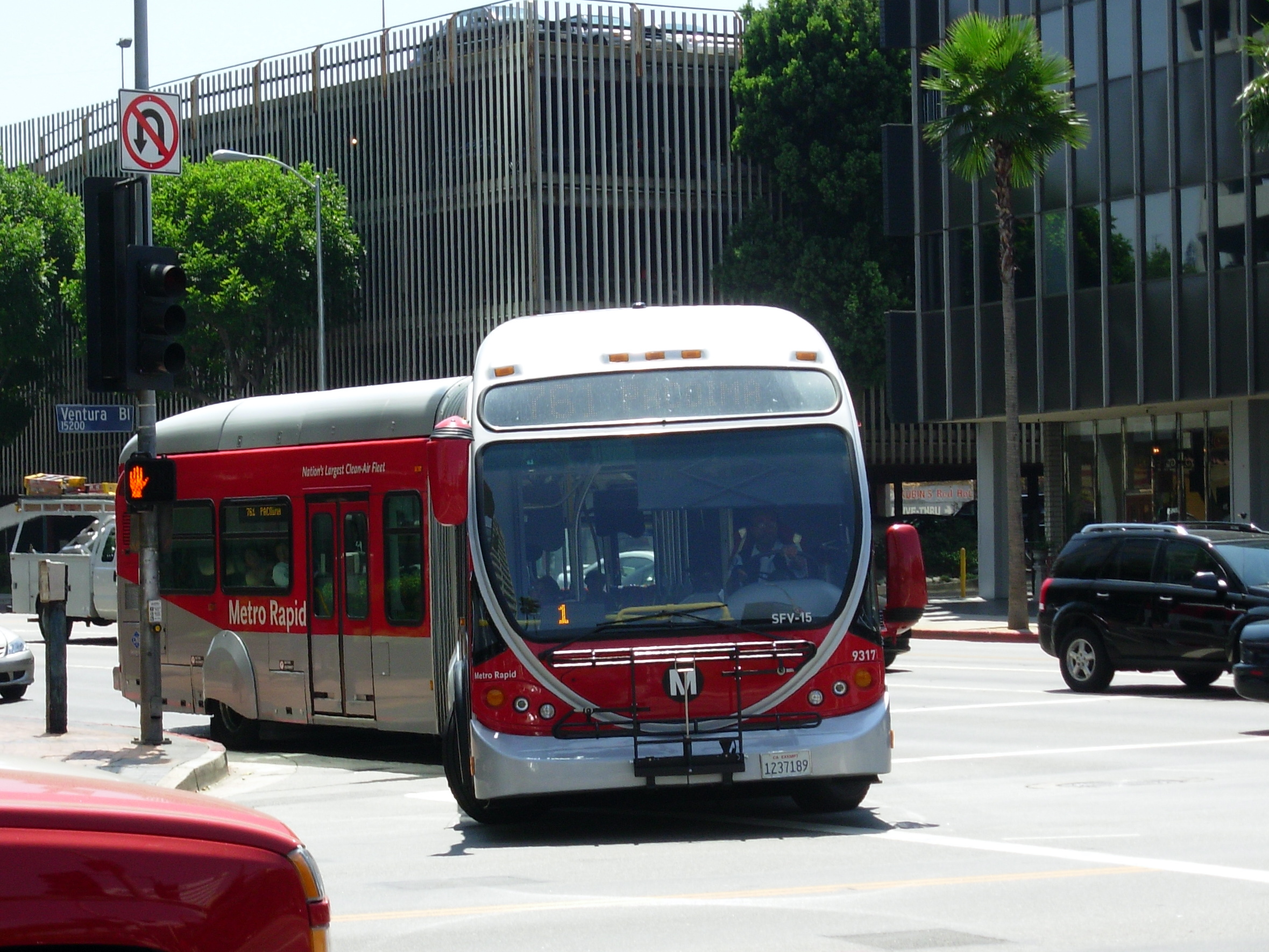 The Metro Rapid is similar to strategy #3 in Pantheon’s scheme, or actually one step further down, because it doesn’t have exclusive right-of-way but does influence signals.  One way to think about the Metro Rapid is that it answered the question:  “What is the best level of rapid transit that we can afford to offer all over the city, now?”  When anyone complains that the Metro Rapid isn’t everything rapid transit should be, I agree, but in the same breath I point out that 700 route-miles of it came into existence in less than a decade, and it’s rather precision-designed to be the best rapid transit that could be delivered at that pace.

That’s always the core of these debates for me.  I like riding trains more than riding buses, but I like a big network that covers the whole city even more than I like riding trains.  If you compare the Metro Rapid to the citywide rail network of your dreams, sure, it’s inferior.  But Metro Rapid exists.  You can use it right now.  And while I disagree with some of the compromises made, I give MTA a lot of credit for getting it done.

Returning to Pantheon’s schema, there’s no denying that there’s a tradeoff between expensive and wonderful service to a few places vs. less pleasant but functional service that covers most of your city.  There’s also a tradeoff between expensive and wonderful service for your grandchildren vs. less wonderful but functional service that can be there next year, for you.  The Metro Rapid is especially useful as a model of the latter extreme, which is one reason so many North American cities are now working with the concept.  Los Angeles wants it all, but if you feel MTA should focus most of its energy on getting subways built, remember that they tried that approach in the 1980s, which caused a massive backlash from both bus riders and taxpayers.  Given the history, the politics, and the incredible technical challenges of building transit in Los Angeles, I think MTA is doing a good job.  The Metro Rapid is an especially important model that deserves to be understood, and appreciated, for what it is.  Sure, it’s inferior.  Sure, it’s compromised.  But it exists!

UPDATE:  Nothing in this post should be read as implying that the current or recent levels of funding for transit in the US are adequate, or that the US should not be aiming to build transit at a more European or East Asian pace.  A sudden dramatic expansion in the money available for transit would obviously change many corridor-level debates, shifting many current recommendations in the direction of higher-quality options.  On the other hand, even such a renaissance would not eliminate the crucial role of Bus Rapid Transit at least as an interim solution, because in such a scenario, corridors that currently do not justify any project would rise to the level where at least a Metro Rapid would make sense.

44 Responses to Bus-Rail Debates in a Beautiful Abstract City, and in Los Angeles

You are here: Home › Bus-Rail Debates in a Beautiful Abstract City, and in Los Angeles