If you think on-street Bus Rapid Transit can never be acceptable, have a look at the new “Swift” project in Snohomish County, the suburban area north of Seattle.  The local agency, Community Transit, has a slick but very informative presentation, including a great video, here.  People who think BRT can never be good transit really need to watch the video.  It’s definitely a sales pitch, but it gives a good overview of the system and shows some of why BRT projects have such appeal, especially in outer-suburban areas where densities don’t support rail, at least not yet.

Swift embodies most of what BRT can be, toward the higher end of the “look and feel” quality spectrum, even without fully exclusive lanes.  There’s an intention to add some exclusive lanes in the future.  The political reality, especially in postwar suburbs, is that you often can’t win the battle for an exclusive lane until you’re already showing some ridership outcomes.  There is some modest signal priority.

Swift runs for about 16 miles mostly along Pacific Highway, which is a classic suburban strip-development boulevard.  The north end of the corridor is Everett, which mostly developed before World War II and thus has the kind of inner city fabric that people love to gentrify.  The south end is Aurora Village on the county line, where you can connect to King County Metro services (also increasingly fast though not at Swift’s standard) to get on into Seattle.  (Swift is not the meant to be the main service for travel all the way from Everett to Seattle; Sound Transit express buses do that, supplemented by the very occasional commuter train.)

Because it’s the old highway, Pacific Highway has a lot of relatively old car-oriented development.  Before the parallel Interstate 5 was built, anyone driving between Seattle and Vancouver BC went down this street.  This classic old highway from early in the car era offers quite a bit of redevelopment opportunity.  It will be interesting to see if anything happens around stations in response to the sudden increase in mobility. 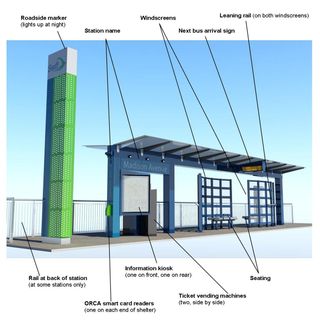 Swift looks like an important step in the ongoing effort to reduce the experiential and practical differences between bus and rail.  It has the usual BRT best-practice facilities such as stations of light-rail quality, sleek articulated buses, etc, but it also does a couple of important things that are not yet common practice in the bus industry, notably:

The presentation looks good, the choices they’ve made are understandable given their environment, and I wish them the best.