If you want to live in a city with fewer cars, how do you get there?  What do low-car cities have in common?  Anything?  Or are there in fact different ways to reach low car-dependence, demonstrated by very different cities achieving the same high scores?

All these questions came to mind as I perused Wikipedia’s helpful list of the US cities over 100,000 population with the most zero-car households (thanks to commenter Alon Levy).  I find the list so interesting that I’m just going to copy all of it here, then add some thoughts at the end.   The figure given for each city is the percentage of households that do not own a car.

The list is populated from the excellent Carfree Census Database, which also covers much smaller cities and a range of similar metrics.

An obvious caution: These are incorporated cities, which are things of very unequal size and shape bearing little relation to the organic form of urban regions.  For example, Los Angeles at #49 would score much higher if the vast low-density San Fernando Valley were not part of the incorporated city, and high-density innermost suburbs like East Los Angeles (#39) were included instead.

If I then look across the whole list and try to identify factors that
seem to explain, in different mixtures, each city’s presence on the
list, it seems there are three:  age, poverty, and dominant universities (i.e. universities that are large relative to the size of the city).
We might posit that these are the three most reliable paths
low car ownership at the scale of an American city of 100,000 or more.  Other things matter too — obviously, it helps to be part of a larger urban agglomeration that delivers more transit service and adjacent activity.  But every city’s presence in the top 50 has an obvious explanation in one or more of these three factors.

Most cities on this list display two or more of these factors, but a few are models for just one of them.  San Francisco is on the list because of age — a rare western city largely laid out before the car-dominated era, and thus by far the densest big city in the west.  Berkeley is there because it’s a small city with a big university.  Many cities are there because of relative poverty, including most of the cities that would be on everyone’s list of America’s toughest urban reinvention challenges.

It looks like the most common path to low car ownership is to be an old city.  Many big cities on this list seem to be ranked by the sequence of
urban settlement: northeast first, then midwest and south, then west
coast, with just the oldest cities of each region rising onto the
list.  An American city that reached its present shape by 1940 is going to be similar in form to a lot of European cities of the same age, both in the range of urban ideas expressed in the city’s design and in the transport modes for which it was optimized.  Urban form determines whether owning a car is essential, or just helpful, or a nuisance.  Obviously, urban forms that make car-free life easy are found most reliably in cities built when nobody owned cars.

Age, here, gives us what we would now call “density plus design,” to use Robert Cervero’s term.   Thanks to the New Urbanists and their progeny, we (arguably) know how to design new cities that work like old ones, but we don’t quite know how to make them happen economically. 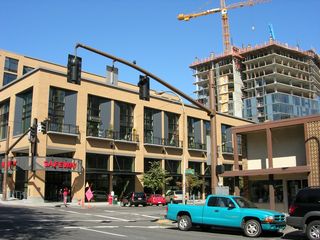 So here’s the question:  How long will it take for a city that lacks age, poverty, or dominant universities to achieve the kind of low car ownership that these 50 demonstrate?  How soon, for example, will a city be able to create a combination of density, design, and mixture of uses that yields the same performance as an old city that naturally has those features?

Portland is probably the most promising such city in the US, and it’s not on the list.  Only 14% of households there don’t have a car, so it’s probably well down in the second 50.  Like many cities, Portland has been doing everything it can to build a dense mixed-use urban environment.  It’s the sort of city that convinces the Safeway supermarket chain to rebuild their store with townhouses and residential towers on top.  But while people are moving into the inner city, they don’t seem to be selling their cars when they do, nor do they seem to be going to work by transit.  (I wish I could find the zero-car-household rate of Vancouver, Canada, because I suspect it may be the only new North American city in the league of the US top-50 on this metric, as it’s the only one to have built great masses of urban mixed-use density entirely in the last few decades.)

As always, this is just one metric.  Very few cities would say publicly that they want to increase the number of no-car households, because the concept still sounds radical to too much of the population.  Usually, when I talk about the benefits of mixed use and density, I say that car ownership can decline, but I usually emphasize households being able to share one car (not counted in the above metric) rather than households embracing a zero-car life.

But zero-car households remain an interesting metric, at least for the idealists out there.

How much are zero-car households constrained by overly abundant residential parking?  It’s still hard to sell a modern tower unit without a parking space included, even though there are many such units in pre-car cities like Manhattan and San Francisco, and many are quite desirable.  What would it take to replicate that desirability in new inner cities like Portland’s?  Couldn’t it be done at least in the name of affordable housing?

62 Responses to Three Paths to a Low-Car City

You are here: Home › Three Paths to a Low-Car City