Can good planning help address the grievous problems of the Palestinian territories, including the challenge of conceiving its patchwork of lands as a viable state? My friend Doug Suisman, a Los Angeles architect in private practice, has been working on the problem for years, through a remarkable project called the Arc. The New York Times profiled it five years ago.  Despite all the bad news from Israel and Palestine since then, the work has continued.  The idea is to have a plan for the urban structure and transport infrastructure of a Palestinian state, something that’s ready to go when an independent state is created and that can even be part of the run-up to independence. 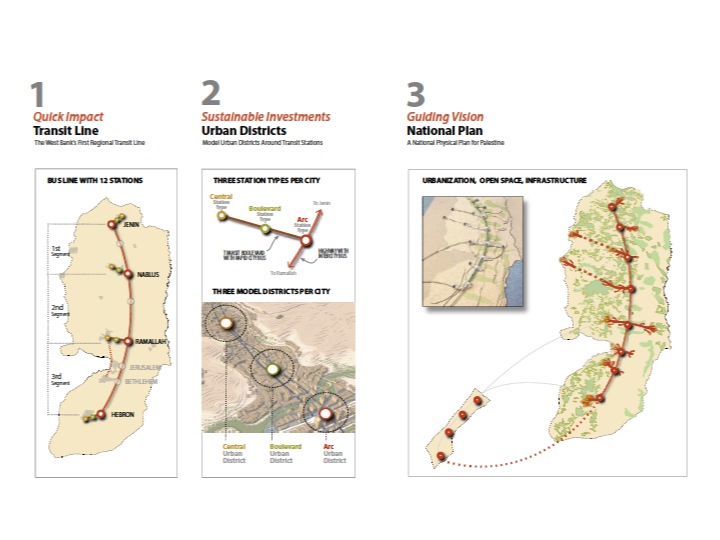 As often in the developing world, a type of Bus Rapid Transit is a key early move, with rail further in the future.  The Arc’s planners understand the need for a “Quick Impact” project that will show a transport benefit fast, and an intercity form of Bus Rapid Transit linking the West Bank’s major centers makes sense if that’s the objective.  Compared to the transport options today, even a compromised BRT would be a striking improvement.

Doug recently updated me on this via email:

[W]e’re trying to keep awareness of the project high in hopes that the Obama administration’s negotiating team will see fit to incorporate the Arc into its diplomatic strategy … . The 8-minute video is a quick refresher. You may be particularly interested in the short- to medium-term transit projects we have
proposed: http://friendsofthearc.org/storage/arcdemoproj.pdf

Five years ago, proposing swift regional inter-city rail with connecting BRT service at each major Palestinian city – combined with medium density development along the BRT lines – may have seemed somewhat foreign for the region, but as you know in the interim Istanbul has opened 2 BRT lines, Amman is moving ahead pretty quickly with its own BRT system and impressive master plan, and Dubai opened its Metro with plenty of bus connections. Maybe transit and design can, after all, be part of the peace equation!

In some form it will have to be, so it’s smart to be thinking about it now.

Christchurch: An Animated Quake Map
Transit Network Maps: Draw, and Market, Your Own!

12 Responses to Palestine: Time to Think About Transit?

You are here: Home › Palestine: Time to Think About Transit?