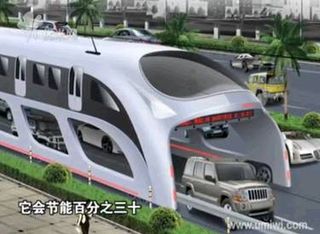 Chinese designers have come up with an innovative cost-effective public transport system: the tunnel bus.

The remarkable bus straddles two lanes of traffic, allowing cars to drive underneath while it carries up to 1,200 passengers.

It’s environmentally sound too because it runs on electricity, using a state-of-the-art charging system. Called relay charging, the roof of the bus conducts electricity and contacts special charging posts as it moves along.

Engadget links to a video in Chinese explaining the concept, which is pretty clear even if you don’t know Chinese.  A trial line is planned in Beijing, so we won’t have to debate it in theory for much longer.

But this is interesting:

It’s cost-effective because there are two ways it could operate: first off, special tracks could be laid into each side of
the road, like a tram.

Or secondly, simple coloured lines could be painted onto the road for it to follow automatically on conventional tyres. There’ll be a driver on the bus at all times, though.

I’m not sure how that makes it cost-effective, but it does have the effect of reducing the bus-rail distinction an almost academic quibble.

Either way, this is going to be a large structure resting on narrow wheels.  It could be on rubber tires but linked to an optical-guidance system (sensors on the vehicle responding to a painted line on the pavement) and the effect would be the same as if it were on rails:  a controlled path with little or no lateral motion.

29 Responses to The Chinese Tunnel-Bus, or Train, or Whatever

You are here: Home › The Chinese Tunnel-Bus, or Train, or Whatever