[Note: This post is from 2010 and has not been updated to reflect more recent developments, including the acquisition of WalkScore by Redfin.]

The Conservative Planner [blog site no longer active] has a thoughtful attack on WalkScore.com‘s methodology for calculating a simple “walkability score” for any neighborhood in America.  He’s found several examples where WalkScore has given a high score to a place that’s clearly hostile to pedestrians when viewed on the ground.

One only had to take a stroll around the Hilton in downtown Atlanta to see the inherent flaws in this online tool. Type the Hilton’s address in Walk Score (255 Courtland Street NE, Atlanta, GA) and it will tell you that it is a “86 – Walker’s Paradise”.  [JW:  Actually, it now says “86 – Very Walkable’] 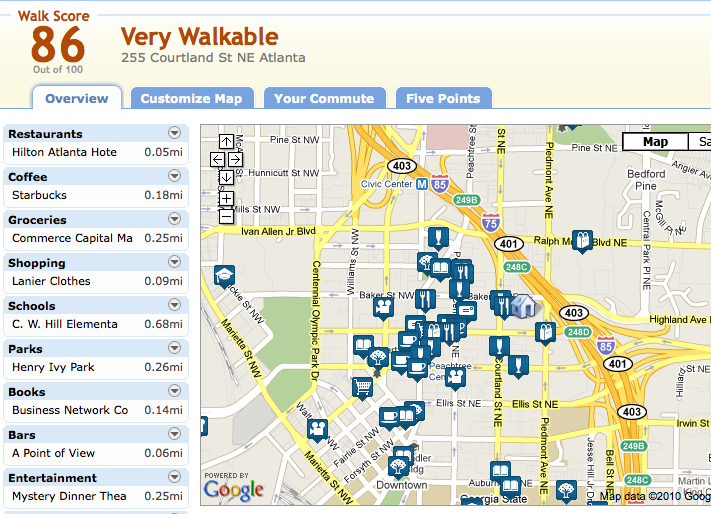 Nevermind the fact there are 4- and 5-lane one-way streets with high speed traffic surrounding the hotel. Interstates 85/75 runs to the north and east of the hotel and is a major pedestrian barrier. The restaurants that are deemed by Walk Score to be nearby and within walking distance are buried within the Marriott and Hilton hotels, which are 1960s/1970s behemoths. It is hardly a walking paradise; it may be in a downtown area but the street system is strikingly suburban.

Walk Score should not be used to analyze how walkable an area is as it does not consider the three most critical factors of walkability:

1. Connections: Walk Score can’t tell if sidewalks exist or not. It can’t even evaluate if there’s a street to connect to a destination that it tells you is within a walking distance of your address. You might need a machete and steel-toed books to walk to the doctor’s office.

2. Actual Route: Walk Score measures crowflight distance, not actual walking distance. I live in a neighborhood that has several destinations within a 1/2-mile radius. Too bad it takes me more than a mile to walk to them because of the lack of a pedestrian system along a 7-lane arterial highway with no crosswalks and poor connectivity despite its location within a streetcar suburb.

3. Land Use/Design: You could have the most “walkable” area according to Walk Score, but if you’re walking in front of a Walmart or other horribly designed commercial or residential strip, you won’t find the area to be very pedestrian-friendly.

These are all valid points, but if the Conservative Planner is really a planner, he/she would know how hard this bar is to meet.  Items 1 and 2 require that every local government in America provide a digitized map of its entire pedestrian network, showing not just which streets have sidewalks but where the usable off-road paths are, possibly including parking lots and vacant lots that you can safely cut across.  It should probably also show not just pedestrian signals but information on how they’re timed.  Many local governments don’t have this information.  Some have it only in the form of hand drawings on paper maps lovingly curated by the town’s sole “pedestrian planner,” who is allowed to play with these things in his broom-closet office so long as he stays out of the way of the road engineers.

As for item 3, “design,” well, sure, most of us would rather walk through a park rather than across a parking lot, but “design” by its nature refers to a subjective response, not a scorable metric.  (I’d make an exception for Robert Cervero’s use of the word in The Transit Metropolis, which I suspect was selected more for alliteration in his phrase “density and design.”  By “design” Cervero really means network connectivity — the Conservative Planner’s #2 — measurable, say, by the percentage of a 1/4 mile air radius that’s within a 1/4 mile walk on the pedestrian network; more on this here.)

What’s more, even if we could agree on a scorable metric, you’d need a nationwide database of exactly how every lot has been developed, continuously updated of course.  The closest thing we have to that is Google Street View.  Is someone working on a computer algorithm that will study every Street View photo in the country and assign a universally-respected “design score”?  If so, perhaps we can look for improvement.

Bottom line:  What the Conservative Planner is really pointing out is that prevailing data structures are designed to the needs of the prevailing mode — and right now, that’s cars.  Yes, every local government should have a complete database of its pedestrian links, and yes, they should send it to Google so it can be added to Google Maps.  Only then will we have an automated measure of actual walking distance.

Meanwhile, the sensible response from WalkScore.com would be to move their “How WalkScore Doesn’t Work” page to a more prominent place on the site.  A sensible response from the rest of us would be to remember that any methodology that reduces diverse inputs to a single score is not just an approximation, but an approximation shot through with value judgments that the score’s consumer may not share.  WalkScore could help remind us of this by showing, on the front page where it displays the score, the separate “sub-scores” from which it’s calculated, so that we can each decide if the factors are weighed just as we’d like.

UPDATE:  Matt Lerner of WalkScore tweets that they are working on these problems!

15 Responses to Walkscore.com and the Lure of the Single “Score”

You are here: Home › Walkscore.com and the Lure of the Single “Score”