Why do so many transit agencies not provide clear maps highlighting basic user-critical features such as frequency?  From a major transit authority located between the Arctic and Antarctic Circles, a planner proposes this explanation (links mine):

The current method [of designing marketing and information materials] is based on showing things to focus groups, and whatever wins the opinion poll seems to [get done].  Focus groups can kill good ideas.  [For example] if you show the Los Angeles 12-minute map [now a 15-minute map], it will probably be considered way too complicated.  However since the public’s image of buses [in my city] varies between zero and a bowl of tangled noodles, surely an effort like the 12 min map would be an improvement, despite the criticism re complexity.
Our marketing people are marketing people who work in transport, not transport people who work in marketing. So their knowledge of customers is probably better than mine, but their knowledge of the network (including its frequent service strength areas) would be inferior.
In contrast I take the view (influenced by the familiar themes on HT) that passengers worldwide pretty much have the same wants and needs.  So you can look at what works elsewhere, and apply it to relevant parts of the network here – no need to reinvent the wheel. You’d still have focus groups, but they would help with refining rather than saying yes or no.  I may grit my teeth at their lack of network knowledge; they’d probably think the same if I talk about marketing.
By “bowl of tangled noodles,” I’m guessing he means something like this (although this is not his city):

My experience is that good marketers and good transit planners have the same reaction to a bowl of tangled noodles — confusing piles of overlapping routes.  They hate them.  Both professions strive to reduce complexity, but often they don’t have the same notion of which fundamentals are most important.
For example, as a planner I’d rather see a map that uses a strong color like red to highlight frequency, whereas many published maps use red to highlight speed — even fast services that run for only a few hours and are thus useful only to a narrow market.  San Jose’s VTA map, for example, uses red to mean “express, but maybe not all day, and maybe not in both directions.”  To me as a planner, this gives a misleading impression that the red lines are the underlying structure on which the network is built.  In fact, that structure lies more in the green and blue lines. 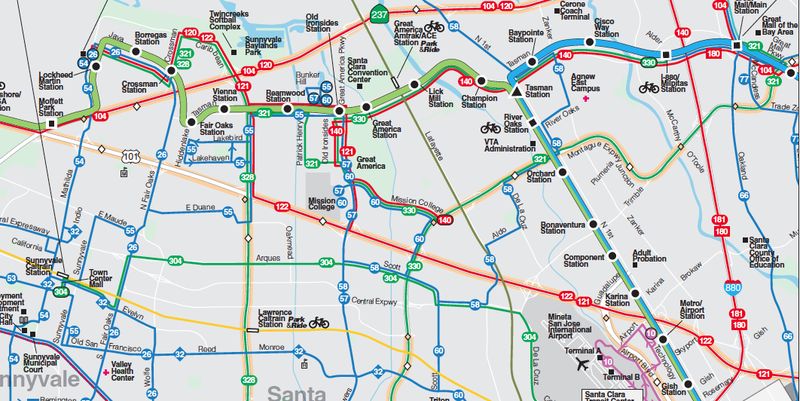 Others, as in this 2009 Portland map, prefer to use colors to differentiate the lines from each other, leaving little information bandwidth to convey other distinctions.  Portland’s 2009 map “highlights” Frequent Network lines by making the number bullet background yellow rather than white.  See?  Me neither. 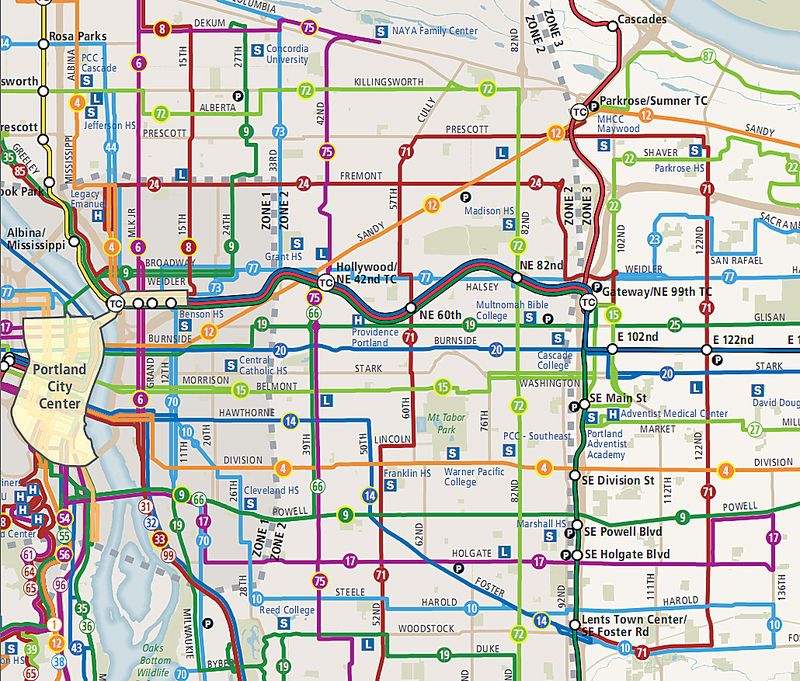 Also, on this Portland map, if you look at 39th Avenue (north-south a bit to the left of the center of the image) you’ll see a route 66 running for a little distance, clearly an exception to the overall all-day grid pattern.  This route is one-way and peak-only, just a few trips designed to handle commutes to the medical center.  To me, drawing it as such a solid line gives a misleading impression that it’s more important than it is, and partly obscures the grid structure of frequent all-day lines that’s most people are likely to find useful.  So my instinct is usually to render peak-only services as dotted lines, showing them but not letting them distract from the big picture.
UPDATE:  Fortunately, Portland’s map has been revised, effective September 2010, exactly along the lines that I’d have suggested!  (Thanks to Nathan Banks for the update.) 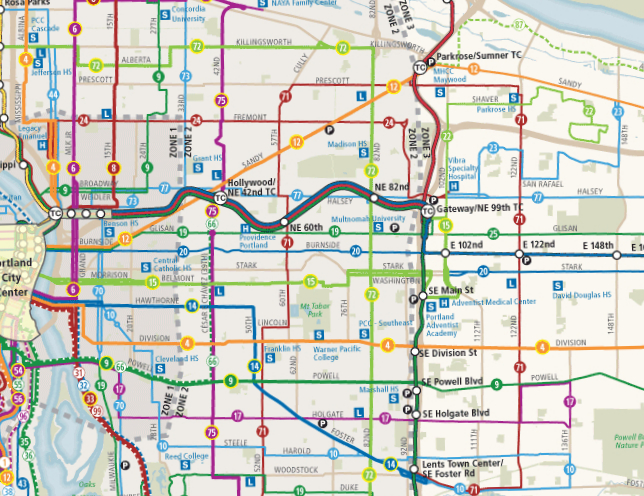 The near-invisible yellow dots are still there, but Frequent Network lines are now drawn slightly wider.  See the difference?
Thanks to years of diligent planning, and a high tolerance for connections, Portland’s network is not a bowl of tangled noodles, though the 66 is a step down that slippery slope.  Still, even in Portland, these differences arise between the planning perspective and a marketing perspective on what’s important to show on a map.
I would especially love to get comments from transit marketing professionals on this.  Confidentiality policy is here.  Feel free to use email, via the link under my photo –>

21 Responses to email of the week: marketing a “bowl of tangled noodles”

You are here: Home › email of the week: marketing a “bowl of tangled noodles”