A short draft chapter from the book, overlapping the content of this recent post but with an extended BART example that I hope readers will enjoy and have comments on.

In 2011, cartographer Daniel Huffman thought it would be interesting to draw river systems as though they were subways.  Figure 1 shows part of his sketch of the Lower Mississippi.[i] 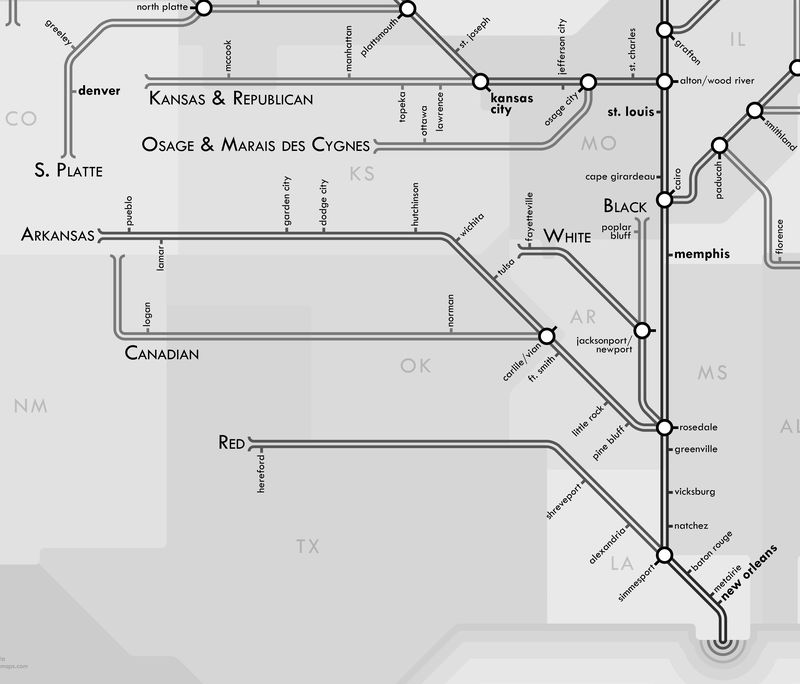 It’s a fun idea, but it also points to an important insight.  If you travel upriver by boat, you expect the river to get smaller and smaller.  Every time you reach a branching point, the volume of water in the two rivers in front of you is the same as the volume in the river behind you.   If you keep going, you’ll eventually reach a river that’s too small for your boat.  Transit is like that too, because branching always divides frequency.

This is one of those too-obvious points that’s easy to forget in the heat of a transit debate.  For example, in 2003, the Bay Area Rapid Transit (BART) system opened a new extension to San Francisco International Airport (SFO) and also to Millbrae, an important connection point with the Caltrain commuter rail system.  The basic extension, southward from San Francisco, looks like the top image in Figure 2.

It’s a triangle, with tracks from San Francisco to both SFO and Millbrae, and also direct tracks between Millbrae and SFO.

If you’re unconsciously thinking like a motorist, looking at this as though it were a highway map, it looks fine.  All the points on the map are directly connected all the others.  But transit can’t run all these connections at the same high frequency, because of the effect of branching. The actual pattern of service will have to be one of images beneath it.  In these images, line-width represents frequency. 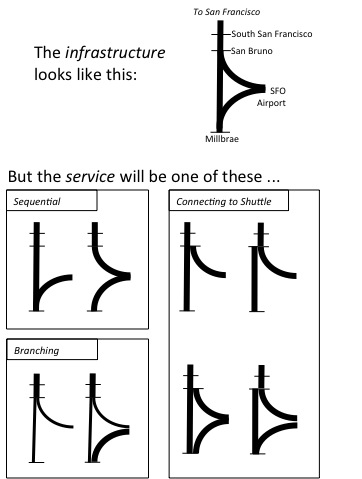 For example, suppose you want service every 10 minutes to both SFO and Millbrae, but you can only afford 10 minute frequency on the line through San Bruno and on to San Francisco. You have to run one of the two ‘sequential’ options in the upper left of Figure 2, either run all service to Millbrae via SFO, or all service to SFO via Millbrae.  Either SFO passengers or Millbrae passengers are going to hate you.

Finally, we can run everything every 10 minutes by forcing a connection.  One side of the loop would have a shuttle train, while the other would have through service.

There is one other option, though it’s not available for BART.   You could split the train in half, and send the front half on one branch and the rear half on the other.  This is very tricky; it requires a driver in position ready to take half of the train when it arrives.  It’s also hard to separate a train without at least a minute or two of delay, at least for the rear half of the divided train.

To sum up, we should suspicious whenever we see a branch drawn as though one line can effortlessly divide into two equal lines.  Often, such a branch will be called an extension, a very slightly misleading word because it suggests that an existing, known quantity of service is being extended.  In fact, a branch always means one of three things.  Either

Geometrically, it has to mean one of those things, and it may not be the one you prefer.  So before you decide whether the service is useful to you, or whether you support a proposed transit project whose map looks like this, you may want to ask which of those it is.

[i] A collection of these spanning most of the US’s major river systems is at http://somethingaboutmaps.wordpress.com/river-maps/

22 Responses to basics: branching (or how transit is like a river)

You are here: Home › basics: branching (or how transit is like a river)