From a longtime Canberra-based reader: 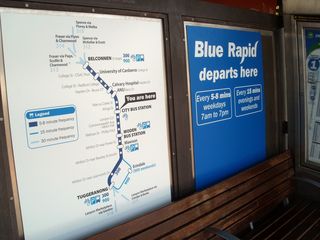 In your latest post on [San Francisco] bus wrap art, you refer to your fondness for colour-coding of buses, etc for different service.  For instance in Canberra, this would see the Red Rapid using red coloured buses, the Blue Rapid using Blue coloured buses, and so on.
[JW:  The Red Rapid and Blue Rapid are the two frequent rapid corridors that connect the major dense nodes of Canberra to each other, with widely-spaced stops.  They are the top priority for bus lanes and other speed/reliability improvements.]
Which I personally think is great in promotion of the service, making the service stand out – it also helps give a rapid bus (which isn't run solely on transitways) an identity akin to a light rail line.
However, I've always found that schedulers don't like it as it limits the general number of vehicles available to run a network. It also removes the ability to use a vehicle in one service type and have it continue its run on a rapid route – thereby removing a connection for some passengers  …  And I'm sure there's a whole stack of other reasons which schedulers and operators will through up in relation to this.
So, I guess the question is, given that this is more of an aesthetic improvement … do the benefits measure up to the costs?

Seoul, South Korea went a long way with this idea, branding all their buses with four colors that indicate different functions in the network (Trunk, Branch, Rapid, or Circulator).  Paint schemes are often used to distinguished closed Bus Rapid Transit [BRT] systems (systems where buses do not flow through onto other corridors, but remain confined within the BRT infrastructure.)

Los Angeles Metro has painted their fleet two colors, red for Rapid and orange for Local.  Even with two colors, the "Local" is problematic.  Orange really means "everything but Rapid," including limited-stop and freeway-express services that wouldn't satisfy anyone's definition of a "local."
And even so, sometimes you see an orange bus on a Rapid line, or vice versa.  I've never seen a painted color scheme where this never occurred; sometimes the dispatcher needs a red bus and all he has are orange ones.  Sometimes an orange bus breaks down and the nearest available spare is red.  You'd rather we didn't send out a bus at all?
I do think, however, we could be doing much more with signage to highlight color-based brands.

aaron renn on innovation
sydney: it’s 10 pm, do you know where your buses are?

39 Responses to email of the week: should blue lines have blue buses?

You are here: Home › email of the week: should blue lines have blue buses?