That's the nice slogan from a new Phillips Corporation initiative praised today in the Atlantic by NRDC's Kaid Benfield.  The Phillips think tank suggests that we can gather all the qualities of a "livable and lovable" city into three virtues:

Below is their graphic summary.  (The PDF [Download] is much sharper!)  Below that is a bit of affectionate heckling from me. 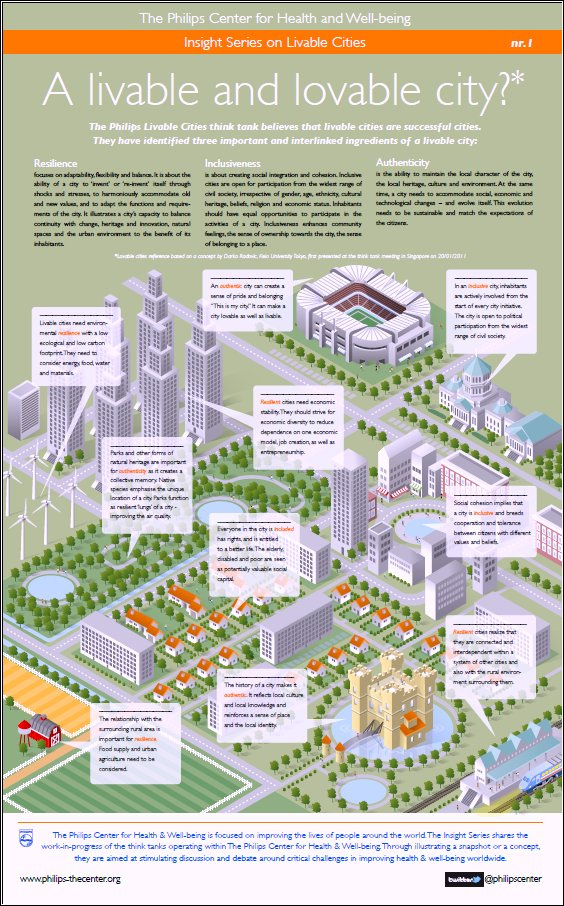 Personally, I have some practical discomfort with the framing of the Inclusiveness category because it is easily exaggerated into visions of a socialist paradise in which we have abolished competition.  When Philips says that "inhabitants should have equal opportunities to participate in the activities of the city," does that mean that when our city's team in the playoffs, we'll give out tickets by lottery rather than selling them, in order to avoid discriminating against the poor?  If we're talking only about nondiscrimination by extraneous demographic categories, fine.  But when you imply that you can neutralize the impact of differences in wealth, you lose so much of the politicial audience — at least in North America, Australia, and the UK — that you've probably lost the game.  This issue comes up often in transit, of course, notably whenever anyone suggests that in a capitalist economy, it's foolish not to use pricing to help citizens understand the intrinsic cost of things that they take for granted.  It's a tough one.

Note, also, the lingering contradictory message in their framing of resilience.  On the one hand, the train station signifies that resilient cities acknowledge their "interdependence" with other cities.  On the other hand, the emphasis on local farms and local energy generation suggests the opposite, that resilient cities aspire to greater and greater self-reliance.  This is philosophically interesting, especially because high volumes of international trade — including in food, which is the opposite of local self-reliance — are the most reliable mechanism that human society has found to prevent large-scale wars.

I make both of these comments in the spirit of meditation.  I am not claiming to know how better to define inclusiveness or resilience.  Rather, I'm just marvelling at how difficult it is.

the “cities vs suburbs” trope
basics: walking distance to transit

27 Responses to can we define “livable and lovable” cities?

You are here: Home › can we define “livable and lovable” cities?