Posted on May 5, 2011 in Information Requests, Marketing, Navigation, San Francisco 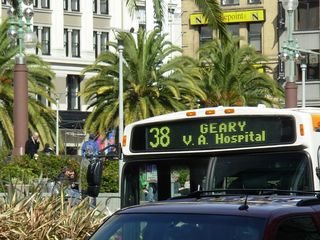 Perhaps this is a distinctly Zen sense of beauty, but it's also close to what mathematicians and scientists often mean by elegance.

If you know San Francisco, you know where Geary Blvd. is and you probably have a sense that the VA Hospital is out toward the west end of it somewhere.  So this sign tells you a surprisingly complete story about what this bus does.  This makes it useful not just as information but also as gentle passive advertising.  Anyone can notice this sign out of the corner of their eye, and pick up a bit of information about the transit system ("there's a bus heading out Geary from here … good to know …")

For decades, San Francisco and Portland have used this simple style for all of their signage.  I discussed how it works in Portland here.  Even back in transit's "age of vinyl," San Francisco used separate roller signs for name and destination, so that they could present the same information in the same pattern consistently.  (Photos were also blurrier back then!)

Many other cities, including Sydney and Seattle, habitually turn it upside down, so on the 38 above they might have said "38 VA HOSPITAL via Geary."  A Sydney sign might read "380 DOVER BCH via Oxford St."  I find that less intuitive, because the path the bus follows is usually more useful than the final destination in determining if the service is useful to you.  Still, it's understandable in Sydney where street names change so frequently that it's hard to associate bus routes with them, as "38 GEARY" does.

But this post is actually an information request.  Have you seen bus exterior signs that convey a lot of information briefly in an interesting way, either examples of the above or of other ideas?  If so, please link or send them to me.  I'm collecting them for a project.

45 Responses to bus signage can be beautiful

You are here: Home › bus signage can be beautiful