Posted on May 21, 2011 in Education, Maps, Simulation, Urban Structure 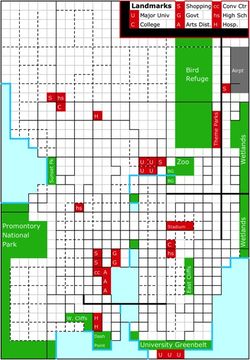 Did you draw maps of fictional cities when you were 8 years old?  If so, you and I are part of a near-invisible, uncounted minority.

If that's you, I dare you not to be interested in this!  Even if you just enjoy maps of other cities, here's a chance to study a city you've never seen before.

For the transit planning course that I'm developing, I've created a fictional city that's designed to present a range of major transit issues, while also being an interesting place.  I considered using a real city, but in my experience, planning for a real city slides too quickly to details that obscure the big picture of how a good network works.

My introduction to the fictional city is here:  Download Game Newport intro (.doc)

Both documents are covered by the assertion of copyright that covers all of this blog's material.

I'd love feedback, especially about these questions:

Have fun!  The premiere of the transit planning course is in Surrey, British Columbia near Vancouver on June 9-10.  Last I checked there were a few places left.  Details here.

Finally, I'm surprised at early comments that I don't have enough freeways!  It's not a freeway dependent city, by choice.  (See the .doc file above for more on the freeway wars.)   But freeways that run only on the periphery and don't connect into the core are common enough in cities of this size class.  See:

The last two of these are not, by any stretch, leftist car-hating enclaves.  In fact, they're exceptionally car-dependent.  Still, no freeways near the core.  It's possible!