Rain in Seattle.  Sun in Los Angeles.  Fog in San Francisco.  Wind in Chicago.  The endless summer nights of Helsinki or Edinburgh.  How could we navigate without our stereotypes of the urban air and sky?

(Yes, this is one of those personal and literary ruminations about urbanism, almost free of transit content, cross-posted from the personal blog Creature of the Shade.)

In his odd novel Voyage to Pagany, the great modernist poet (but not novelist) William Carlos Williams tells of a self-absorbed man riding through Europe by train.  At one point (adequate fragments here) he's delayed in the middle of the night in Genoa.

Genoa.  The name sounded hollow, depressing as the coldly sulphurous gallery through which he was passing, baggage in hand …

The placename is a sponge for first impressions, and never quite shakes them off.  For Williams's hero, "Genoa" means "night, don't know anybody, don't speak the language, poor me."  Or to reduce this (literally) benighted city to one sentence:

I will never see the sun in Genoa.

But here's what's odd.  When I read this chapter in graduate school, the only experience I'd ever had of Genoa was of passing through it at night on the train.  Today, that remains my only experience of Genoa, so even now, when someone says "Genoa" I imagine a city at night.  Northwest Italy isn't high on my list of urgent travel destinations, so it's quite likely that I too will never see the sun in Genoa, and hence never dissociate the city from this absurdly accidental recollection.

Professional thinkers-about-cities would never reduce their impression of a city to a story of something that happened to them there.  But everyone else does this quite naturally; when I ask a person on the street what she thinks of a city, she'll often mention some joyous or traumatic recollection, presenting that as her lasting definition of the place.  We urbanists are supposed to take pride in having a larger, grander view.  But I bet most of us carry these silly but useful attitudes, at least when we get far down our personal list of Cities We Want to Think About.

Right now, you see, I don't feel a specific need to expand my awareness of Genoa, except to the extent that I want to expand my awareness generally.  I wouldn't pass up an expense-paid visit to Genoa in the daytime, and would surrender my prejudice happily if I did.  But failing that, the prejudice is working for me.  It's painting a relatively unfamiliar part of Italy with a few touchstones of mood.  Thanks to these quick associations, my near-total ignorance of northwest Italy, while still near-total, is packaged and marked with a couple of personal baggage tags, so I can haul it around as a familiar without having to look inside.

The baggage tags are personal, but they're also authorized by the Greater Truth of Literature.  Anyone can pass through a city at night, but I passed through Genoa at night just as William Carlos Williams's hero did decades ago.  I have a similar tag stuck on Bologna, where I once had a scare of thinking I had missed a late night train connection and would be spending the night on a station bench.  I'd have forgotten the episode by now had Robert Dessaix's hero not had exactly the same experience, in his fine novel Night Letters.  Nonfiction lies all the time, but fiction makes no truth claims and therefore can never be disproven, so it can sell itself as a Gateway to Deeper Truth even when it's just the whining of a man stuck in a train station.  Williams and Dessaix tell me that I wasn't alone in my nocturnal and unwanted visits to Genoa and Bologna, that these experiences actually Resonate with the Human Experience.  So I remember them.

Thus authorized, it feels good, at least to me, to permanently associate cities with atmospheric conditions and their related moods.  Even dealing with cities I know well (Seattle, San Francisco, Los Angeles) I find a pleasure in wrapping each in the stereotypical weather condition (rain, fog, sun, respectively) and experiencing all variations from that as an engaging nuance.  For cities I don't know it's much easier: for me it's always night in Genoa.   These simplifications are silly but seem useful in maintaining a mental structure of reality on which more interesting and reality-based thoughts can sometimes sprout. 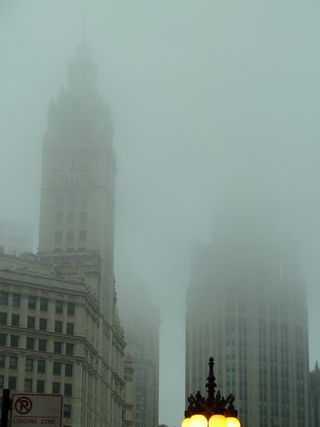 Now and then I notice myself consciously choosing a new atmospheric prejudice.  I was in Chicago over Memorial Day weekend 2011, and have chosen, for now, to think of Chicago as a city where towers loom in ominous chilly fog and thunderstorms.

On my stay there I had two days of that, followed by two days of hot sun.  The fog and storms, I decided, are the Chicago I want, because they allowed me to experience the downtown skyscrapers as overpowering, exactly as they were intended. Structures vanishing into the clouds are not just tall, but unknowably, maybe infinitely tall.

Chicago was built to turn a vast frontier into commodities and profit.  The many rail lines emanating from it look like force-lines of a blast, so to be at the center of the blast is, well, like the end of a science fiction film when we finally get inside the Center of Ominous Power.  I wanted it to be grand but in mysterious, overpowering, intimidating way.

My ideal Chicago, in short, is a meteorological projection of a conventional story about what makes Chicago unique.  So I feel briefly wise, though actually just prejudiced, when I look at my images of Chicago in such conditions, as though the city is telling me a story I want to hear … 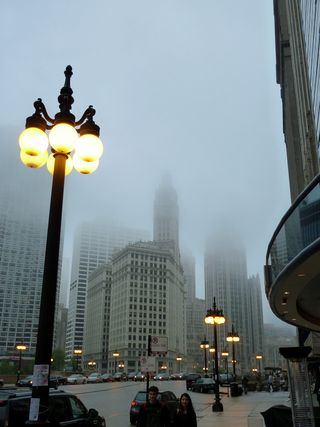 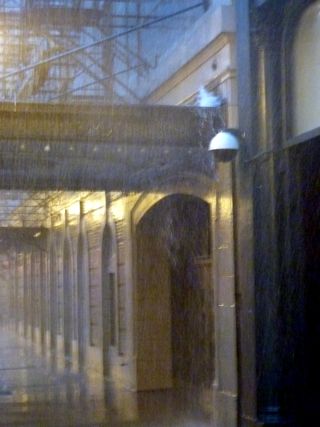 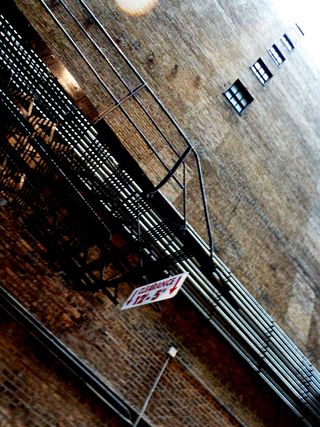 In such a perfectly symbolic city, a photo that might otherwise be a joke, "Christ the Steakhouse," isn't funny at all. 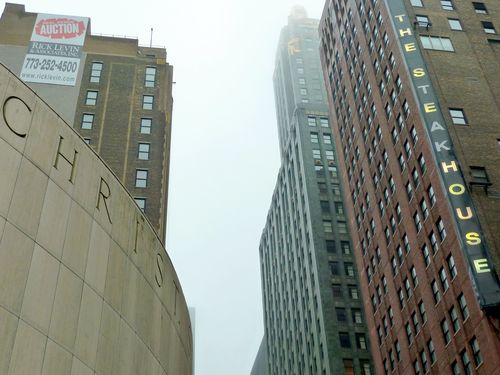 Nor can "Time" be just the name of a media corporation. 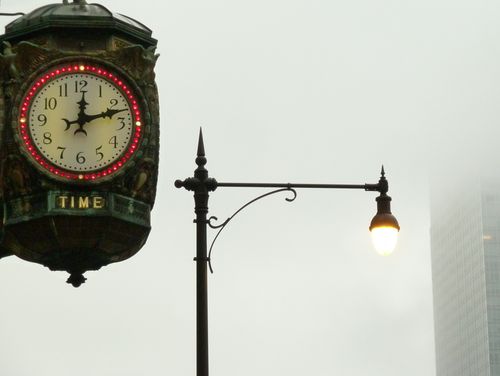 Then the sun came out, and it was all flatter, more like a city anywhere in the midwest.  On a long hike north from the loop, Michigan Avenue looked like Singapore's Orchard Road, Lincoln Park looked like a number of great midwestern city parks, the Clark Road business districts looked nice or not-nice in familiar ways, and the only glorious uniqueness was that my hike ended at a well-known religous site for green urbanists: Wrigley Field, a Major League Baseball Stadium with Practically No Parking.

By then, it was too dark to photograph, so as I sorted photographs in an about-to-close Starbucks in what would have been the shadow of the stadium walls, I thought "this is nice, Wrigley Field at night," which is perilously close to "Wrigley Field is night."   And indeed, not being much of a baseball fan, It's quite possible I'll never see the sun there.

what maps should be at stops and stations?
who’s leading the non-car renaissance?

14 Responses to permanent weather and the civic image

You are here: Home › permanent weather and the civic image