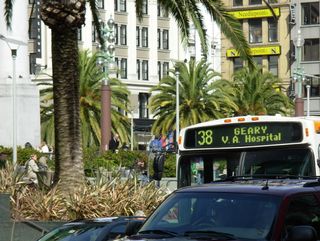 Major San Francisco transit lines take longer than they did a century ago, as they have been obstructed by traffic and slowed by heavy passenger loads using (until recently) inefficient pay-as-you-board methods. A New York Times piece by Zusha Elinson lays out the statistics.

(It's important to clarify, right away, that this has nothing to do with streetcars as a technology.  You could easily be misled by this subtle bit of anti-bus bias:

In 1920, the F-Stockton streetcar carried passengers from the Financial District at Market and Stockton Streets all the way to the Marina at Chestnut and Scott Streets in a zippy 17 minutes. Today a very similar trip on the 30-Stockton, the successor to the F-Stockton, takes a half-hour if the stars are properly aligned.

In general, streetcars replaced by buses have slowed down more, over the last century, than those that remained streetcars, but that's an expression of how much more was invested in streetcars than in buses.  The main lines that use the Market Street Subway — J through N — have picked up or shed just a couple of minutes from their 1920 times, even though back then they ran on the surface along Market St (about 3 miles) while now they're in a subway, effectively functioning as rapid transit.  No such improvements were made for streetcars that became bus lines, so of course their performance deteriorated more.  In fact, the 30-Stockton relies heavily on maneuverability in unpredictable Chinatown traffic; a streetcar in exactly the same traffic, unable to move around obstacles, would be even slower and less reliable.)

The real message of this story, though, is the need to have a conscious intention about the speed and reliability of transit.  Highway planners ruled the late 20th century with their clearly defined notion of "Level of Service" or cars, which mowed down opposition through its simplistic A-F letter-grades.  Just after 2000, the Transit Capacity and Quality of Service Manual sought, at first, to claim this same authority-through-simplification for transit.  But while the TCQOS is a spectacular reference guide, few in the business believe that a single A-F score can capture the many important ways that transit succeeds and fails.

My own work in this area has always advocated a stronger, more transit-specific approach that begins not with the single delayed line, but rather with the functioning of an entire network.  Don't just ask "how fast should this line be?" which tends to degenerate into "What can we do to make those forlorn buses move a little faster without upsetting anyone?"  Instead, ask "What travel time outcomes do we need across this network?"  Or turn it around: How much of the city needs to be within 30 minutes of most people?  – a question that leads to those compelling Walkscore travel time maps, which are literally maps of individual freedom.

A network speed standard would identify necessary speed standards for each service type, but especially for the Frequent Network, because high frequency means greater impact of delay — both on passenger freedom and the agency's bottom line.  We* used this approach in a Seattle Transit Plan study about 7 years ago:

1.  Define the Frequent Network (every 15 min or better, all day, every day), including any segments that are "Rapid" (faster with fewer stops)

2.  Define the policy operating speed standard for each product (frequent local vs rapid)

3.  Map the existing scheduled speeds on each segment against this standard, creating a map with screaming red segments meaning "deficient."

4.  Prioritize interventions to improve transit speed based on those deficiencies.

This is quite different from a classic cost-benefit approach in which we count the riders currently on a segment and assign value based on their total travel time saved, because it acknowledges that (a) a dysfunctional segment is probably driving away customers regardless of how many are on it now and (b) the outcome is the network, not just a single line.

We had a lot of success with this in Seattle at the time.  Once the deficiency map was drawn, engineers noticed segments that they hadn't identified as problems before, and went to work on fixing them.  Note too that the method cleanly separates problem from solution.  Don't start with what you think is possible.  Start with what you need.  Define the absence of what you need as a citywide problem that affects the whole network.  Then fix those deficiencies.  If you're going to go to war with three businesses over "their" strip of on-street parking, you're more likely to break through the "big agency attacks struggling small business" frame if you're defending the entire city's transit system.

Remember: a line is only as reliable as its least reliable point, and a journey through a network is only as reliable as the least reliable of its lines involved.  So one localized problem affecting speed and reliability (such as stops too close together) actually affects a vast area, and drags down public expectations for an entire network product.  If it costs the agency money (as slower service always does) then it's also a direct detriment to the overall abundance of transit service.  That's the frame in which you win battles over three on-street parking spaces, a signal phase, or even an entire tranist lane.

San Francisco's Transit Effectiveness Project is, to a great extent, the culimination of exactly this thought process.  I remember in the 1980s or early 90s a time when Muni proposed to eliminate just one consequential bus stop;  17th & Mission.  The story became: "Big, bad transit agency launches personal attack on the people and businesses at 17th & Mission."  The TEP has worked to change that conversation, emphasizing that on high-frequency services, the speed of every segment is part of the whole city's transit outcomes.  The same process has made it easier to do a range of other locally-hated citywide goods such as removing parallel routes that were too close together.

*I was with Nelson\Nygaard at the time.  The project was the City of Seattle "Urban Village Transit Network" study of 2004, which became a foundation of the Seattle Transit Plan.