@humantransit In a place that is improving its transit but cannot yet draw a [Frequent Service] map by your ["every 15 minutes all day, seven days a week"  requirements], how would you draw the map?

When a transit agency first sits down to do frequent network mapping, this always comes up.  Not all services are frequent over the same exact span.  Many are frequent all day but not evening or weekend.  This the the normal outcome of a history of route-by-route and hour-by-hour service analysis.

[A Frequent Network policy will gradually enhance those analysis methods by bringing your focus to (a) the entire independent network instead of each route individually and (b) the entirety of the day rather than each hour individually.  Hour-by-hour analysis of routes is especially misleading because ridership at each time of day depends on service availability another time of day; you won't use transit in either direction unless it's available in both directions at times you expect to travel, and if you're not sure when you come back, you care about the abundance and extent of the whole evening service pattern.  This is why cutting evening service — which may have low ridership when analyzed trip by trip — can damage a route's usefulness throughout the service day.]

Meanwhile, how to draw the map?

1.  Start where you are.  If your current frequent service offering is only weekdays all day, then say that.  The map will still be useful.  If you can come up with some kind of minimum evening/weekend service commitment for those route segments (every 30?) then say that as part of the definition of the frequent product.  Meanwhile, you can use your long range planning process to articulate the need for a more robust service span on the Frequent Network, over time.

2.  Consider the larger principle, which is this:  Service that is more likely to be useful to lots of people for lots of purposes, and that are designed to work together as a network, should be more visually prominent.  Service that is highly specialized to a limited market should be less visually prominent, including peak-only services and any service that runs less than once an hour (or even every 30).  It's these occasional service patterns that make transit maps unbearably complicated — a problem easily fixed by ensuring that your map shows those ephemeral route segments but that they recede visually so that the more frequent network stands out.

It never makes sense to draw a route that runs three times a day in the same line that you'd use for service every 30 minutes all day.  The problem of such maps is the same: you weaken the meaning of a line on the map by using that line to refer to something so ephemeral and specialized, thereby implying that any line on the map may be equally ephemeral and specialized.  So use a different, weaker line for those services. 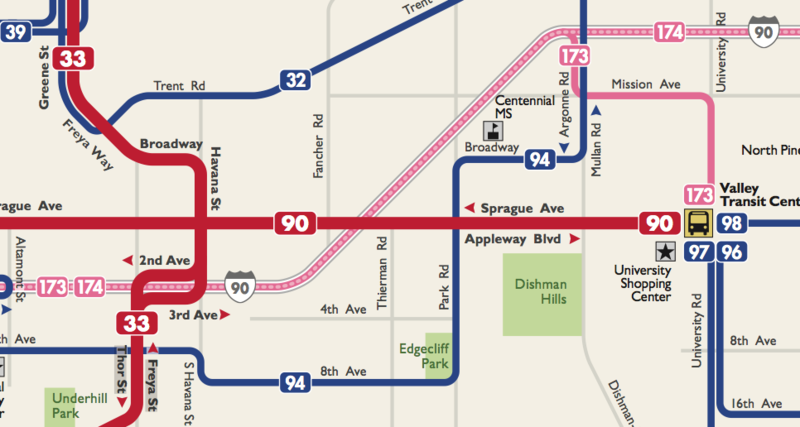 … and of Portland's, where a wider line is Frequent and peak-only lines are dashed with a white number bullet: 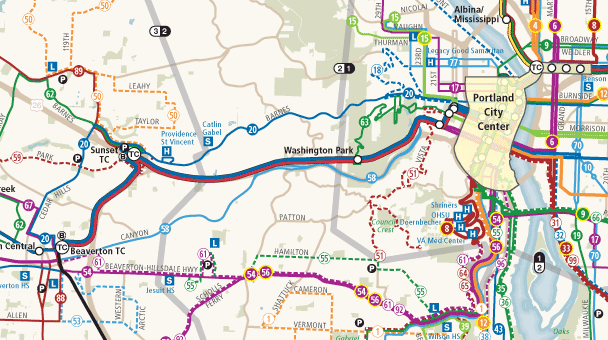 In both examples, more broadly useful services are more visually prominent.  Peak-only services recede (a thin pink line vs a wide red one in Spokane, a dashed line in Portland) so that you can see them but won't be distracted by them when you want to see the all-day network.  Both maps also highlight the Frequent Network in different ways.  Overall, I prefer the clarity of the Spokane map, because Portland introduces much complexity by trying to differentiate every route by color.  But both are good design responses to the basic problem, which is: Show me the services that are most likely to be useful!

More on this in Chapter 7 of my book.

7 Responses to some questions on frequent network mapping

You are here: Home › some questions on frequent network mapping