An intriguing email from Kenny Easwaran:

I was very struck by this post in which you try to generalize the geometric issues to show that some of these features of transit are really universal.  [JW: I also wrote this on the underlying power of grids in public transit.]

At the time, I was thinking of the various transportation systems we know of that aren’t designed by humans.  The main examples I could think of were things within the human body, and I noticed that things like the circulatory systems of animals and plants, and the digestive system of animals, seem to follow somewhat different trajectories from grids.  In particular, they either have a branching tree structure, or something more like an extended linear structure.

Of course, in these cases, it may have more to do with the drive system – the circulatory system is driven by a single central pump, and I don’t know if it has any sort of intelligent routing, which may make a grid system hard to operate.  It also seems to primarily ferry resources from two centers (the lungs and digestive tract) to all the rest of the body, so a tree structure may be the most efficient way to do this (like an old hub and spoke rail network centered on downtown).

At any rate, the reason I’m writing this e-mail now is that I just saw an article suggesting that the human body *does* actually use a grid system! 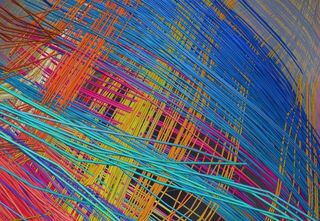 It’s rather weird: If you’ve ever seen a computer ribbon cable — a flat, 2D ribbon of wires stuck together, such as an IDE hard drive cable — the brain is basically just a huge collection of these ribbons, traveling parallel or perpendicular to each other. There are almost zero diagonals, nor single neurons that stray from the neuronal highways. The human brain is just one big grid of neurons — a lot like the streets of Manhattan, minus Broadway, and then projected into three dimensions.

Looking at the diagram in that article a little more closely, it seems that there’s a two dimensional grid structure, even though the brain is three dimensional.  There appear to be axes going from front toback, and other axes going radially from the “suburbs” through the central axis through to the “suburbs” on the other side, but no grid elements going around the periphery from left to right.  I guess there’s an interesting sense in which a three dimensional transport structure can be gridlike in two dimensions but not the third?

At any rate, I’d be very interested to hear your thoughts on any of these analogies!  (It might also be interesting to look at structures in ant colonies and prairie dog towns, to see how they approximate thevarious geometries of transportation that you think might be worth looking at, though they are probably more analogous to purely pedestrian cities, rather than ones with long transport tubes.)

I’d be interested in hearing everyone’s thoughts on this!  (Apologies for the new comment monitoring; it’s purely to combat spam!)

Image from the article.

15 Responses to email of the month: grids on the brain

You are here: Home › email of the month: grids on the brain